African safari at its best 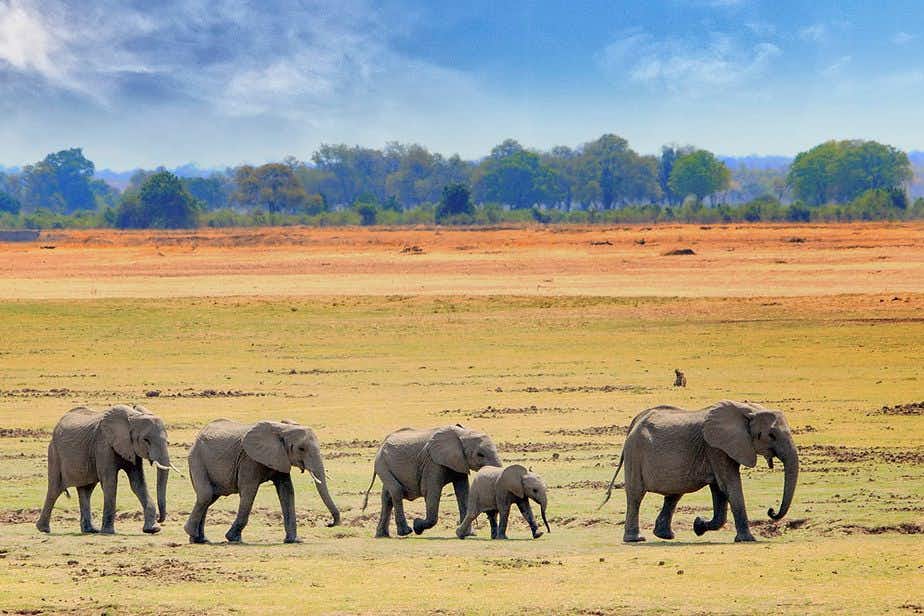 South Luangwa National Park in Zambia is one of the best places to go on safari. You've got a good chance of seeing the Big Five, but also the African wild dog and other wildlife.

Experts say the natural wealth of South Luangwa National Park is second to none. This part of Africa is less famous than other safari countries in Africa , but it’s slowly gaining popularity. One of the reasons it’s popular is because it’s not that busy yet, so you don’t come across many other tourists. You can drive for hours around South Luangwa NP and not see another car.

Traditionally the best time for safaris is in the dry season when animals go looking for water, but it’s now also being done at the start of the wet season. You can head out early in the morning, but also late in the afternoon, and even in the evening when different animals start their hunt. And the guides here have won awards for consecutive years for their knowledge.

This impressive nature reserve is known for its Big Five. Think of lion, leopard, African elephant, African buffalo and the white rhino or its brother the black rhino. Of this list, the leopard is usually the most difficult to spot, but the night safaris here give you a much better chance. In addition, South Luangwa is famous for another animal: the African wild dog. These live in groups and are seen here regularly.

South Luangwa is famous for its walking safaris. Your options depend on the season. The grass might be higher some seasons, so you can’t walk through it, or the river could have flooded its banks. A walking safari is an intense way to really experience Africa.

You could meet all sorts of animals, and you are closer to the action than when you’re in a car. You’ll get a chance to look at the flowers and smaller creatures such as insects. Walking safaris can be done in groups or with a private guide. Either way, there’s always a ranger with a gun to protect you.

A male lion on a night safari.

Night safaris are very special experiences. They are not allowed everywhere, but you can take one in South Luangwa. Just after the sun sets you drive around the park looking for wildlife. At the front of the vehicle is a guide with a spotlight to light up the darkness around you.

When he spots something, the driver stops, and you start looking for signs of life. A famous nocturnal animal at South Luangwa is the leopard. But you could also see other predators such as wildcats and common genets. You should also keep an eye out for the tiny elephant shrew (a kind of mouse) who might run across the road.

Multiple-day hike from camp to camp

Most walking safaris go for several hours. But you can also walk around for several days. You’ll trek from bush camp to bush camp. These camps are set up at the start of the dry season and dismantled before the wet season.

They are more luxurious than you would imagine of a camp in the middle of the African bush! These multiple-day hikes are a great way to explore South Luangwa. You’ll be able to experience for yourself how intense Africa can be.

See Luangwa from a microlight

A very special way to see Luangwa is from the sky. You can do this in a microlight; a small and very agile plane. They are open, which gives you an impression of what it might be like to be a bird. You can take a morning flight from Tafika Camp, for example, to see how the animals wake while the sun rises. It’s really a sensation you have to experience to believe.

Spend the night in lodges or tented camps

South Luangwa only has a few lodges and tent camps. That’s why many tourists stay the lodges or hotels just outside the park, which is usually cheaper. But if you’re staying in the park itself, you can head out earlier and get to places where others can’t go. And you’ll experience the animals that roam, crawl and fly around your hut or tent. It’ll give you the true experience of what this park has to offer. So make sure you explore options to stay inside the park, it’s really worth the extra money.

It might sound unusual, but you can go on safari on a mountain bike. You’ll take a leisurely ride past the animals, who are not fussed by your presence. The advantage over a walking safari is that you can cover greater distances on a bike. Just like with most safaris, there is an armed ranger with you.

You can imagine what those first explorers would have felt like on their first journeys exploring this land. A trip here is still a journey of discovery, where animals like elephants, buffalo, giraffes, lions and countless kinds of antelope cross your path. But you can also find rarer animals such as the African wild dog. There is some development at South Luangwa, but much less than some other safari areas in Africa.

South Luangwa is in the east of Zambia, in the southern-most tip of the famous Rift Valley, right where the Muchinga river and the valley of the Luangwa river meet. This river is a source of life in the dry season, while it floods the plains when the rain hits. South Luangwa has a rugged landscape with savannahs, open plains and rivers. There are only two seasons here: the dry and the wet.

Luangwa is especially famous for its walking safaris. The first one was held in 1954, organised by Norman Carr, one of South Luangwa’s first rangers. This was when Africa was still largely an unexplored mystery and ‘very dangerous’. Walking safaris are still on offer here, but also the more traditional safaris in a four-wheel drive. More kinds of safaris have popped up since then, such as safari in a microlight: a small, open airplane. Or on a mountain bike.

July to September is peak season. The rain has ended and the park comes to life. The trees and plants are blooming and many animals are looking for a mate or having their young. Please be advised that outside of peak season, many lodges and bush camps are closed.

The vegetation is very green and leafy, which can make it tricky to spot the animals.

Animals are starting to gather around the watering holes or rivers, so you can see many different animals in one place. The landscape is now dry and losing colour.

If you like a challenge, you can visit the park in November or December. There are lots of thunderstorms which can be really exciting and impressive after the long dry season. The rivers fill up, and roads can become too muddy to drive on. There are lots of flowers to see, and the animals have plenty to eat.

The wettest months, and the most challenging time to visit the park. But you'll be alone in the bush.

It’s worth visiting the park in these months. There is still some rain, but you can see that the landscape has completely recovered from the dry season. There are barely any tourists, though this is never really a problem here anyway.

Lodges and camps are regularly visited by animals, such as elephants, impalas and warthogs. And at night, hippos come out of the water to graze. It can be extremely dangerous if you accidentally come between a mother hippo and her young. So always be very cautious and keep your eyes open.

In peak season the lodges and camps get booked out quickly, so make sure you book well in advance. The prices for accommodation in lodges in South Luangwa often include meals and different safaris.

Walking safaris and bike safaris are not without danger. Though the rangers know the animals’ behaviour very well, wildlife can always be unpredictable. So make sure you follow the instructions of your guide very closely.

Devil’s Pool
Devil's Pool is a unique natural swimming pool, right on the edge of the Victoria Falls. At the very spot where the water falls over the edge, there's a shallow pool with minimal current. Do you dare to take a dip?
Read more
Fly over Vic Falls in a microlight

Fly over Vic Falls in a microlight

Fly over Vic Falls in a microlight
Fly in a small, open aircraft microlight (microlight) to see Victoria Falls. You can feel the wind in your hair, and even the spray from the waterfalls.This tour is one of the best you can do.
Read more
See the Victoria Falls from a helicopter

See the Victoria Falls from a helicopter

Victoria Falls
The Victoria Falls are some of the most beautiful waterfalls in the world. They are the widest in Africa: around 1.708 metres wide, and 100 metres high. It's one of the new wonders of the world.
Read more
Watch elephants walk through Mfuwe Lodge

Watch elephants walk through Mfuwe Lodge
A herd of elephants marches through the lobby of Mfuwe Lodge every year. This accommodation is in the middle of the famous South Luangwa National Park. You can witness it.
Read more

all 9 articles on Zambia