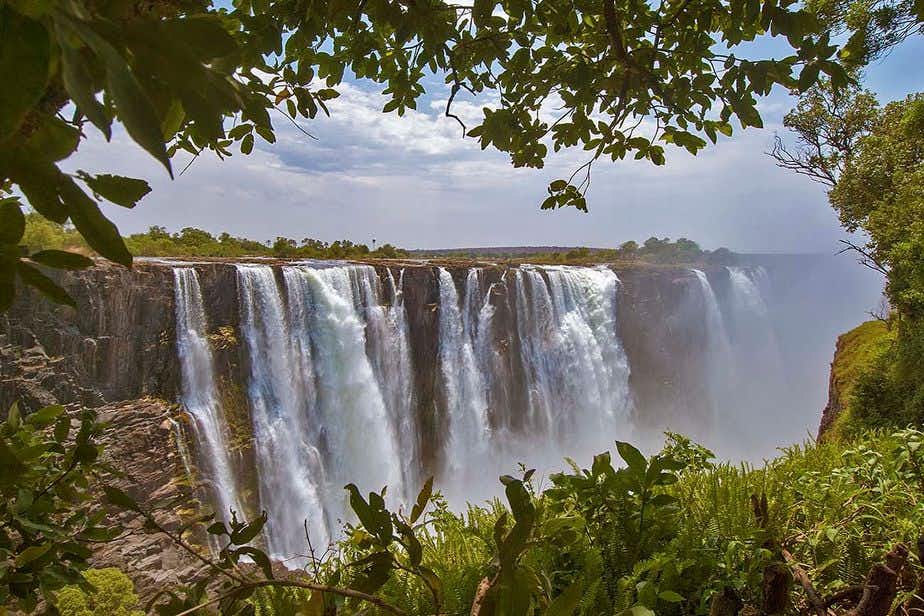 The Victoria Falls are some of the most beautiful waterfalls in the world. They are the widest in Africa:  around 1.708 metres wide, and 100 metres high. It's one of the new wonders of the world.

The Victoria waterfalls are often shortened to Vic Falls. This huge waterfall is located on the border between Zambia and Zimbabwe. This is where the water of the famous Zambezi river thunders down a cliff with huge force. They are one of the largest waterfalls in the world, and if the river gets high, it can be the biggest waterfall in the world. The falls are surrounded by a great natural area full of animals. You can take an elephant safari here, which is unusual in Africa. If you’d like to check out the waterfall’s height for yourself, you can take a bungee jump right over it…

The falls are very impressive. There is an immense amount of water crashing over the edge, an ever-flowing curtain of water. The falls are 60 metres high in some parts, but up to 108 metres in other parts, and they’re 1.708 metres wide. You can hear the falls roar hundreds of metres away. Clouds of spray from the falls create several rainbows when the sun shines, and you can see those clouds from up to 20 kilometres away in the wet season. There are some places where you can get so close to the falls that it feels like it’s raining. This is the might of the famous Zambezi river, one of the largest rivers in Africa.

This waterfall also goes by the name Leaping Water, and it’s only 27 metres wide and 60 metres high. It was created when there was a crack in the rocks underneath it, and scientists believe it will eventually become much bigger. You can really learn a lot about how a waterfall is created here. The name comes from the little islands in at the top of the falls where the locals used to perform sacrificial ceremonies and the European missionaries thought it was devilish. You can only see these falls from the Zimbabwean side.

The name speaks for itself, these are the biggest and most important falls here. If you look closely you might see that these falls are split in two by large rocks at the top of the falls. To the left of these rocks the falls are 524 metres wide, and to the right they are 297 metres wide. These falls are 83 metres high.

This part of the falls in 550 metres wide and 108 metres high, making it the highest of the Victoria Falls. When it’s sunny you will see at least one rainbow, but you can see three if you’re lucky. Hence the name.

This name is also quite self-explanatory, as it’s shaped like a horseshoe, and it’s 90 metres high. These falls dry out around October and November, and you’ll be able to see the effects of its erosion on the basalt below very well.

These falls are 304 metres wide and 101 metres high. You can see how the river runs to the edge of the cliff and then plunges down. This waterfall is the main attraction on the Zambian side, but you can see it pretty well from the Zimbabwean side as well.

This spot on the Zimbabwean side offers you an unique experience of seeing a large part of the waterfall from below. It’s like you’re face-to-face with a wall of water. You do have to descend 73 steps into the canyon. This is also the location of a statue of the explorer David Livingston, on the left. He was the first westerner to bring the falls to the public eye.

The Boiling Pot is the churning water in a deep fissure within the Zambezi river. At the bottom of the falls, the water is very wild and it’s a perfect place to go rafting. There is a walking track that leads here from the Zambian side, and you can get very close to the water and the surrounding cliffs. You will see some of the falls in the background.

The town of Livingstone is the current main spot where tours and activities start and are booked. They include bungee jumping, rafting, elephant safaris or a relaxed cruise on the Zambezi river. There are many options for accommodation here, and the most luxurious ones have direct access to the falls. There is a small market where you can buy local handcrafted artefacts.

There is also a town called Victoria Falls, and it’s one the Zimbabwean side. It used to be the main hub for tourists, but has gotten quieter over the last years. You can still book all sorts of activities here, and there are several hotels. One of those is the prestigious Victoria Falls hotel, where the British monarch stayed when she came to view the falls. There is also a market here, similar to the one in Livingstone.

Rafting on the wild Zambezi river

Raft on the wild Zambezi river
Enthusiasts say it’s one of the best places to go rafting. The Batoka Rapids, at the bottom of the falls, are said to be some the best in the world. The rapids range from class two to several class-five ones. The last ones come with a 50% chance of capsizing. You can raft for half a day, but the real challenge is the full-day experience.

Canoe amongst the animals

At the top of the waterfall, both riverbanks are nature reserves. The water is very calm here, and offer a unique vantage point to see the wildlife. You can paddle past elephants and hippos (if you’re lucky), but it’s worth it just for the landscape. It’s an exciting feeling that if you were to keep paddling, you’d end up at the waterfalls.

Safari in the National Parks

Especially the Mosi-oa-Tunya National Park is worth a visit. It’s home to many animals including white rhinos, elephants, giraffes and buffalo. You’ll regularly see the Zambezi river in the background, which not only brings life to the abundant vegetation here, but also offers drinking water to the wildlife. The best way to see the parks is taking a safari jeep.

One of the waterfalls in Victoria Falls. ©Corno van den Berg

Largest Waterfalls in the World

With these sorts of attractions you’ll often hear many superlatives: the largest, the widest, etc. And if you compare the Vic Falls to the Niagara Falls between the US and Canada and you’d understand why. There may be wider waterfalls in the world depending on the amount of water in the river, but the width of the three waterfalls of the Niagara Falls don’t even amount to a kilometre, where the Vic Falls is more than 1,5 kilometre wide, excluding its little islands.

The only real record for the Niagara Falls is for their consistency, not so much for their volume, as the Iguazu and the Vic Falls both fluctuate quite severely. The highest waterfalls in the world are the Angel Falls in Venezuela, it’s only a few metres wide, but it’s 979 metres high!

The landscape around the Victoria Falls is very special. Just like many other parts of the area, the ground consists of basalt, which is flat and even almost everywhere, except the falls. That’s where it’s sandstone, and it has been eroded over the years. The water is so powerful that it’s now also eroding the basalt, and the surface below the falls is slowly changing. But it won’t change the size of the waterfall anytime soon.

The river at the top of the waterfall offers options for relaxed water sports such as canoeing and river cruises. At the bottom the water is wild and rough, so white water rafting is offered here, and so is extreme kayaking. Altogether, there are many ways to enjoy this river.

Best time for the Victoria Falls

You can visit the falls anytime, but, and this is a bit BUT, the water volume really varies per season.

Obviously the best time to go is during the wet season, as the falls will be large. This is from March to May. The river will be wide and full, and the falls impressive. But it will also be extremely misty due to the spray, making it hard to actually see the falls.

In the dry season, from August to November, the falls are ‘minimal’ with mostly separate streams that tumble down the cliffs.

But you should visit the Vic Falls, no matter which time of year you’re there. Especially from the Zimbabwean side, because they are very impressive, even during the dry season.

Inflation is extreme in Zimbabwe. Money exchange operators here are known to fill out the wads of currency you will get for your dollars or euros with plain bits of paper. Make sure you go well prepared, because there aren’t as many tourists on the Zimbabwean side, so the locals often try and talk to you or sell you things. If you’re only visiting for a day it’s not too bad, you can easily take a walk to the falls.