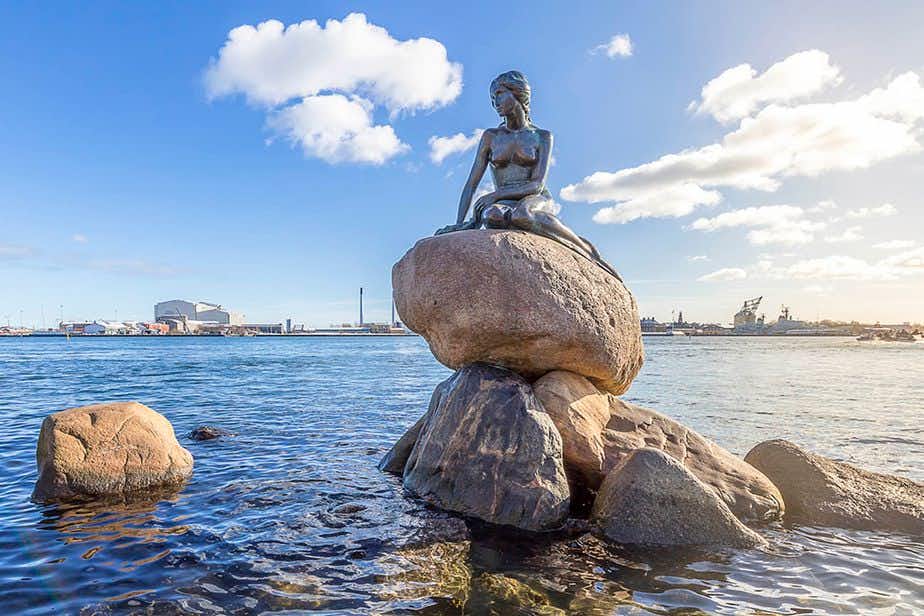 The Little Mermaid is the symbol of the city of Copenhagen. The statue is actually a statuette as it is only 1.25 meters tall. It represents the main character from Hans Christian Andersen's fairy tale of the same name, which dates from 1836.

The statue was created in 1913 by Edward Eriksen. That same year the statue was placed on the rocks where it still stands today. The client was Carl Jacobsen, the son of the founder of the Carlsberg brewery. Remarkably, the statue has two legs, but also two tails. It is one of the most famous attractions of Denmark.

The fairy tale of The Little Mermaid

The mermaid is finally allowed to swim to the surface on her 15th birthday. She sees a prince on a ship there. She falls in love instantly. A storm is approaching, and the prince gets into trouble. She manages to save him and takes him to a beach. After which she disappears again. But she longs for him and having a soul. But for that she must marry the prince. She goes to a sea witch who gives her a magic potion. But she does lose her voice.

When the prince goes into the country to find a wife for his wedding, the mermaid threatens to turn into the foam of the sea. The only solution is to kill the prince, but she doesn't want that. it throws itself into the sea and turns into the foam that you sometimes see in the waves. But she does not die. According to Andersen, she becomes a daughter of the sky and is invisible to humans. If she does good deeds for 300 years, she will still get a soul. And may she enter the kingdom of heaven.

Location of the The Little Mermaid

You can find the bronze statue on the Langelinie promenade in Copenhagen. It is located near the centre of the city and is therefore easy to reach on foot.

Dog Sledding Tour
It’s one of the best ways to discover Greenland: dog sledding. You can get in on the action; steering, but mostly braking, because the dogs literally take off when you give them the commando to go.
Read more
Ilulissat Icefjord in Disko Bay

Restaurant Noma
Noma in Copenhagen is considered by many to be the best restaurant in the world. Chef René Redzepi has won several awards, including the prize for best cuisine four times. Until he announced that he would stop and the restaurant closed in 2017. Now Noma is back; in a different location in the city but with the same quality.
Read more
See the Northern Lights in Greenland

See the Northern Lights in Greenland

See the Northern Lights in Greenland
Greenland is one of the best places to view the Northern Lights. The southern part of the island is perfectly positioned in the ‘northern light halo’, and there is very little light pollution.
Read more
Watch polar bears on Greenland

Watch polar bears on Greenland
Hundreds of polar bears live on Greenland. They usually stay away from villages. But you can certainly encounter them when you go out on a tour, by boat, helicopter, and on foot.
Read more
Whale watching around Greenland

all 9 articles on Denmark