One of the best places to see different kinds of whales 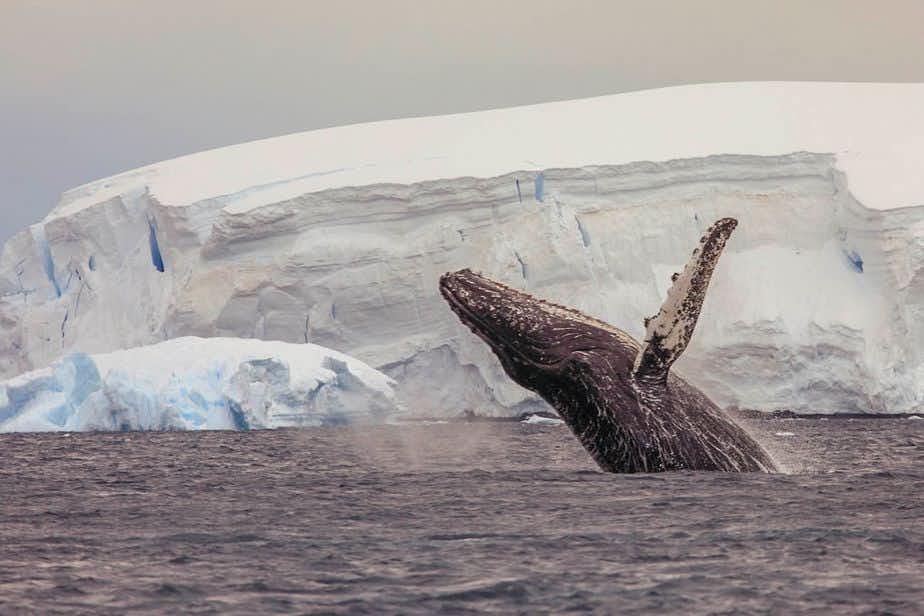 Whale watching on Greenland is easy. The waters surrounding the immense island are extremely rich in food. As a result, various types of whales travel to the waters. And you can go on an excursion to watch the whales. Where you can see known, but also less known species of whales.

If you go to Greenland, you will probably take a boat excursion. And then you can encounter whales. Which usually happens. Countless species live in the waters around Greenland all year round. So take a good look around you.

There are up to 20 different kinds of whale to be spotted around the rich coastal waters of Greenland, including the largest animal on the planet: the blue whale (can reach up to 30 metres). Just as special (and rare) is the bowhead whale.

Other whales that are regularly seen are the humpbacks and sperm whale. More interesting creatures are the narwhal with its two-metre-long ‘tusk’, belugas (white whales), Long-finned pilot whales and bottlenose dolphins.

A whale spotted in the waters near Greenland. ©VisitGreenland

This large whale can grow up to 20 meters in length, making it the only large whale in Arctic waters. They can also be recognised by their black colour, strikingly large head and the absence of the dorsal fin. The animal has two blow holes on the head.

Also noteworthy are the long ribs. The bowhead whale has the longest of all baleen whales. In total, an adult animal has 350 bales on each side of the jaw. These can be over 4 meters long. With these ribs they filter small animals, but also plankton from the water.

The blue whale is the largest mammal in the world. Adults can grow up to 33 meters in length and weigh 170,000 pounds. It can be recognised by its length, but especially by its remarkably small dorsal fin. And its fountain that can be nearly ten meters high. The polar regions are an important area for them to eat.

The menu includes krill, or tiny sea creatures. This animal was one of the main prey for the whalers in the 20th century, causing their numbers to dwindle sharply. Thousands of animals are now swimming in the seas all over the world. You must be lucky to see this impressive animal in the waters around Greenland.

The humpback whale is found in all oceans. And so, with a bit of luck, it can be seen here all year round. These animals are easily recognisable by the hump on their back when they dive under water. Its stocky build and dark color are also striking. The humpback whale can grow to fifteen meters.

Their menu consists of krill and fish. Sometimes they hunt in groups, confusing fish with hundreds of air bubbles. These animals are seen fairly often from the boat in eastern Greenland.

The sperm whale is one of the largest animals in the world at 18 meters. Sperm whales are easily recognisable by their immense nose, which makes these animals look a bit like a submarine. The sperm whale is found in all oceans.

Scientists recently discovered that it feeds on giant squid, among other things, which it chases to a depth of 3,000 meters. The sperm whale is a frequent guest in the waters of Greenland.

The fin whale is, after the blue whale, the largest animal in the world. A fin whale can grow up to 27 meters long. A characteristic of this whale is that the caudal fin usually does not come out of the water when it is swimming. Which is the case with most whale species.

This animal mainly eats fish and squid. But they also feed on plankton, the nutrient-rich little creatures in the arctic sea. Fin whales are also regularly seen in the waters around Greenland.

The minke whale is one of the smaller whales. This animal does not grow taller than 7.5 meters. For a long time it was thought of as a species, but DNA research reveals that there is a northern and a southern kind. They are quite curious and regularly come to the boat to have a look.

The killer whale is not actually a whale, but the largest dolphin in the world. These animals are easily recognised by their black back and white belly. The males can grow to almost ten meters, the females slightly smaller. Orcas in the world all belong to the same species, although there are several subspecies. But not all scientists agree on this.

They are opportunists and eat almost anything, although their menu depends very much on where they occur. Scientists have seen them attack fish, squid, sea birds, seals (even on the beach), sea lions, as well as other whales and sharks. Several large orca families live around Greenland, which occasionally show themselves near the coast.

You can go whale watching all year round. But the best period is May till November. In these months the weather is best and you'll the most daylight.

Dog Sledding Tour
It’s one of the best ways to discover Greenland: dog sledding. You can get in on the action; steering, but mostly braking, because the dogs literally take off when you give them the commando to go.
Read more
Ilulissat Icefjord in Disko Bay

See the Northern Lights in Greenland

See the Northern Lights in Greenland
Greenland is one of the best places to view the Northern Lights. The southern part of the island is perfectly positioned in the ‘northern light halo’, and there is very little light pollution.
Read more
Watch polar bears on Greenland

Watch polar bears on Greenland
Hundreds of polar bears live on Greenland. They usually stay away from villages. But you can certainly encounter them when you go out on a tour, by boat, helicopter, and on foot.
Read more
Show all articles