A rugged archipelago with ice as its permanent resident 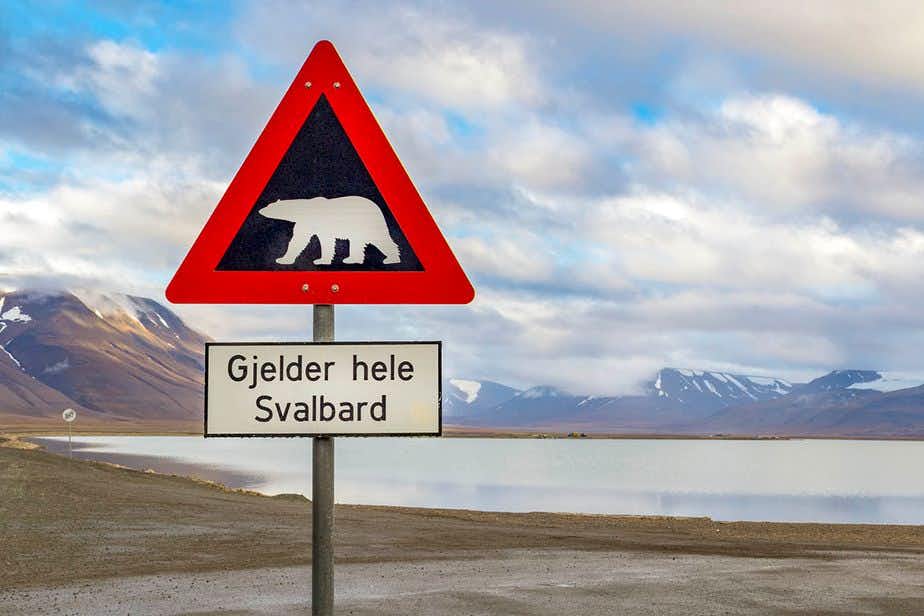 Svalbard is an area full of glaciers, mountains and icy coastlines. It’s is the best place in Europe to see polar bears, as well as walrus, whales and numerous birds. This archipelago is in the Arctic Ocean, around 500 kilometres north of Norway. It's an inhospitable place, with an impressive decor.

The rugged landscape of Svalbard.

The islands are a good example of how an arctic area develops. During the last ice age, the land was covered by ice, but as the harsh climate changes, life returns. The process is still continuing as the seabed is still being pushed upwards. The old coastlines are silent witnesses of this age-old process. Some of these coast lines have shifted far inland and have reached a height of 130 metre above sea level.

Longyearbyen is the capital of Svalbard.

Longyearbyen is the capital of Spitsbergen, and the perfect base for most excursions. But probably also the first place you come. So you can acclimatise here and already enjoy the landscape around this town. Longyearbyen has shops, restaurants and bars, but also many coloured houses that stand out in the landscape.

Barentsburg is a Russian enclave, with a real Russian atmosphere. There’s a square with a proud statue of Lenin, and a pub with home-brewed beer. Take a walk around this unique town on the island of Svalbard.

You can see icebergs everywhere around Svalbard, but the Raudfjord in the north is famous for its abundance of floating icebergs. As the boat carefully navigates the icebergs, you can see the light reflecting of the masses of ice in many different colours. Take lots of photos. Even after you’ve arrived home you’ll be amazed by the many colours.

It’s vastly different from Amsterdam, the Dutch capital, and it can be a confronting place to visit as most visiting tourists are animal lovers. But the former whaling station Smeerenburg on the island does shed light on its Dutch history . The ruins are slowly eroding in the open air, but there are still plenty in a good condition. The boiling pots are still there, as are the whale bones to remind you of its dark past. The timber on the coastline is driftwood from Russia.

The island of Ytre Norskøya is in the north-west of Svalbard. The Dutch whalers from Zeeland used its 141-metre high mound as a lookout to spot whales, which is where the name comes from: Zeeuwse means from Zeeland, and uitkijk is Dutch for lookout. As soon as they spotted a whale, they would head off to sea. The lookout is now a perfect place to take in the vast vistas of the ocean, and the island still has some remains of a whaling station.

Diving in a forest of kelp off Spitsbergen, Svalbard.

Svalbard offers divers a unique experience. You can take a dive here wearing a special suit. You have to be a very experienced diver and be familiar with the so-called ‘dry suit’. In the icy, but crystal-clear water you can see arctic kelp and the sparkle of floating ice. You can also spot sea butterflies and sea urchins, and perhaps a seal or a white dolphin. There are different companies offering diving experiences.

It’s really a must-do if you visit Svalbard. This museum shows the islands’ rich history and natural wealth. Visit it soon after you’ve arrived, so you’re well informed when you travel around: you’ll enjoy the landscape, animals and people even more. There are plenty of artefacts from the whaling times on display here.

A tour on a snow scooter on Svalbard.

The best way to get around Svalbard in winter is by snow scooter. Also because there really aren’t very many roads. You can take great tours through unspoiled nature here, across frozen fjords and snowy mountains. You can spend the night in a trappers hut if you take choose a tour of multiple days. You can only head out on snow scooters with an experienced guide carrying a weapon, because you don’t know what they might encounter along the way.

To get a good overview of the landscape, the best thing to do is climb up. And one of the best places to climb to is Plateau Mountain, near Longyearbyen. It’s almost 500 metres high and offers a great view of the Longyear glacier, Adventdalen (a 30-km-long valley) and the Isfjord. In summer (June and July) there are auks (small birds similar to penguins) who breed under the overhanging cliffs. It’s a tricky climb and can only be undertaken with an armed guide.

It’s a special feeling to know there’s just a huge amount of ice under your feet. Wearing crampons on your feet, metal devices that give good traction on ice, you can mount the large mass of ice. It will give you a great impression of how huge the amount of ice in a glacier really is. Keep an eye out near the moraines of the glacier, there may be fossils in there.

It was given the name Spitsbergen by the Dutch explorer Willem Barentsz. On his third journey to discover a northern route to Asia in 1596, he discovered this ‘new land’, as he described it. Along the west coast you can spot two prominent mountains, the Monacofjellet (1.084 metre) and Tyskertoppen (1.012), which are located east of the Widjefjords. These steep mountains inspired Barentsz to name the area Spitsbergen, being Dutch for pointy mountains. The archipelago is now known as Svalbard, and Spitsbergen is its largest island.

Barentsz thought the islands were part of Greenland. And he never did find a route to Asia. He did discover Nova Zembla, and the whalers were not far behind him. After the coastline was mapped, there was a battle for land, but the water around it was actually more valuable, as Barentsz had seen many whales on his journeys.

The Dutch were the first to settle on a small island in Svalbard, and named it Amsterdam. They also built a small village on its coast and call it Smeerenburg, smeer being the Dutch word for an oily substance. In 1617 more Dutch people follow and settled on the island of Ytre Norskøya, which is further north.

From both these locations they hunted for whales using harpoons. They removed the blubber and boiled it, and the whale oil was then shipped back to the Netherlands to be processed into soap and fuel for lamps. The whalebone was used for making corsets, skirts and umbrellas.

In the 1970s and 1980s Dutch archaeologists undertook research near the town of Smeerenburg, and the remains of timber houses, warehouses, whaling station and a little church are still there. There’s also a small cemetery with the graves of sailors and workers. It’s believed the manufacture of whale oil ceased here in 1660.

After whaling, the area became subject to mining. There was plenty of coal in the early 20th century and the area around Cape Boheman was mined. Mining was Svalbard’s main industry for quite some time, but the mining has practically stopped here now.

It’s tourism that’s the main industry now. That’s because the islands really speak to the imagination, despite their remote location and inhospitable climate thanks to the arctic chill from the north. In winter it’s dark 24 hours a day, and in summer the sun doesn’t even set. More than half of the islands are covered by eternal snow. Humans are mere visitors here, as the climate rules the lands. You have to be prepared to brave the elements if you truly want to experience Spitsbergen.

Both winter and summer are good times to visit. But the winter is extremely cold and not for the faint-hearted. Temperatures will not rise above zero degrees Celsius, and between late November to late January it’s dark 24 hours a day.

In summer the temperatures are only between 0° tot 5°, but when the sun is out it’s very pleasant. In June and July the sun doesn’t set, so you’ll have lots of daylight to undertake activities. Though you’ll still have to sleep eventually!

The permafrost thaws on a daily basis in summer, so the soil is very soggy. Don’t forget to take gumboots, as you also might have to wade through a stream when you go hiking.

And always be prepared for a sudden change in weather. Storm, showers (or even snow) can quite literally drop out of the blue…

Don’t go wandering about without an armed guide. There are polar bears in the area, and they are not afraid of humans.

Hike to the Briksdal Glacier

Hike to the Briksdal Glacier
The Briksdal Glacier is one of the few glaciers in the Norwegian fjords that is relatively easy to access. The glacier and surroundings show well the beauty of this area in Norway.
Read more
Kjeragfossen

Kjeragfossen
Kjeragfossen is a large waterfall in the mighty Norwegian fjords. This waterfall is no less than 715 meters high. And yes, he is less known than the nearby Kjerag and Kjeragbolten.
Read more
Ride the Flåm Railway

Ride the Flåm Railway
The train to Flåm is one of the most beautiful train journeys on earth. This branch of the famous connection from Bergen to Oslo starts at the mountain station of Myrdal. From there it descends to Flåm in the Aurlandfjord through the Norwegian fjords.
Read more
Svalbard Cruise

Svalbard Cruise
A cruise around Svalbard is the best way to enjoy the islands. Much of this area is rugged and often virtually inaccessible. A ship is the best means of transport if you want to see the islands and it amazing wildlife.
Read more
Wooden stave churches

all 17 articles on Norway