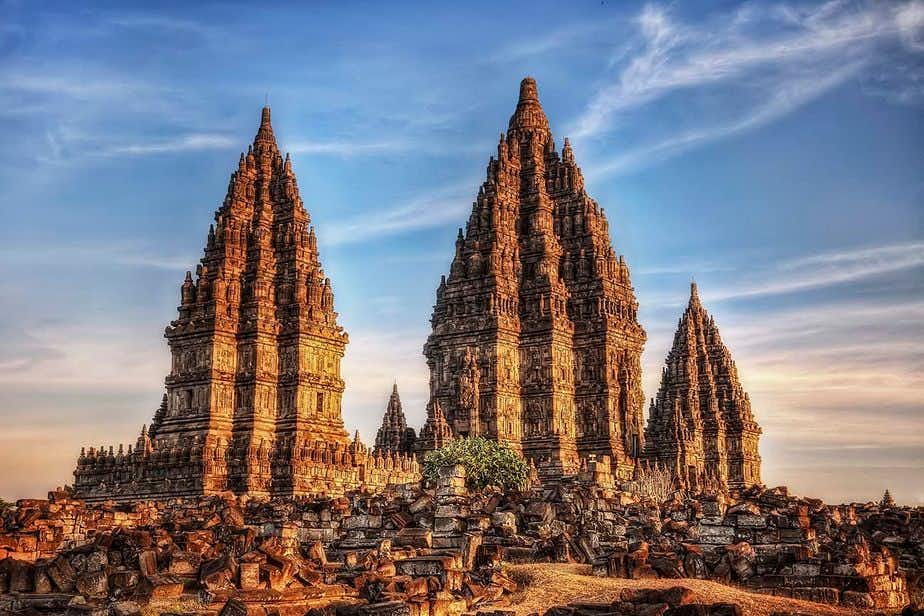 Prambanan in Indonesia is a complex with hundreds of temples, both large and small, that are built in a layered manner. You can easily visit the many temples.

The Prambanan temple complex is near the Buddhist temple of Borobudur, and both these complexes have a remarkably similar history. These two temples have a lot in common, their structure as well as their rediscovery. They were built around the same time, and then abandoned, potentially due to a volcanic eruption.

The 224 Temples of Prambanan

Around the central square there are ruins of more than 200 small temples, only a few of these have been restored. The reliefs at Prambanan are world famous: in the Tree of Life relief there are depictions of many animals: deer, rams, peacocks and monkeys.

A bit further along is the Ramayana epic: it tells of how Rama’s wife Sita was abducted and then rescued by Hanuman, the monkey king, and his monkey army.

Watch the Ramayana by full moon

Every full moon there is a special dance performance. This ancient love story has been re-enacted here for centuries. The legend of Sita’s abduction is depicted on the reliefs on the temple. There is no spoken word in the performance, only dance and elaborate costumes.

When the moon is full this is quite a sight to behold, on other days they use lamps to help light the stage. The show is only performed near the main temple in the dry season, in the wet season it is performed in a hall in Yogyakarta. You can opt to have dinner with the show as well.

One of the sculptures at Prambanan. ©Corno van den Berg

Most of the time there are restorations happening at the temples of Prambaban. It shows how these huge projects bring ancient object back to life, stone by stone. It’s an interesting process to witness, especially when you can ask the archaeologists questions about their job. They regard the project with both scientific and religious interests, which can be tricky for them.

Prambanan’s history is quite similar to that of Borobudur, though these temples weren’t discovered until 1893. When they started excavating, they discovered the central square.

Soon after they started the first reconstructions, though this was no easy process. This was because the archaeologists couldn’t find the original stones, probably because many of them were taken or repurposed in houses and roads.

They reconstruction of the main buildings wasn’t completed until 1953, but there are still foundations of buildings that archaeologists have no idea what they looked like.

An earthquake in 2006 caused severe damaged to the Prambanan temples, so parts of it have been closed to the public. They are working on restoring these parts using pictures from before the earthquake. During these restorations, they are also trying to reinforce the current structure to prevent further damage.

Prambanan is slowly gaining popularity with tourists. And so it also gets busier here. I was here early in the morning. This has several advantages. Firstly, it is still quiet with tourists. Second, it is not that warm yet. Finally, you can then take much better photos.

You can easily visit the temples yourself. But this can also be done with a guide. Which gives you a lot of explanation about everything you see. I did it with a guide and got a good idea of Prambanan.

Bali
Bali is famous for being a tropical island with sun, sea and beaches. The island in Indonesia has a great climate, and a rich Balinese culture with festivals, temples, tradition and delectable food.
Read more
Borobudur

Borobudur
Borobudur is the largest Buddhist temple in the world. It's located close to Merapi, the most active volcano in Indonesia.
Read more
Bunaken National Park

Mount Bromo
Mount Bromo on the island of Java is by far the most famous of the volcanoes in Indonesia. It’s 2.392 metres high, so it’s not the highest, but it is the most beautiful. And you climb it.
Read more
Snorkelling and diving on Bali

Snorkelling and diving on Bali

Snorkelling and diving on Bali
The water around Bali is known for great diving and snorkel spots. Where you can see tons of different animals, such as rays, sea turtles and sharks.
Read more
Ujung Kulon National Park

all 8 articles on Indonesia