Most famous pyramids in the world, located in Egypt, just outside of Cairo 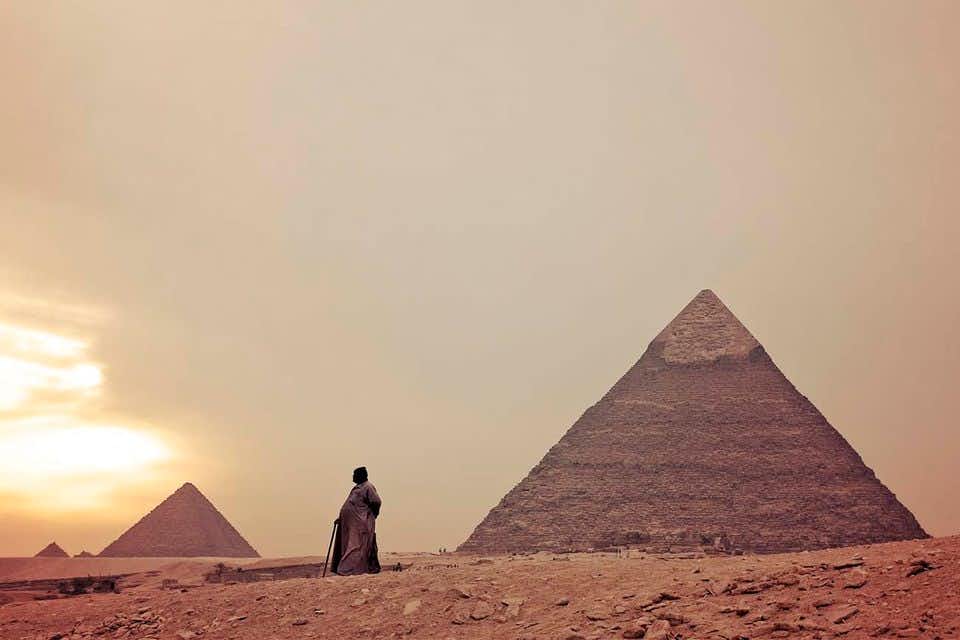 The Great Pyramid, the Pyramid of Khafre and the Pyramid of Menkaure are the most important remaining structures of ancient Egypt. And of course there's the world-famous Sphinx. It's an amazing place to visit.

For centuries, the Pyramids of Giza in Egypt were standing desolate, far away in the desert. But the city of Cairo has been growing, and is now only dozens of metres away from these monuments. The Pyramids of Giza are a symbol of the humans’ desire to unravel the mysteries of the ancient Egyptian civilisation. And these days, they also show how modern life is catching up to these ancient symbols. These are the best attractions of the Pyramids of Giza.

This pyramid is the largest in the world, built for Cheops (or Khufu), one of the first pharaohs. Scientists have calculated that the Great Pyramid probably dates back to 2500 BC. It’s built out of approximately 2.300.000 limestone blocks, each weighing between 2000 and 3000 kilos. When Napoleon, believed to be the first white man to see it, first saw it, he said there were enough blocks to surround the entirety of France.

The Great Pyramid of Cheops from the inside.

This is the only pyramid in which you can visit the upper as well as the lower chambers. The number of visitors allowed is strictly regulated. It is believed there is a temple located under the remains of buildings near the pyramid.

In 1954, archaeologist Kamal el-Mallakh discovered a ship in a pit covered by sand near the Great Pyramid. It’s dated to be from 2500 BC, and almost certainly belonged to the pharaoh Cheops. It’s not clear whether it was used for actual transport, or solely as a ship to use in his afterlife.

Out of the three largest pyramids, this is the smallest, it only takes up about a third of the space the other two do. Menkaure is a relatively unknown pharaoh, and scientists don’t agree on the reason why his tomb is smaller. Some say that the rocky plateau the pyramids are built on simply was not large enough, others think that in his time pharaohs were not as revered as before, so he didn’t receive the same grand structure, nor the manpower to build one.

Alongside Menkaure’s pyramid, there are three smaller pyramids, known as the queen’s pyramids. They were never completed, though we don’t know why. Another thing that’s special about these is that they have stairs, just like the pyramids in nearby Saqqara.

After the completion of the pyramid of Cheops, his son Khafre had the second pyramid built. It looks bigger than the first because it was built in a higher location. Remarkable are the casing stones covering the tip of the pyramid, which were polished smooth once upon a time, and can still be seen now. Scientists believe when the pyramids of Giza were built, they were all polished smooth to create perfect prisms. You can visit this pyramid, and there is no restriction on visitor numbers.

The Sphinx at the Pyramids of Giza.

The name literally means Father of Dread, and is also known as The Terrifying One. It’s not entirely clear why it was given this name. The world famous Sphinx is located near the pyramid of Khafre, and is connected to the pyramid by a long corridor. The structure is 60 meters long and was hidden under the sand. Archaeologists are still in disagreement about the role of this figure, whose head is human but body is that of a lion. He has a jewel on his chin, not a beard, which is a popular belief. One theory suggests it symbolised the Sun God, while others think it represents Khafre himself.

Sunset over the pyramids

You can’t visit the pyramids without watching the sunset over the iconic structures. Take your time and head off the beaten track. For example, walk into the desert to the right of the road. When the harsh daylight has mellowed out and a nice soft light takes its place, it offers an entirely different view.

It’s a particularly good time for taking photos. Eventually, you’ll be ushered on because there is a daily Sound & Light show there. You’ll notice that as the sun sets, the sky takes on a red tinge, this is because the smog particles from the city reflect the light and create that effect.

See Pyramids of Giza by moonlight

If you want to feel the real mystic atmosphere of the pyramids, you should visit them by moonlight. You’ll be supervised and won’t be able to access everything, but seeing the structures and stonework in the light of the moon is very special. The monuments are lit up, which adds to the atmosphere. Especially with the desert and the sound of camels and people in the background.

Slowly, Cairo’s satellite cities are creeping ever-closer to the Pyramids of Giza. Scientists even believe that each of the pyramids once had their own temple, most of which will now be buried under these towns. One of the only temple still visible is that of Cheops (Khufu) near the Great Pyramid of Giza.

The many treasures found here give a clear indication of a highly civilised culture, which formed around 3300 BC and disappeared around 332 BC. That’s when Alexander the Great conquered Egypt. Remarkable is that he left much of this culture intact, so parts of it have remained for centuries.

The huge blocks used to build the Great Pyramid were transported in an ingenious way, by around 20.000 people. It is estimated it took around 20 years to build the huge crypt. The pyramid is almost 230 meters wide and 147 metres high, making it the largest in the world.

It’s understandable that tourists and scientists alike are interested in these large structures. The complex includes much more than just the pyramids. Giza is also home to other tombs of less important people, and channels dug by hand so ships could moor here. Those were to ensure a king’s funerary proceedings would run smoothly.

There are two smaller pyramids near the Great Pyramid: that of the pharaohs Chephren (Khafre) and Menkaure. These are actually pyramid complexes in their own right, just on a smaller scale. Each building served an important purpose, though it’s still not clear exactly which.

Nile River Cruise
A cruise along the Nile river is the most popular way to see this part of Egypt. There are many options available, with three- and four day cruise the most popular.
Read more
Valley of the Kings