Valley of the Kings in Egypt: 10 Highlights - AmazingPlaces.com

Famous Valley where Tutankhamun was buried, amongst others 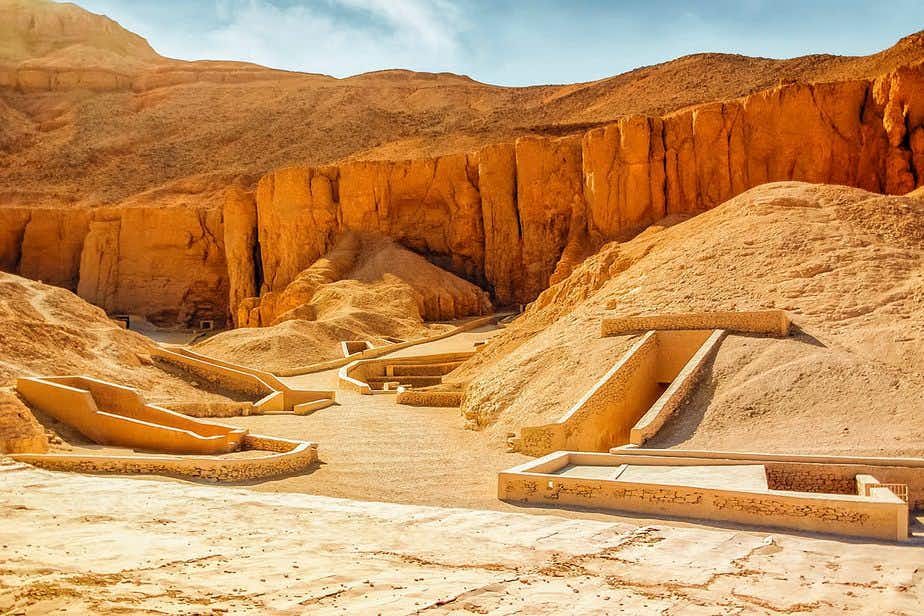 The Valley of the Kings in Egypt is the burial ground for many pharaohs from the New Kingdom, including Tutankhamun, Amenhotep I, II and III, Thutmose I, II, III and IV and Hatshepsut. It is near the historical city of Thebe, which is now known as Luxor.

The Valley of the Kings is one of the most important monuments in the world. It’s the burial ground of the pharaohs of the New Kingdom. It has Tutankhamun’s tomb, who was the most famous pharaoh ever. His tomb was uncovered in 1922.

And even though most of his treasures are no longer there (many of them are on display at the Egyptian Museum in Cairo), it’s still really worth visiting his tomb. His sarcophagus is still there (made of red Quartzite), and there is another sarcophagus inside in the shape of his mummy. The walls are also richly decorated, including a depiction of Tutankhamun arriving in the underworld and meeting Osiris, the god of the afterlife.

But there’s much more to see. If you’ve seen the many artefacts in the Egyptian Museum that were found in this area, you can get an idea of what an untouched tomb must have looked like. It’s not hard to imagine what those discovering these tombs much have felt seeing all those treasures.

Wandering around the Valley of the Kings. ©Corno van den Berg

More than 65 tombs have been found in the valley, and they are numbered in order of discovery. Here are some of the highlights:

The Valley of the Kings is part of the realm of the dead, als named Duat (also or Akert, Amenthes, Amenti, and Neter-khertet). The location for it was chosen by the ancient Egyptians because this is where the sun ‘died’ every day, it’s where it set at night.

You can watch the sun set here, exactly like the Egyptians did, and see the valley coloured by the setting sun, a perfect photo opportunity. Make sure you’re up high so you can see the entire valley.

You will find the tomb of Tutankhamun in the Valley of the Kings. This is the most famous pharaoh ever. His grave was uncovered in 1922.

Even though most of the treasures are gone, a visit to the burial chamber is worthwhile. Because the sarcophagus of Tutankhamun (made of red quartzite) is still there. With another sarcophagus inside, but in the shape of a mummy.

There are countless rich decorations on the walls. It can be seen, among other things, that he presented himself to Osiris, the ruler of the realm of the dead. But much more.

The beautiful walls in the Valley of the Kings.

Visiting the Valley of the Kings

The Valley of the Kings is on the west bank of the Nile. You can visit the valley easy on a tour with a guide. It is also possible to go on your own. But it is hard to find all the attractions yourself.

Nile River Cruise
A cruise along the Nile river is the most popular way to see this part of Egypt. There are many options available, with three- and four day cruise the most popular.
Read more
Temple of Kom Ombo

Temple of Kom Ombo
The Temple of Kom Ombo is unusual, because unlike other temples, this ancient Egyptian temple is dedicated to two gods, the falcon god Horus and the crocodile god Sobek.
Read more
Valley of the Queens