Western Desert in Egypt: 10 Things To Do - Droomplekken.nl

A sculpture garden created by nature, out in the Egyptian desert 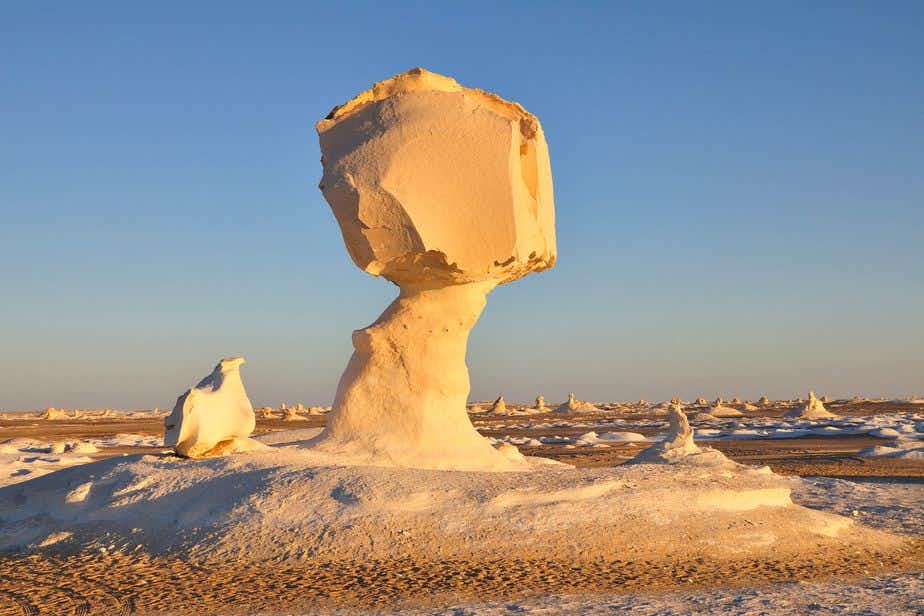 The Western Desert in Egypt was once upon a time an ocean. This has created some amazing white/yellow chalk formations, which can be found in the part of the desert called the White Desert. There is also an area called the Black Desert, where there are some amazing remains caused by ancient volcanic activity.

Welcome to the Sahara Desert. The Western Desert refers to a part of the eastern Sahara, just to confuse you all.  But it’s called that because it’s in the west of Egypt. There is a Black Desert and a White Desert here, as mother nature has crafted her skills here well and played with colours. The result is a remarkable landscape, with intriguing formations. You’ll also find remains of ancient Egypt, the Romans and early Christians here.

You might think of the Sahara as an endless backdrop of just sand. The desert covers two-thirds of the entirety of Egypt. But a desert knows a surprising number of variants. Of course, the Western Desert knows wandering dunes, which are blown all over the place by the wind. But you’ll also see hills, crystal mountains and rock formation that will have you rubbing your eyes in disbelief. These are not optical illusions, or a so-called Fata Morgana, they are real and remarkable, no matter how many times you rub your eyes.

The Western Desert is so much more than sand. Besides its White Desert and Black Desert, there is a lot more to discover here. The reason for its many interesting phenomena are the minerals in the ground. This vast, dry and bizarre world is a unique place to visit for us mere humans. There are oases here and there, green little patches where there is a source of water.

This part of the desert is 70 million years old. It takes up around 50 kilometres and is where the wind-sculpted rock formations can be found, which take on many shapes. Part of these were coral, once upon a time. Now they are pillars in the desolate landscape. In recent years it has become a very popular tourist destination. You can wander or drive around here for hours, marvelling at a landscape that could come straight out of a movie. The White Desert is about a half-hour drive from the Bahariya Oasis.

It’s an interesting sight: in the middle of the desert you’ll see black mountains, sand dunes topped with big rocks. Welkom to the Black Desert. You can take a walk around here, but the best thing to do is to climb one of the mountains and see how these rocks give the area a black tinge. If you look closely you’ll notice how the solidified lava has taken on strange shapes. This area is along the main road between Bahariya and Farafra.

The main road through the desert passes by another special attraction: The Crystal Mountain. It’s a hill that literally sparkles as you approach it, because it’s made out of quartz crystals. There are many different colours such as white, red, and most famously, purple.

This is where a layer of the earth’s crust that was full of crystals rose up to the surface. Even from a distance, you can see it sparkling. The mountain also contains obsidian, a volcanic black glass. The Crystal Mountain is located between the White Desert and the Black Desert.

Fossils in the Western Desert

The Western Desert has a remarkable history. This regio was once an immense inland sea. In various places, fossils in the soil are the hard evidence for this. If you look closely you will still find all kinds of shellfish here, but also fossil plants and coral. You are standing in a former ocean, which is a strange experience when you are surrounded by sand.

Camel ride through the Western Desert

As you would expect, you can roam around the sand on the back of a camel. They are known as the ‘ships of the desert’, and they’re one of the few creatures that really feel at home here. In many oases, especially at hotels, you can book camel rides. They can take anything from few hours to a few days.

You can head to Siwa, or into the White Desert. If you take a ride for several days, you will be able to feed them and help take care of them. And you’ll notice how quickly they’ll recognise you. These animals are a lot more social than most people think.

The waterfalls of Wadi el Rayan

Around 65 kilometres south-west of Faiyum is Wadi el Rayan. This nature reserve contains two lakes that are around 43 metres below sea level. There are also numerous waterfalls. Wadi el Rayan is one of the few remaining habitats or the endangered rhim gazelle. This animal is very well adapted to the extreme conditions in this oasis.

The Bedouins of the Western Desert. ©Corno van den Berg

Many drivers in the desert that take tourists around in their four-wheel drives are descendants of the nomads that used to live in the deserts hundreds of years ago. Ask them about their lives, and especially their traditions, which many still practise. Family honour is especially important to them.

They also really love the desert, which was only theirs for so many years, but these days they are happy to share it with tourists. Ask them about their miracle cure again thirst: they use pyrites and quartz crystals to stimulate their saliva production and reduce thirst.

After spending the day in the dusty desert it’s wonderful and refreshing to step into a hot water spring. Especially since it can get really cool in the desert at night. The water gets pumped from up to 600 metres deep, is full of minerals and ready to use. The temperatures can range from 35 to 50 degrees. The hot springs offer a very relaxing end to an adventurous and dusty day in the desert.

Birdwatching in the Faiyum Oasis

The Faiyum is around 100 kilometres south-west of Cairo. It is the largest oasis in Egypt and on the edge of Lake Qarun. The lake is popular with the inhabitants of the capital, but also with the many migrating birds that stop here on their way in autumn.

Imagine hundreds of black storks, spoonbills, cranes, pelicans and many others. This area, with the exception of the town of Faiyum, is relatively quiet and green. An area around the lake has been used for agriculture for centuries. They still produce fruit and vegetables in this area.

The Siwa Oasis in the Western Desert.

The oasis of Siwa has been famous for many years. Alexander the Great often consulted his oracle here, which scientist believe was the god Amun. Siwa still has something mystical about it. Until the eighties this area was nearly completely cut off from the rest of the world.

You can still see evidence of this in the village of Shali. These days there is a paved road coming from Mersa Matruh on the north coast. There are more than 300 sweet-water lakes in this oasis. Siwa is not on the main route between Cairo and Luxor, but near the border with Libya.

Temple of the Oracle of Amun

This temple is located in the Siwa Oasis, and was discovered and dug up in 1970. They also found many remains of ancient Egyptians. There is still a part of the temple intact, including an impressive gateway. This temple shouldn’t be confused with ‘the’ Temple of Amun, which is in Sudan.

El Bagawat, or simply Bagawat, is one of the oldest cemetery for Christians in the world, and it’s in the Kharga Oasis, in the north of the Western Desert. There are hundreds of mud-brick graves here, dating back to the 4th to the 6th century. Some of the graves are very ornately decorated and have stood the test of time.

There are two notable chapels here, the the Chapel of Exodus (5th or 6th century) and Chapel of Peace (4th century) which have important frescoes that depict biblical imagines, including the exodus of Egypt.

Golden Mummies of the Western Desert

The ancient Egyptians explored the area here, and ruled it too. Archaeologists found many tombs with wall paintings here. There were no tombs of pharaohs, but they did find those of important officials. One of the locations where they found such tombs is the Valley of the Golden Mummies.

A portion of the more than one hundred mummies are stored here in a kind of warehouse, which you can visit. Take a good look at the golden death masks of some of the mummies. These have not lost much of their original lustre and appeal in all the years that have passed. There are also a few of sarcophagi on display here. This burial site wasn’t discovered until 1999, and was given the exciting name The Valley of the Golden Mummies.

Its location disproved the long-held belief that the Egyptians only lived along the Nile: obviously they also lived in the desert. You can see a few of the over 100 mummies found here in a small (and unsightly) museum in the Bahariya Oasis, some of which have been decorated with gold. There are also several sarcophagi on display here.

Most visitors go here with a guide and a vehicle, on tours that include everything, which means you can dedicate your time to having a good look around. Many things cannot be organised on the spot, and if they can, it can be very time consuming.

Do make sure you keep your fluids up, because your body does lose a lot of moisture here, and make sure you’re wearing sunscreen and a head covering to avoid a sun stroke.

Winter is absolutely the best time to visit the Western Desert in Egypt. Between November and January, it’s around 30 degrees Celsius and there is often a cooling breeze. You might encounter a sandstorm, which you’ll feel on every inch of your body. It can be very cool in the evenings, around 10 degrees Celsius, so do make sure you’ve got appropriate attire if you’re camping.

In summer, it regularly gets to 40 degrees Celsius, and it can be wind still. This is definitely not a good time to walk around the Western Desert.

Nile River Cruise
A cruise along the Nile river is the most popular way to see this part of Egypt. There are many options available, with three- and four day cruise the most popular.
Read more
Temple of Kom Ombo

Temple of Kom Ombo
The Temple of Kom Ombo is unusual, because unlike other temples, this ancient Egyptian temple is dedicated to two gods, the falcon god Horus and the crocodile god Sobek.
Read more
Valley of the Kings