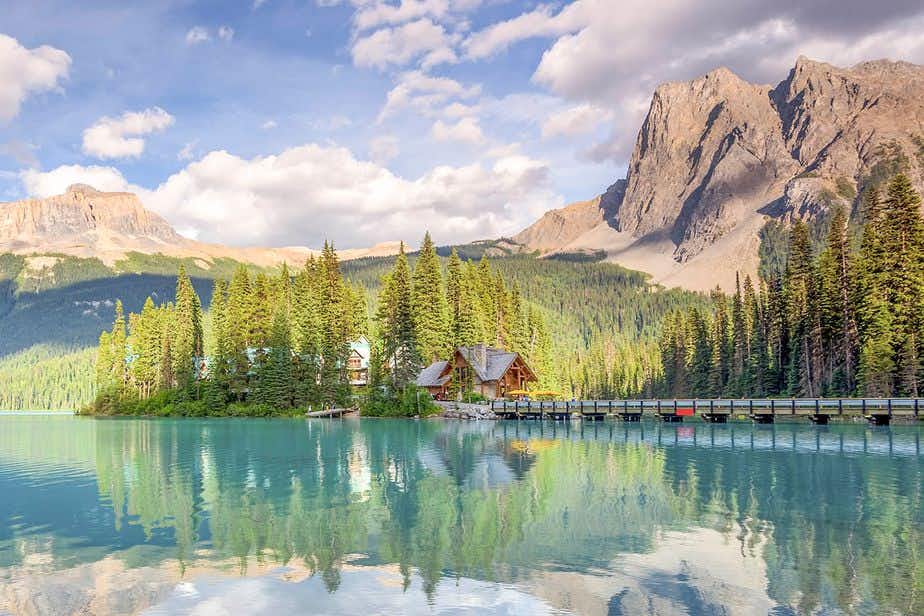 Yoho National park is a relatively unknown nature reserve in the Rocky Mountains. You can find this national park in the western part of Canada.

With numerous lakes in the park with striking blue colours. This is due to the many minerals in the water. And the lakes are therefore not inferior to the well-known, but also busy lakes in the other parks. And Yoho is a nature reserve full of wildlife. This nature reserve is ideal for hiking; a few hours, a day or several days. Along rivers, waterfalls, and more. These are Yoho National Park’s best attractions. These are the best attractions of Yoho National Park.

The Yoho National Park Visitor Center is the perfect starting point for your visit. Here you will get the most up-to-date information about the numerous hiking routes in the park. And about the wild animals, for example where you have the best chance of seeing them. But you can also hear all about excursions with rangers. These hikes are great fun and very informative I noticed during my visit.

The name Wapta means running water in Cree, the language of the Cree Indians. While the river at Wapta waterfall is aptly called Kicking Horse. This waterfall is no less than 150 meters wide. It is almost 30 meters high and very impressive. You can reach the Wapta Falls via a hiking trail of 2.5 kilometers. It’s definitely worth it.

The water drop of Takakaw Falls in Yoho National Park.

Takakkaw means beautiful in Cree. And that is a good description of this waterfall. The Takakkaw waterfall is no less than 254 meters high. This makes it the second-highest waterfall in Canada. It is easily accessible via a wonderful road. This meanders through the landscape. There are rules for RVs, so pay close attention to the signs along the way.

The special Lake O’Hara is according to many people one of the most beautiful lakes in the Rockies. The water is an unprecedented blue, with the steep mountains of Yoho behind it. But there are many smaller lakes here that are also beautiful to visit.

There are several hiking routes around the lake. Such as the Lake O’Hara Shoreline trail (2.8 km), Opabin Plateau Circuit (5.9 km), Linda Lake Circuit and Morning Glory Lakes (3.5 km) and Lake Oesa trail (3.2 km). Take your time in this area. Here you also have a good chance of encountering wildlife such as bears, deer, and countless other animals.

But Lake O’Hara is not easy to get to. You can hike to it; it is 11 kilometers one way. There is also a shuttle bus, which you must book in advance. This can be done on-site, but also online. This is most useful if you want to hike at Lake O’Hara. Make sure you hit the road early. And then book one of the last buses back.

The Seven Veils Falls is a waterfall at Lake O’Hara. You can reach this mighty waterfall via the Shoreline Trail, which runs mostly along the lake. In various places, you can see the water dropping over the rocks, like a kind of veil. Hence the name.

The Spiral Tunnels Viewpoint is unique because here you can see how trains disappear into the mountains. The trains are so long that the locomotive is already coming out, while the last wagon is still visible. You can also see the Yoho Glacier.

Chances are you’ve never heard of Mount Goodsir. Mount Goodsir is the highest point in Yoho National Park at 3,567 meters. And you will see it emerge automatically.

Natural Bridge is literally a natural bridge in the raging Kicking Horse River. The water falls between the rocks, only to reappear.

Burgess Shale in Yoho National Park is a special place. Numerous fossils from the Cambrian period have been found here, which is about 500 million years ago. The fossils are special for several reasons. Scientists have found countless unknown animal species here.

Many of the discovered animals have also the soft parts of the body fossilized. Which doesn’t happen often. The fossils were probably created by the collapse of a sandy seabed wall (or several) and swallowed up all the animals.

Those who want to visit the particularly well-preserved fossils of the strange sea creatures should take a brisk walk. To protect them, you are only allowed to go there with a guide. Fortunately, he provides a lot of information about fossils.

In addition, he also gives the views of various scientists about why the animals are here. The tour is only offered in small groups in the summer months (July, August and September), so book in advance.

The imposing Emerald Lake has unprecedented clear water. That is strikingly blue in colour. When you arrive here you will probably see people kayaking and canoeing on the lake. You can also go out on the lake yourself.

You can also hike around the lake. Note, it can get a bit crowded. To avoid this, you can hit the road very early. Then you have the best chance to see some wildlife. The lake is located at Burgess Shale

A mountain goat in Yoho.

Yoho is famous for its rich wildlife. Such as the brown bear, American black bear, wolf, coyote, cougar, lynx, bobcat, moose and various types of deer. Keep your eyes peeled for special animals such as the bighorn sheep and snow goat. At the visitor center you can get more information and tips on the wildlife of Yoho.

Yoho is easily accessible by (rental) car. And therefore easy to combine with a visit to Banff and Jasper National Park via the Trans-Canada Highway. You drive from Lake Louise into Yoho National Park.

What is the best time for Yoho National Park?

You can visit the area all year round. But in winter several roads can be closed due to snow. While various attractions are not accessible.

It is best to go in the spring. Flowers bloom here from May, adding something extra to the already impressive landscape. And then many animals are also on the road, which increases the chance of an encounter.

Niagara Falls
The Niagara Falls is a once in a lifetime experience. You must hear and feel the water, as well as experience its brute force. It is useful to prepare your visit in advance to get the optimal experience. And visit the waterfalls in Canada and in the United States. These are the best tips for Niagara Falls.
Read more
Northern Lights

Northern Lights
The Northern Lights; a must see with your own eyes at least once in your life. This spectacular phenomenon of dancing curtains are also referred to as Aurora or Aurora Borealis.
Read more
Pan-American Highway

Rocky Mountains
The Rocky Mountains are a mountain range in the United States and Canada. It is home to numerous famous national parks. But there is more to discover, much more. The rugged nature in particular appeals to many people. Which will quickly make you feel insignificant.
Read more
Tundra Lodge: Sleep amongst polar bears

Tundra Lodge: Sleep amongst polar bears
The Tundra Lodge is a unique rolling hotel. Every autumn this hotel is driven onto the tundra in Canada to go polar bear spotting. These creatures wander past and curiously come to take a closer look. Very close, actually. And yep, it’s as cool as it sounds.
Read more
Zipline Niagara Falls

all 20 articles on Canada