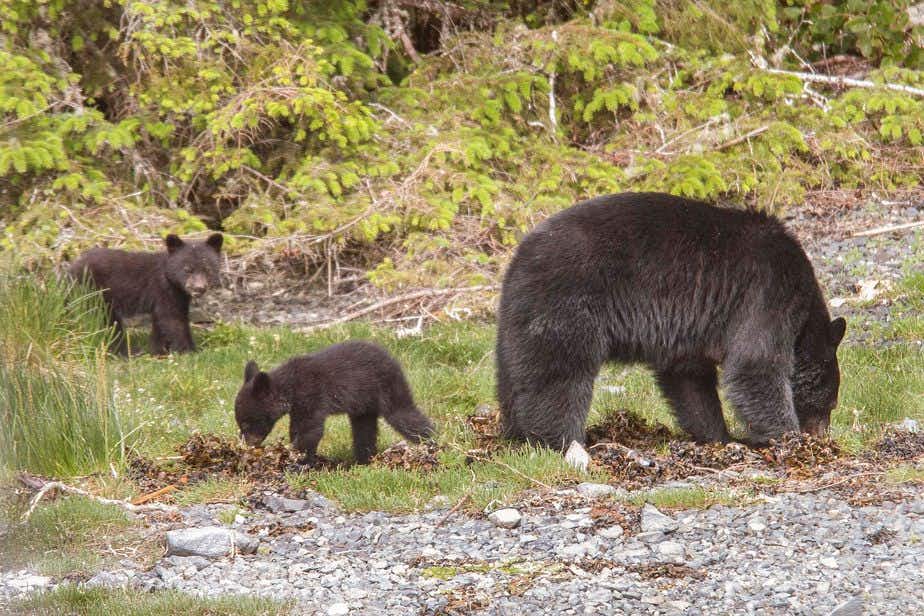 The black bear is high on the wish list of many tourists. And, to be fair, you have a pretty good chance of seeing them. Especially if you go out early in the morning and in the afternoon.

The American black bear is a lot smaller than its brown brother. And, logically mostly black in color. Usually yes, because there are brown black bears too.

This species is often seen in the forests. And near people, such as campgrounds, suburbs and garbage places. This is the only species in the world that is growing in numbers. The reason; he adapts to man.

Where do black bears life?

You can come across an American black bear in many national parks of the United States and Canada. You need some luck. Although many black bears are not afraid of people (anymore).

Which also regularly causes problems. Then the animals must be stunned and released back into the wilderness. If that doesn’t help, they’ll be killed. Never feed these animals. You actually seal his death with that. The Latin name of the black bear is ursus americanus.

Copper Canyon
Copper Canyon is one of the most beautiful places in Mexico. It is one of the roughest parts of the country. It is an area that you can visit easily, although it can be quite adventurous.
Read more
Glacier Bay National Park

Grand Canyon
The Grand Canyon is the largest canyon in the world. This natural wonder in the United States is definitely worth a visit., in any season of the year.
Read more
Katmai National Park

Katmai National Park
Katmai National park is the ruggedness of Alaska at its best. The park contains no fewer than 15 volcanoes, of which 5 are still active, including the Katmai and the Novarupta. The coastline is 160 kilometers.
Read more
Rocky Mountains

Rocky Mountains
The Rocky Mountains are a mountain range in the United States and Canada. It is home to numerous famous national parks. But there is more to discover, much more. The rugged nature in particular appeals to many people. Which will quickly make you feel insignificant.
Read more
The Adirondacks

The Adirondacks
The Adirondacks is the largest protected area of woodland in the United States. This area has many forests and countless mountains. Famous among hikers is Algonquin, the second highest mountain in the Adirondacks. It's just outside the town of Lake Placid.
Read more