Safari in South America; the best place to see the jaguar 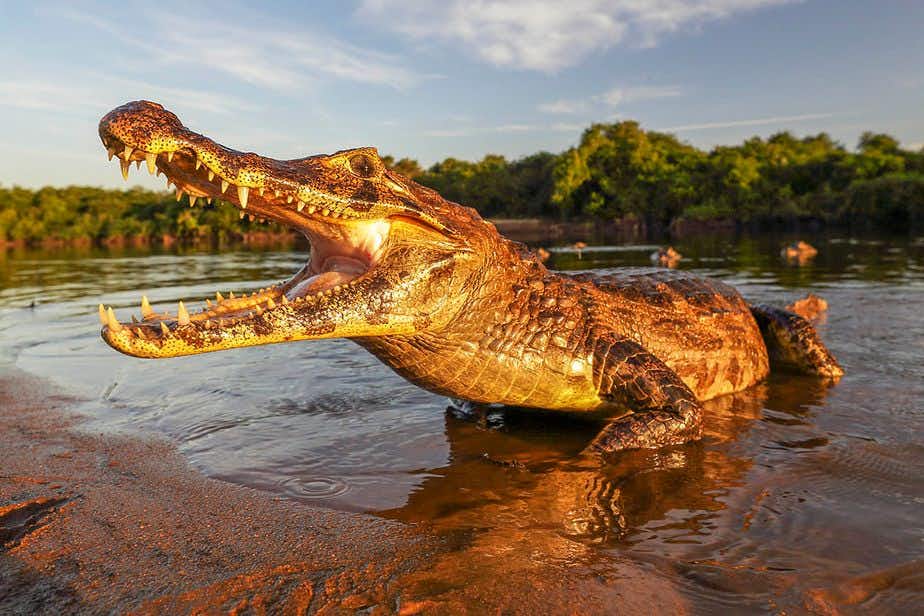 The Pantanal is an immense swamp area in the west of Brazil. A small part can be found in Bolivia and Paraguay. The size of the area is still under discussion. Usually, a size of about 210,000 km2 is used. It is home to an unprecedented amount of wild animals. In a particularly beautiful landscape. It is one of the absolute gems of nature in South America.

This area is relatively easy to visit. Various trips are offered with various excursions and overnight stays in special eco-friendly lodges. During your visit, you can discover many sights and attractions.

The Pantanal is the largest wetland area in the world, and relatively unknown. This gem surpasses its much better-known brother the Amazon when it comes to the diversity of plants and animals. Including the jaguar.

What animals can I see in the Pantanal?

Jaguars hunt caimans in the Pantanal.

The immense swamp area is home to countless special animals. The absolute highlight is the jaguar. This animal shows itself regularly. Like many other animal species, including the nearly extinct hyacinth macaw. Just like the wonderful giant anteater. When you are here it feels like a safari, but different. I have been here for over two weeks and couldn’t believe my eyes.

Seeing the jaguar is the absolute highlight for many people. And you have a fair chance here if you stay at a farm-cum-lodge for several days. These are farms that have been converted so that they can also accommodate tourists. Such as the famous Refúgio Ecológico Caiman, where a major project for jaguars has been set up to protect these animals. As well as projects for other animals. Where you can get a lot of information. And see the animals for yourself.

Other animals you will see are capybara (the largest rodent in the world) and spectacled cows. But you also have a chance to see the little anteater, South American tapir, green anaconda, swamp deer, howler monkey, armadillo, and countless species of birds, including many parrots, toucans, ibises, and herons for example.

When I was here I saw pretty much all the animals in a week. Sometimes from far away, like the jaguar, and sometimes up close, like the giant anteater. You go out in jeeps, although you can also do a walking safari. In which you go out with a guide, who is usually a biologist. He or she knows a lot about the wildlife as well as their behaviour. Which gives certain depth to your visit. There are also night safaris, which open up a whole new world.

As an example; the Pantanal is nine times the size of the famous Okavango Swamp in Botswana. But that’s a swamp delta, while the Pantanal only floods once a year. In fact, the Pantanal is not a swamp, but an immense flooding area. It has two seasons, a dry and a wet season.

Unique mix of farm and nature

One of the rarer animals; the South American tapir. ©Corno van den Berg

The Pantanal is a special area, where farmers and nature conservation go hand in hand. At least with a number of farmers, not with all. But the arrival of tourists and their money has created an alternative flow of money. As a result, more and more farmers leave the animals alone. And this unique nature reserve has a chance to survive.

Protection of the Pantanal

In April 2018, representatives from Brazil, Bolivia, and Paraguay signed a unique statement. In this, they promise to protect the Pantanal and to use the special nature reserve in a sustainable manner. So that this unique nature reserve remains protected for the future. But the question is whether this will actually happen.

How did the Pantanal come about?

Every year there is about 1,500 mm of rain here. But the area owes its existence mainly to the raindrops that fall hundreds of kilometers away. And reach the Pantanal via the Paraguay River. The water level of this river rises several meters annually, temporarily turning grasslands and forests into a large swamp. Complete with islands, lakes, and waterways.

The combination of fertile soil, sunlight, and water provides a lot of vegetation. Scientists have counted more than 3,500 species of trees and plant species in the Pantanal. In the flooded areas are mainly carana palms. The higher sandy soils are mainly home to various types of ficus and acuri palms.

Pantanal landscape with birds and caimans.

The wildlife of the Pantanal

The plants and trees in turn attract many animals. The Pantanal is often compared to East Africa, the cradle of the safari. According to them, there are just as many predators, reptiles, and large birds in the Pantanal. Only the number of mammals is less, much less. However, the Pantanal does have the largest collection of crocodilians in the world, about ten million …

Appropriately here are many large farms, called fazendas. The Pantaneiros, the local cowboys, live here. The hardened boys take care of the many cows and horses that are kept here. They regularly bring the animals to dry soil with fresh grass, which sometimes causes dire situations at high tide. One thing is clear, here people are a guest.

A capybara family with young.

When is the best time to visit the Pantanal?

April to October is the best time to travel to the Pantanal. But then it is also relatively busy. Although it is not too bad here. It is wise to book in advance for the large fazendas and eco-lodges.

If you would like to see many bird species, it is best to go in July, August or September. From November to March it is very hot in the Pantanal. In March the water starts to subside again and countless pieces of land become passable again.

Many hotels and fazendas are closed in the rainy season. Several roads are closed or impassable.

Discover Iguazú from Argentina and Brazil

Discover Iguazú from Argentina and Brazil
You have to see the waterfalls of Iguazu Falls from both the Brazil and Argentina side. That can easily be done in one day, so that you can visit these impressive waterfalls at their best. The day will probably be one of the highlights of your trip.
Read more
Iguazu Falls Boat Tour

Iguazu Falls Boat Tour
One of the best excursions is visiting Iguazu Falls by boat. The strong currents make it a challenge for the captain to get to the foot of the waterfalls. The mist created by the splashing water will provide both an intense experience and a wet set of clothes.
Read more
Rio de Janeiro

Rio de Janeiro
Rio de Janeiro in Brazil has a rich and boisterous past. Once the home of the Tamoio Indians, it is now a city full of opposites, where the poor and the rich live side by side.
Read more
Sugarloaf Mountain

Sugarloaf Mountain
Sugarloaf mountain in Rio de Janeiro is known locally as Pão de Açúcar. The top can be reached on foot on a nice hike. There's also a 1,400 meter long cable car, which offers amazing views of the city and the surrounding area. It is a wonderful excursion during your visit to Rio.
Read more
Take a Road Trip through South America

Take a Road Trip through South America
You can easily travel from north to south, or vice versa. Or put popular countries like Peru and Bolivia together. Or take a tour of Patagonia. The fact remains that a tour of South America is one of the most diverse journeys on earth.
Read more

all 11 articles on Brazil