Okavango Delta in Botswana: 20 Tips for a Safari - AmazingPlaces.com 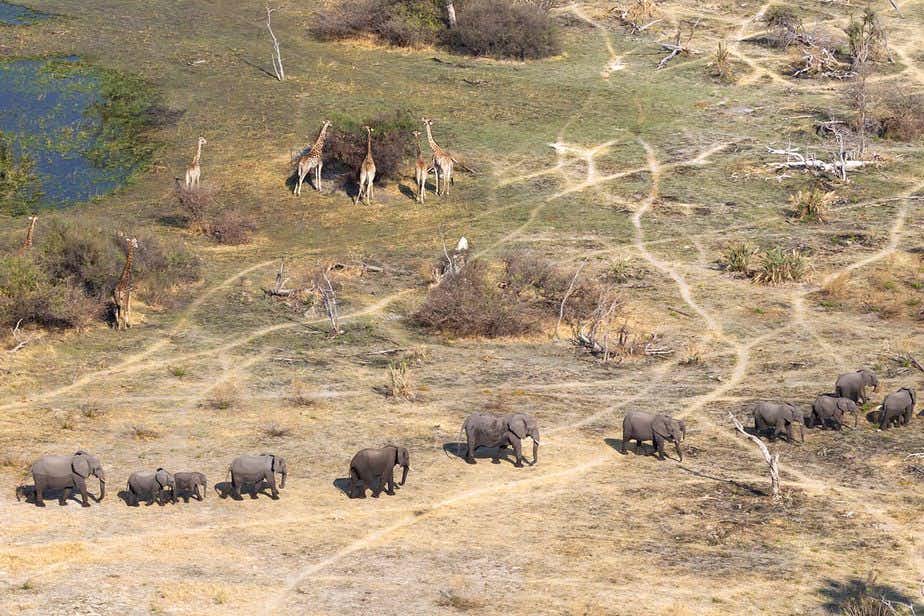 The Okavango Delta in Botswana are among the richest nature reserves in the world. In this national park you may walk, but also use a jeep or a boat (mokoro) to go on safari. You can spot the Big Five (lion, elephant, leopard, hippo and rhino). But a meeting with the San is also a highlight.

The marshes of the Okavango are truly unique. It is the largest interior river delta in the world. And this enormous river never reaches the sea. This is a place with its own climate. This nature reserve is on the World Heritage List by UNESCO.

Largest freshwater delta in the world

The Okavango Swamp is the largest interior delta in the world, created by a ‘river that never finds the sea’. This enormous marsh holds an unprecedented wealth of fauna, with the notorious lions that hunt elephant. It is also the habitat of bushmen and other rich cultures. According to many, the Okavango Delta in Botswana constitutes the ‘real Africa’.

Endless plains with savannahs, rivers and river forests. Everywhere you look you can see wildlife, lots of wildlife. The Okavango is an enormous wildlife area in the heart of Africa, running right across countries like Angola, Namibia and Botswana. The part that runs through Botswana is the most famous. World famous, even.

The Okavango is extremely large and almost impossible to comprehend with its 28,000 km2. It is often referred to as the biggest marsh in the world, but the Pantanal in South America is nine times as big. However, the Okavango is the biggest interior delta. Once, the Okavango belonged to the lake Makgadikgadi, an ancient old lake that dried up about 10,000 years ago.

A leopard in the Okavango Delta.

What remained is the Okavango river. Originating in the highlands of the Bihé Plateau in Angola, the river flows through Namibia and into Botswana. It never reaches the sea, though. In Botswana, the water flows across very flat terrain, causing it to constantly branch off. Everywhere, little pools and streams are formed as the water very slowly flows south. The Okavango river is the life line for this enormous area.

The river deposits salts on the sediment, which causes plants like many grasses and reeds, lilies and paper plants to flourish. This slows down the flow of the water even more and provides a living environment for many animals. The river partially ends up in lake Ngami, the rest evaporates on the Makarikari plain, which is part of the Kalahari desert.

Search for the elephant hunting lions

You need a strong stomach for this … but it is possible to go and look for the notorious Savuti lions. They are known for hunting elephants. And they don’t just go after the young, but the adult animals as well. Once an elephant is caught, the lions will eat it alive. So you just might witness scenes you will not be able to forget too easily…

Walking Safari with a guide

It may sound rather illogical, but this area is famous for walking safaris. Led by an armed guide, you will search for wild animals. The feeling that you’re much more vulnerable, makes this an extraordinary experience. It will be harder to see wild animals than during a safari by jeep. The emphasis is more on trees, flowers, insects and such. You will go places where others never do. It is also possible to go on hikes for multiple days and spend the night in various camps.

Small plane over the Okavango Delta

You can travel to the Okavango Delta by air, but you can also book a special flight to get a proper idea of the immensity of the area. Flying across the delta like a bird, you will understand the purpose of this massive body of water. The flights depart from the town of Maun and vary from anything between half an hour to a full day flight.

Go on a horseback safari

The Okavango is one of the few places in Africa where you can encounter a full range of wild animals, while on horseback. If you enjoy riding, this is something that is really worth a try. A park ranger will accompany you and he will step in when there may be danger. You may go out for a couple of hours, but also for several days.

Dare to angle the tiger fish or African piranha

The tiger fish is also known as the piranha of Africa. Only, this is a much more aggressive fish. Just looking at its teeth will make you understand why this is such a feared creature. Its strength makes it a handful for any fisherman. The Okavango is famous for its tiger fish and you can drop a line in the water with the help of an expert guide. This is a real challenge, for sure.

The night safari has a different atmosphere than the day safari. The light is limited and you depend mostly on the eyes of the spotter. The driver has a lot of experience. Armed with a lamp, you can also search the bushes for glowing eyes or unexpected movements.

You will soon notice how difficult it is to spot typical nocturnal animals. You might see porcupines, various types of genets and the African wildcat. But if you see something, it gives a lot of satisfaction. Night safaris are not allowed everywhere in the Okavango. Ask about it in advance.

Enjoy a Sundowner by the water

A sundowner with an amazing view in the Okavango Delta.

It is tradition at the end of the day. To bid the sun goodnight with a beverage, in a peaceful spot. Birds are looking for a place to sleep, while boisterous hippos will let everybody know that they are in the water. As the daytime animals slowly make way for the nocturnals, a whole different world unfolds. Have a good look around you, this is something you will most certainly remember for a long, long time.

Discover the Little Five on safari

The ‘Big Five’ is famous among travellers on safari. In the Okavango, the term ‘Little Five’ is often heard as well: animals that are very easily overlooked. Like the: Elephant Shrew, Ant Lion, Red Billed Buffalo Weaver, Leopard Tortoise and Rhinoceros Beetle.

The Okavango is particularly a place where you come across so many animals, which you would not see in other safari regions. For instance, the sedge and bush frogs, which you may see sitting in the reed. There also is the African Pygmy Kingfisher, an extremely colourful little bird of only 13 cm.

Large parts of the Okavango Delta become flooded every year. This first occurs in northern parts due to the extra flow of water. It happens during the local summer, around November and December. Islands disappear and many animals are driven back to dryer patches. Because of the heat, the water dries up quickly and through clouds it falls as rain in the southern parts in the months of May and June. This part of the Okavango then slowly becomes submerged. So the Okavango has its own climate.

Fresh water is a precious substance in Africa and the pressures on the Okavango River are increasing. Namibia has had plans to transport water from the Okavango to drier middle parts of the country for a long time. Other plans involve building hydro-electric power stations, among other things at Popa Falls in Namibia.

Just about anything you might encounter on an African safari lives here. There are about 150 species of mammal. Of these, most people are interested in seeing the ‘big five’. These are: lion, elephant, African buffalo, rhinoceros and leopard. The latter is the most difficult to spot and you certainly have no guarantees. However, the quest in itself, in this amazing setting, is more than enough.

Beste time for the Okavango Delta

The rainy season is from January until March. Most animals have their young between November and March, so also in the rainy season. The vegetation is green in this period, with many young leaves that serve as food. But that most animals are a lot more difficult to spot because of the dense foliage.

In the colder months (May to November), most brushes are leafless and the animals will move towards the water more. This is when you can sometimes see countless numbers of animals. The months of July and August are the high season, which is when this place will be teeming with tourists.

How to get to the Okavango

Maun is the nearest city in Botswana. It’s two hours driving from the delta. Many travellers will rent a car, preferably a four-wheel-drive) and explore the region by themselves. If you wish to go deeper into the delta, the best thing to do is to rent a small aircraft. You may opt to go on lodge excursions.

The Okavango is included in many tours across Southern Africa. But be aware, take your time for this wilderness. Most travellers think their visit is way too short.

Read My Tips
Hunt with the San people (Bushmen)

Hunt with the San people (Bushmen)

Hunt with the San people (Bushmen)
The San people are believed to be the ancestors of all humans. Once upon a time these hunters lived all throughout the south of Africa, but now they mostly live in the Kalahari Desert. Unfortunately, much of their culture has been lost.
Read more
Makgadikgadi Salt Pan

Moremi Game Reserve
The Moremi Game Reserve covers about a third of the entire Okavango river delta. The swamps of the Moremi are particularly popular for safaris because of the many animals there. The Big Five (elephant, lion, leopard, buffalo and rhino) can be found here, amongst others.
Read more
Night safari

Night safari
You really can’t compare a night safari with a daytime safari, of course it’s harder to see anything, but it feels like a completely different world, and that’s magical.
Read more
Nxai Pan National Park

all 10 articles on Botswana