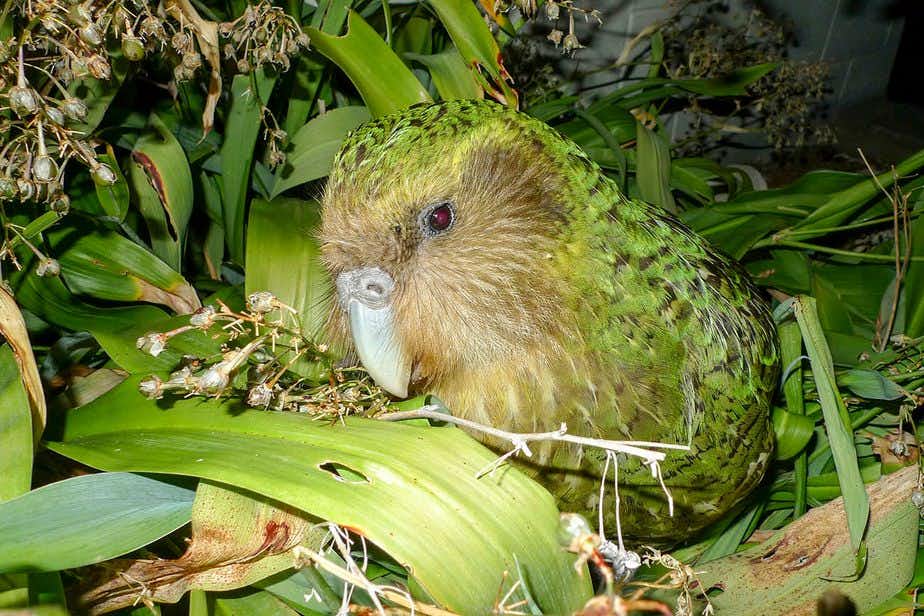 The kakapo is one of the strangest birds in the world. With wonderful behaviour, and very rare. Though almost extinct, you have a chance to see this bird.

It is also one of the most endangered species. This nocturnal parrot can not fly which makes the bird, its eggs, and its young easy prey for non-native animals such as cats and rats. As a result, only 50 animals lived in the 1990s. The English name is the same kakapo, while the Latin name is Strigops habroptilus.

The kakapo is one of the most extraordinary animal species in the world. It is a parrot that resembles an owl. It only lives on the islands of New Zealand, it is rarely spotted.

It is one of the strangest birds in the world. Kakapos live to be extremely old, more than 90 years is normal. They are also large, sometimes as much as 60 cm. In recent years, numerous measures have been taken to protect the animal. The chance that you will encounter this bird is almost zero, but if you do it is big news.

Animal of the year in New Zealand

In 2020, the kakapo was named New Zealand’s Animal of the Year. Something that already happened in 2008. The elections in 2020 were very tumultuous, as it turned out that there was heavy fraud. It turned out that someone had voted for the kiwi more than 1,500 times. After which the election became world news.

Comedian and sex-hungry kakapo are hit on the internet

It is a legendary video on the internet. The famous English actor Stephen Fry goes in search of the almost extinct kakapo. Their meeting unwittingly reveals the problem of New Zealand’s species. Note the comedian’s commentary.

British actor and comedian Stephen Fry was on Stewart Island in New Zealand for his documentary series Last Chance To See from the BBC. He learned about the rare animals that live there and met Sirocco, a male kakapo.

At first, they only wanted to film the animal, but Sirocco is shy about something: a female. This creates a spectacular scene. With unique commentary by Stephen Fry. The video has now been viewed millions of times on YouTube.

Best place to see this animal

On Stewart Island in the southern part of New Zealand, you have the unique opportunity to meet the kakapo. This large wingless night parrot has been released on Ulva Island. Tourists can get acquainted with this animal. Book it on time, because this tour is very popular. There are probably still some of these nocturnal animals living in the forests, but you probably won’t come across them on your own. So this tour is the ultimate opportunity.

Brown Kiwi
The brown kiwi is one of the most special birds on the planet. Which with some luck you can see on your trip to New Zealand. It is absolutely worthwhile to make an effort for this special animal.
Read more
Chimpanzee

Chimpanzee
The chimpanzee is an animal that appeals to the imagination. This great ape is less popular than the mountain gorilla, but that is not doing this majestic animal right. An encounter with a troop of chimpanzees on a chimpanzee safari in Africa is more than impressive. And you quickly notice why this animal resembles a human the most.
Read more
Jaguar

Jaguar
The jaguar is one of the most beautiful animals, and the ultimate predator. You will not spot this animal easily. Although you do have a fair chance if you go to the right place. The meeting can take a few seconds, but also more than half an hour when the animal is hunting.
Read more
Striated Caracara

Striated Caracara
The striated caracara is a special bird of prey, endemic to the Falkland Islands and some nearby other islands. Surprisingly, this bird is not shy and easily spotted by locals and tourists on the islands.
Read more
Whale Shark

Whale Shark
The whale shark is often high on many travellers' wish list. To watch this majestic animal is a special thing. You have a good chance at these locations.
Read more
White Rhino

White Rhino
The white rhinoceros is the most commonly seen species in Africa. If you go on safari, there is a good chance that you will encounter these. These unwieldy looking animals can run remarkably fast, and sometimes challenge the jeep.
Read more

all 38 articles on Wildlife