Whale shark: The best places to see this animal - AmazingPlaces.com

Largest fish in the world 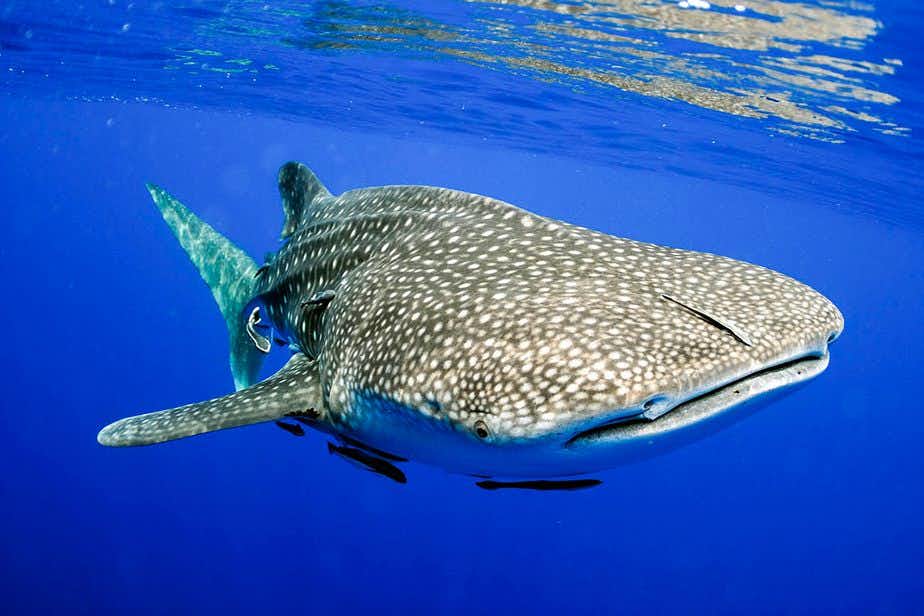 The whale shark is often high on many travellers' wish list. To watch this majestic animal is a special thing. You have a good chance at these locations.

Seeing the whale shark in the wild is magical. And completely harmless. These gentle giants range in length from 8 to 15 meters. They do not eat other animals, but tiny plankton. The whale shark is the largest fish in the world. And it is not a whale as is often thought. But it is a kind of shark. Although you do not have to be afraid of this animal at all.

Snorkel with a whale shark

Snorkelling with a whale shark.

You can snorkel with these friendly giants in various places. The animals are often super calm, so you can watch them well. For many divers and snorkelers, an encounter with this animal is an absolute highlight. So ask on the spot if there are any reports of encounters. And get into the water.

These popular places can get very busy, it might even gets too busy according to many. You can go into the water for half an hour with hundreds of others, which is probably a bit different than you expect. Nevertheless the experience is magical. Whale shark tours are largely regulated, it is big business.

This is how a whale shark eats

With their special gills, whale sharks sift the tiny plankton from the water. A whale shark is often seen swimming with its mouth open. This usually happens just below the surface of the water, and often in the vicinity of fishermen, which creates a special bond between the fishermen and whale sharks. They feed the animals, but not everybody likes that. This happens for instance in Oslob in the Philippines and in other locations

Scientists still know surprisingly little about this animal. In the meantime, projects have been set up to collect photos of animals, so that it may be possible to find out whether they are migrating, for example. The official Latin name is rhincodon typus.

Belize Barrier Reef
The Belize Barrier Reef is Belize's crown jewel. This vast coral reef is simply beautiful, with crystal clear waters and an incredibly rich marine life. You can visit it on different tours or on you own.
Read more
Cozumel

Cozumel
The island of Cozumel is off the coast of Mexico. It's a much-loved destination for sun lovers, divers and snorkel lovers. Besides its many beaches and coral reefs, you'll also find historic sites of the Maya and Toltec peoples.
Read more
Galápagos Islands

Galápagos Islands
The Galapagos Islands in Ecuador is a must if you're a nature lover. Just as natural scientist Charles Darwin did centuries ago, which led him to his famous theory of evolution. Darwin put the special volcanic islands on the map. Nowadays the remarkable animals keep on doing it.
Read more
Klein Bonaire

Klein Bonaire
Klein Bonaire is an uninhabited island off the coast of Bonaire. It is famous for is coral reefs and colourful fish. You can take for a swim or a snorkel tour around the island. Or just lay in the sun on the beach.
Read more
Whale sharks at Holbox Island

Whale sharks at Holbox Island
Isla Holbox is a small island of white sandy beaches off the coast of Mexico. This island has been known for years as one of the best places to meet whale sharks.
Read more
Whale sharks at Isla Mujeres

Whale sharks at Isla Mujeres
Isla Mujeres in Mexico is one of the best locations in the world to swim with a whale shark. What a unique experience. And the animals come remarkably close.
Read more