World famous for the annual migration of wildebeest and zebras 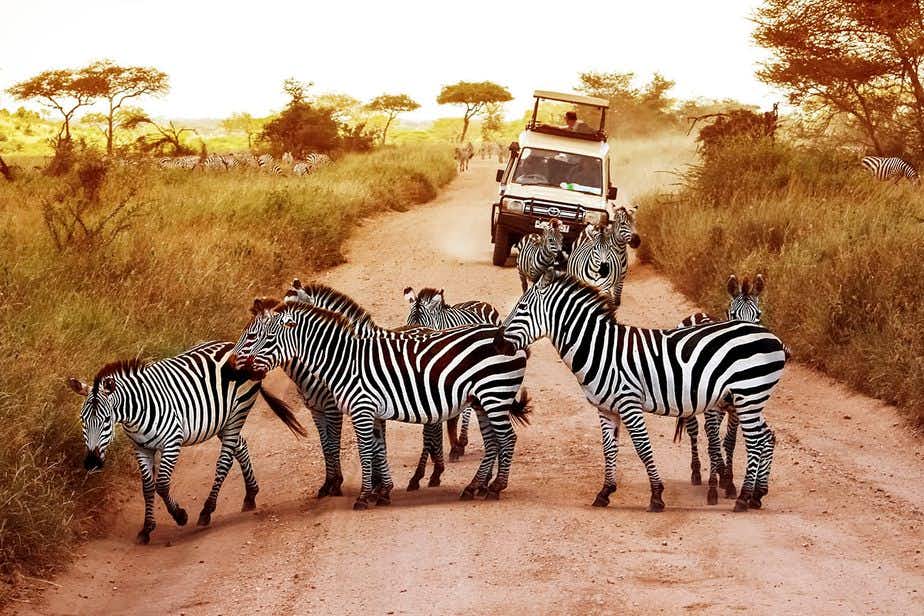 Serengeti National Park in Tanzania is world famous. It is the home of the Big Five, but also known for the annual migration of millions of blue wildebeest, zebras and Thomson's gazelles.

As far as the eye can see, there are savannahs, large grassy plains, with every now and then an acacia tree. There is notably little water, except in the wet season. The region also has many forests, rivers and rocky hills. However, the Serengeti plain is the key attraction.

For travellers this is a much sought after destination. Particularly the part in Tanzania that is larger and provides ample opportunities to meet extraordinary animals, without a human being in sight.

The Serengeti plain is one of the oldest safari territories in Africa. It’s all in the name: Serengeti is derived from the Maasai language and means endless plains. It is somewhat confusing, though. The Tanzanian part is called Serengeti, but in Kenya it is called the Maasai Mara.

The annual migration in the Serengeti

The annual migration of millions of blue wildebeest, zebras and Thomson’s gazelles is well-known. The footage of hungry Nile crocodiles grabbing the animals as they were crossing a river are known the world over. Officially, the Serengeti plain is a nature reserve that lies in two countries. If you want to experience the Great Migration visit between February and June.

You can rent a car and drive around the national park. You will probably see less (a guide has hawk eyes), but the experience is completely different. Keep in mind that you are well prepared to go out, because if you get lost you might have a big problem. You can also hire a local guide who knows the way. And possibly help with spotting animals. it's your choice.

Walking Safari in the Serengeti

It sounds dangerous, but walking safaris don’t result in very many casualties. Guides and park rangers know the animals well and will fire warning shots if they come too close. Worst case scenario, they will shoot the animal, but it hardly ever comes to that. Most of the animals are afraid of people on foot.

Despite seeing less than when you’re in a jeep, there is no way of getting closer to the African nature than by walking safari. You can hike for several hours, but also go from one camp to another, for instance.

Two cheetah cubs in the Serengeti.

In the early hours of day the nocturnal animals will turn in and the day animals will wake up. This process has been going on for centuries and can still be experienced in the Serengeti. If you set out early enough, you may see hyenas and jackals on their final quest for food for the night.

Meanwhile, the gazelles are getting up and starting to graze and the sun gradually rises over the horizon. Other advantages are that you will be ahead of most tourists and that the soft light will add an extra dimension to your photos.

The Maasai are well-known cattle farmers in Eastern Africa. Meeting them is very special and you will see them in the area around the Serengeti. They’ve kept most of their traditions during the last decades. They still use the meat of the goats, the blood and the milk, and also the skin and bones for accessories. Take your time when you meet them, they’re very friendly. If your lucky you can attend a wedding

Those who go camping in the Serengeti will not only be impressed by the sounds, but also by the night sky. On a cloudless day, of which there are many, there will be no light pollution and you will be able to see the stars, the Milky Way and planets extremely well.

You may also see the Southern Cross, which is only visible in the southern hemisphere. Many lodges and hotels have telescopes you can use to gaze at the sky. Half an hour of staring will enhance the feeling that you are far away from civilisation.

Sleep in a Tented Camp

The luxury lodges are very appealing, but also expensive. If you wish to stay here at a cheaper rate, you may want to go camping. But there also is a combination of the two. The tented camps are luxury safari tents with a real bed, often include a shower and many other amenities. Ideal for someone who wants to spend the night close to nature and still be comfortable.

In the Serengeti there also are several ‘mobile tented camps’ that are set up in the wilderness for the season. The choice is up to you. When preparing for your journey, ask about the possibilities to include these types of tented camps as accommodation.

The Great Migration can be seen from February til June in the Serengeti.Other then that, the nature reserve can be visited throughout the year, except for March until May when it’s the wet season. The roads will be almost or completely inaccessible.

From all over the world you can book a flight to Dar es Salaam in Tanzania. The Serengeti lies at about 900 kilometers from the capital. On the way, right before you get to your destination, you will reach the Ngorongoro Crater. There are domestic flights that go to the Serengeti as well.

Climbing Kilimanjaro
Climbing Kilimanjaro in Tanzania is exhilarating. It is the highest mountain in Africa. It’s a mythical mountain that you can climb on a multi-day hike. These are the best tours recommended by experts.
Read more
Gombe Stream National Park

Ngorongoro Crater
The world-famous Ngorongoro Crater in Tanzania is a fertile area with an abundance of wildlife, such as lions, buffalo, hyena and many more. Imagine going on safari inside the crater of a volcano. And you can at Ngorongoro Crater.
Read more
Serengeti Balloon Safari

Serengeti Balloon Safari
A Balloon Safari in the world famous Serengeti National Park. On this amazing tour you can spot wildlife from above. It gives you a great view of the plains of Africa.
Read more
Spend the night in Highlands Camp tree house

all 13 articles on Tanzania