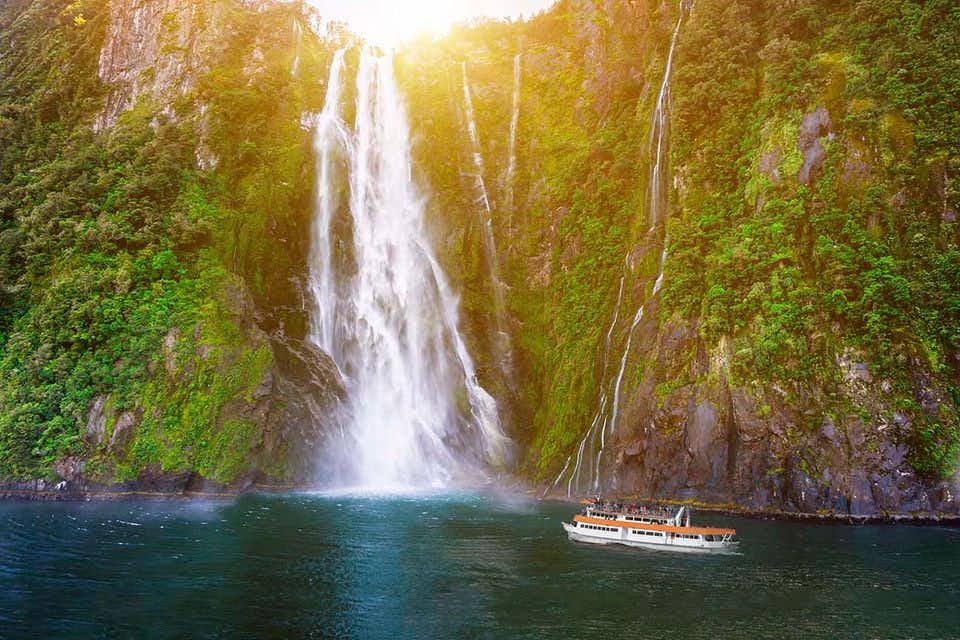 Fiordland National Park is a rugged nature reserve in New Zealand. The fjords are world famous, but you will also find waterfalls, rivers, lakes and forests here. Full of special wild animals such as kiwi, kea, takahe, pukeko and weka. You might also spot other wildlife like penguins, glow worms and fireflies. It is also one of the best hiking areas in the world.

Fiordland is the largest national park in New Zealand, and this area on the South Island has a long history. Scientists believe that the mountains here are around 500 million years old. Around 200 million years ago, volcanic activity caused the sandstone and limestone rocks to rise out of the water.

Due to its location in the most south-western part of the South Island, the landscape is exposed to the elements. Especially during the ice age this brought forth many changes. The mass of ice pushed down the land below, while it slowly slid into the Tasman sea. The melting snow also caused erosion that created gorges, valleys and lakes.

The fjords and many lakes in the area are silent witnesses to this endless process. Big lakes such as Te Anau and Lake Manapouri are in fact just dips in the earth that filled up with the water from the melting ice that came off the surrounding mountains. The elements are still sculpting this landscape: the large amounts of rain impact the rocks, and rivers carve up the landscape.

The famous English explorer James Cook was likely to be the first white man to visit this part of New Zealand. He was the one that named Doubtful Sound, as he wasn’t sure if he would ever make it out of the fjord. Milford Sound became famous in the 19th century, when the author Rudyard Kipling, who wrote The Jungle Book, said that Milford Sound is the 8th wonder of the world. That’s quite a statement, since the first seven were manmade…

The fjords are perfect to explore on foot. ©Corno van den Berg

Fiordland National Park is a perfect place to visit for active travellers, those who like to be outdoors and who enjoy being out in impressive landscapes. It’s great for people who like to walk, kayak and look at the interesting flora and fauna. The huge area lends itself well to those who like to spend days exploring, and who are not afraid of bad weather. Because that’s part of one of the most rugged areas in the world.

Fiordland National Park is an extremely wet part of the world, one of New Zealand’s most-rained-on areas. There is between 5,5 to 7 metres of rain in Milford Sound per year.

You’re also likely to encounter the pesky sandfly here, tiny biting insects that are most found in sandy areas during the day. They are small enough that a mosquito net will not stop them. Their bites are more painful than a mosquito bite and will last longer too. Enquire with the locals whether they will be an issue when and where you’re going.

Milford Sound
Milford Sound is the most famous (and popular) fjord in the Fiordland National Park. This fjord cuts a 22-kilometre inlet into the rugged New Zealand landscape, with the famous Mitre Peak as centrepiece.
Read more
Milford Track

Milford Track
The Milford Track is a famous walking route in the Fiordland National Park. The route is 53 kilometers long. You walk straight through the famous environment of the most famous fjord: Milford Sound. This is a walk that is best done in four days. Even though five is allowed. Or six.
Read more
Sutherland Falls and Quill Lake

Sutherland Falls and Quill Lake
The Sutherland Falls are relatively unknown, but belongs with the ‘big guys’ when it comes to waterfalls. It’s around 580 metres high, with three points where it cascades down in Fiordland National Park.
Read more
Te Anau

Te Anau
Te Anua is the base from which to head to Milford Sound. The town is small and shows how New Zealanders like to showcase its natural wonders: no big fanfare, and controlled tourism options.
Read more