Highest dunes in the world, and the famous Sossusvlei and Deadvlei 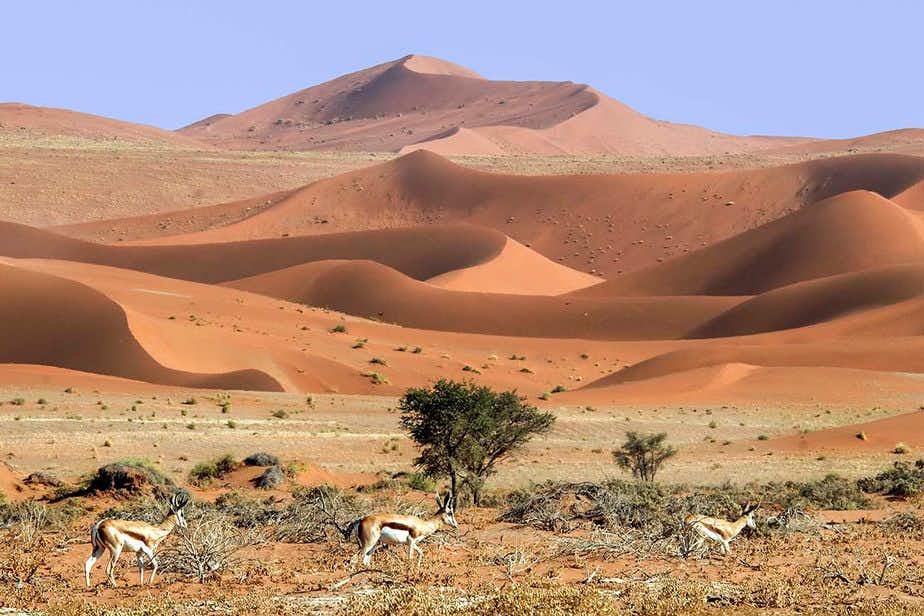 Naukluft Namib National Park encompasses much of the Namib Desert. This national park is home to the most important and most beautiful part. You can easily visit this nature reserve in the west of Namibia.

Namib-Naukluft National Park has many famous areas, such as:

Back in 1996, the Dutch author Ton van der Lee bought a car in Cape Town and started driving north. He ended up in the town of Solitaire, the only place with fuel for many miles. Besides the petrol station (which often doesn’t have fuel), there was a small shop and an old house.

Two men lived there, who mostly lived off hunting. Van der Lee started a campsite here, and a small restaurant, which still bears his name. When it got too busy, he left town. These days, it’s mostly a rest stop for tourists. Take your time here. Try the delicious fresh apple pie, and take photos of the many rusty cars along the road.

You won’t find the Big Five of safari animals here, but they do have a Little Five. One of those is the Namaqua chameleon, one of only two kinds that live in Namibia. There are also several lizards and spiders that can handle the heat of the desert. A special little critter is the FitzSimons burrowing skink, which can only be found here.

The sand-dwelling spider, also known as a cartwheeling spider, is a remarkably light-coloured spider. And the most famous might be the Peringuey’s adder, also known as the sidewinder. You can take a tour to find these small creatures, which is really worth doing. Ask locally to find a tour operator.

The Welwitschia Nature Drive in Namib-Naukluft NP offers you the chance to see quite a special plant: the Welwitschia.You can only see this plant in the southern parts of Africa and it can reach up to 1.500 years in age. The drive could also include encounters with animals such as the oryx, springbok and zebra.

The trip takes about 4 hours to drive if you leave from Swakopmund. Take the drive early in the morning or late in the afternoon, these are the best times to spot animals as they are active around those times, and the temperature is more pleasant as well.

In countless places you can pitch in your tent in the desert. It can be done alone or with a group. Be careful with the wild animals that come here.

Almost everywhere you have the chance to enjoy the  extremely clear sky, the light of the full moon or a terrifying darkness. Do bring your own food and drink, because often there are few or no facilities.

Many people travel to the Namib-Naukluft National Park in organised groups, but you can also hire a car and make your own way around. Go prepared with food, drinks and gas. You'll have the time of your life.

The Namib Desert is considered to be a landscape park. If you’re into landscapes, the best time to visit is in winter. The temperature between April to late October is around 25 degrees Celsius. The wind comes from the east, which can still be really warm. It does get much cooler at night.

You can encounter animals here any time of year, though you’re more likely to spot them near the few remaining water holes in summer.

History of the Namib Desert

Namibia means ‘vast place’, an apt description for this huge landscape. The Namib Desert is around 100 kilometres wide, and it curls up the coast of Namibia like a snake. It’s an immense area where space and quiet rule everything. It’s one of the few deserts in the world that literally ends in the sea.

Scientists believe that the Namib is 55 million years old, though some even believe this sandpit is 120 million years old. The wind is the sculptor here, and the typical red dunes are the highest in the world. The entire area is filled with contrasts. It’s a desert, but it’s also home to the highest mountain in Namibia. The Brandberg is 2.573 metres high and in the north-west of the Namib desert.

This area seems quite uninhabitable for humans. Though along the edge of the desert there have been discoveries of numerous forms of rock art by the San people, who have lived in the area for centuries. The rock art is incredibly special, most of it is drawn on rocks, and in parts it’s carved into the rock, it’s likely they used quarts as a carving tool.

The capital Windhoek is the starting point for most tourists. This city is easy accessible. From Windhoek you have several options.

There are various buses to Namib-Naukluft, for example, but most travelers start their tour here with a group or rent a car.

From Swakopmund you can drive to the more southerly situated Walvis Bay. And the only entrance in the dunes themselves is Sossusvlei and the deeper Deadvlei.

Climb Dune 45 in Namib-Naukluft
Dune 45 in Namibia might be the most famous dune in the world. It's 105 metres high, not the highest in the Sossusvlei, but regardless, it's a serious climb up in the sand.
Read more
Etosha National Park

Etosha National Park
The Etosha National Park in Namibia is world famous because of the extreme difference between the seasons and the way the animals behave during those seasons. You can see large groups of different animals here, and how dependent they all are on water.
Read more
Kolmanskop

Kolmanskop
Kolmanskop is a true ghost town in the middle of Namibia. Once diamonds were found here, but that was a long time ago. When you visit Kolmanskop you can see how nature is slowly taking the town back.
Read more
Ride a quad in the Namib desert

Ride a quad in the Namib desert

Ride a quad in the Namib desert
a large part of the Namib desert is made up of ‘living’ dunes, where the tracks you leave behind are cleared away nearly immediately by the wind. Your guide will show you how to ride your quad up a dune. And, more terrifyingly, how to ride down one.
Read more
Sossusvlei

Sossusvlei
The Sossusvlei in Namibia is an incredibly piece of art by Mother Nature. It's a snow-white salt pan, surrounded by bright red dunes and generally covered by a blue sky.
Read more
The Himba

The Himba
The colourful Himba people live in a very dry and inhospitable area in Namibia. A visit to the Himba can be a highlight of your trip.
Read more

all 16 articles on Namibia