Salt pans, waterholes and wildlife in the middle of Namibia 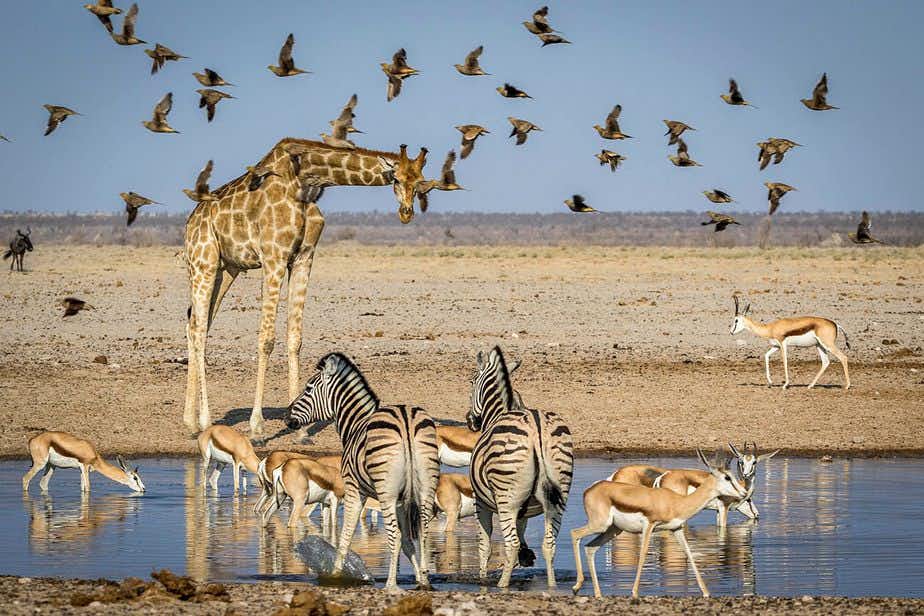 The Etosha National Park in Namibia is world famous because of the extreme difference between the seasons and the way the animals behave during those seasons. You can see large groups of different animals here, and how dependent they all are on water.

Etosha National Park gained fame through nature documentaries on channels such as National Geographic. They show how hard life can be through the different seasons in a year. The dry time is an annual challenge. On top of that, wealthy westerners have shot nearly all its wildlife.

Etosha isn’t like other nature parks. In the dry season all the trees, shrubs and grass are dried out, it’s extremely dusty and the ‘survival of the fittest’ is a reality. All life happens around the different waterholes in the area. But in the wet season, al is green, there’s a wealth of food and many animals have their young. Two seasons: two extremes.

Safari in a rental car

You can take a safari in a rented four-wheel-drive in the Namib desert, and Etosha National Park. It gives you a lot of freedom to do as you please: choose your own route, head out at the crack of dawn, and stop where you want to.

But you won’t have the trained eye of the guides, drivers and spotters who can point out the wildlife. Luckily, you’ll often be alerted there’s something to see when you see a few cars stopped along the road. The gates of the park open at sunrise, so you can get there very early, especially if you’re staying at one of the lodges or campsites in the park.

Especially in the dry season the waterholes play an important role in the park. The animals come here for a drink and stay in the area. Until a predator shows up, of course. When you visit Etosha there are roughly two ways to go about your adventure.

You can drive from waterhole to waterhole, or stay at a waterhole for a long time and see who comes for a drink. The best things if you’ve got the time is to do both, of course. There are many waterholes, large and small, throughout the entire park.

Camp in a four-wheel-drive with a roof tent

Camp in a four-wheel-drive with a roof tent in Etosha National Park.

If you’d like absolute freedom when you’re traveling around Namibia, you should hire an all-terrain car with a roof tent. You can open the tent and spend the night in one of the campsites in Etosha National Park.

There are three tourist camps in the park: Okaukuejo (in the south), Namutoni (in the east) and Halali (in the middle). Each camp has a shop, a restaurant, accommodation (usually a lodge) and several campsites. In the wet season it’s not that hard to find a place to stay, but in the high season (northern hemisphere summer) it can be very tricky, even at the campsites.

The campsites are fenced so you’re safe from the wildlife, but you’ll still hear them nearby. This kind of camping has one major advantage. It allows you to head out early in the morning.

Stay overnight in a lodge

The lodges at Etosha often have special rooms near a waterhole. One of those is the popular Okaukuejo, where some rooms have a view of a drinking spot that the animals like to frequent. If you’d like to see the animals drinking in the evening, it’s worth asking which rooms have these views when you book. These rooms are more expensive and very popular, but definitely worth it.

You are not allowed to go on night safari in Etosha. This is partially to ensure the animals get their ‘human free time’, but the neighbouring Ongava Game Reserve has night safaris. This is because they restrict the number of daytime visitors.

So if you’re interested in knowing what kind of animal is out and about at night, you should definitely give it a try. You have book accommodation in a room or tent to do so, which is quite expensive, but it does include all meals and daytime safaris as well.

The Etosha Lookout is in the middle of the salt pan of Etosha. This is the only place where you can actually be on a salt pan, and you have to walk along it for several hundred metres to get to the viewing area. It’s a bizarre view that’s hard to describe. It’s white all around because of the salt, and that’s why there are very few animals and therefore safe to leave your car.

These elephants are by far the most famous animals of the park. Biologists say they are the largest elephants in Africa, though it’s not clear why they are so large. The African elephant is the largest land creature on earth, and it’s an impressive sight to see a herd of them. Especially in comparison to other animals at waterhole.

They have to drink very regularly, so it’s likely you’ll see them. Because the white dust settles on them, they are known as white elephants or ghost elephants. But if you’re lucky you might see them take a bath to wash the dust off their backs.

Etosha might not have the usual Big Five, but it does have a Predator Big Five: Lion, leopard, cheetah, spotted hyena and the black-backed jackal. The lion and the jackals are the most spotted out of all of them. The other ones are not seen as often, but if you’re there for several days you have a chance to see them.

The Fairy Tale Forest near Okaukuejo is a special place in Etosha. Here are a few hundred moringa trees (moringa oleifera), which normally only grow on mountain slopes and hills, but Etosha is the only place where they grow on plains.

Normally they have quite straight trunks, but here they have quite awkward shapes thanks to the elephants and giraffes who like to eat them. It’s a quiet place, and great for taking unique photos.

Etosha isn’t like other nature parks. In the dry season all the trees, shrubs and grass are dried out, it’s extremely dusty and the ‘survival of the fittest’ is a reality. All life happens around the different waterholes in the area. But in the wet season, al is green, there’s a wealth of food and many animals have their young. Two seasons: two extremes.

Etosha means ‘great white place’. Almost a quarter of the area is made up of salt pans, surrounded by dry bushland, shrubs with very long thorns. They are mostly mopane (colophospermum mopane) and red bushwillow (combretum apiculatum).

The documentaries give an accurate impression: all animals that live here depend on the availability of water. In the dry season they hanker for rain, just as the shrubs and plants.

Etosha National Park is one of the oldest parks in Africa. It was founded in 1907, after the war between the Germans and the Herero people. The area became protected to ensure that the rich natural area wasn’t entirely robbed of its wildlife by western hunters.

When the park was founded, there were barely any animals left. Slowly, the number of animal is increasing. As do the number of visitors. Thankfully the only shooting they do these days is with a camera.

The park is currently around 22.270 km2 in size, though it was originally around 100.000km2. Back in 1945, Namibia was a province of South Africa. And when Apartheid finished, large parts of land were returned to the original peoples who inhabited them, such as the Herrero and Damara.

Each animal in Etosha NP has its own survival strategies. Herbivores such as zebras and wildebeest won’t go for a drink in the middle of the night, simply because they can’t see very well and predators are likely to strike. So they drink during the day.

Predators, on the other hand, use the cloak of darkness to hunt. They are likely to sleep during the day, though the can be spotted at a waterhole as well. It can get quite busy at the waterholes. There is a certain hierarchy here, often decided by numbers.

What’s special about Etosha is the number of animals you can spot here: zebras, wildebeest, and different kinds of antelopes. Manmade waterholes help them survive the dry season.

You won’t find the famous Big Five of safari animals at Etosha NP, though people often expect to find them here. The African buffalo doesn’t live here, because they need too much water to survive. But you can find the lion, African elephant, leopard and the white (and black) rhinos. With an exception to the rhinos, these animals are spotted here quite regularly.

Originally, the San people lived in the Etosha salt pan. You can still see some remains. But they were driven out many years ago, the last of them in 1954.

Climb Dune 45 in Namib-Naukluft
Dune 45 in Namibia might be the most famous dune in the world. It's 105 metres high, not the highest in the Sossusvlei, but regardless, it's a serious climb up in the sand.
Read more
Kolmanskop

Kolmanskop
Kolmanskop is a true ghost town in the middle of Namibia. Once diamonds were found here, but that was a long time ago. When you visit Kolmanskop you can see how nature is slowly taking the town back.
Read more
Namib-Naukluft National Park

Namib-Naukluft National Park
Naukluft Namib National Park encompasses much of the Namib Desert. This national park is home to the most important and most beautiful part. You can easily visit this nature reserve in the west of Namibia.
Read more
Ride a quad in the Namib desert

Ride a quad in the Namib desert

Ride a quad in the Namib desert
a large part of the Namib desert is made up of ‘living’ dunes, where the tracks you leave behind are cleared away nearly immediately by the wind. Your guide will show you how to ride your quad up a dune. And, more terrifyingly, how to ride down one.
Read more
Sossusvlei

Sossusvlei
The Sossusvlei in Namibia is an incredibly piece of art by Mother Nature. It's a snow-white salt pan, surrounded by bright red dunes and generally covered by a blue sky.
Read more
The Himba

The Himba
The colourful Himba people live in a very dry and inhospitable area in Namibia. A visit to the Himba can be a highlight of your trip.
Read more

all 16 articles on Namibia