Castel Sant'Angelo in Rome: Museum with a unique view

The world-famous Mausoleum of Hadrian, which was also used by popes as a fortress 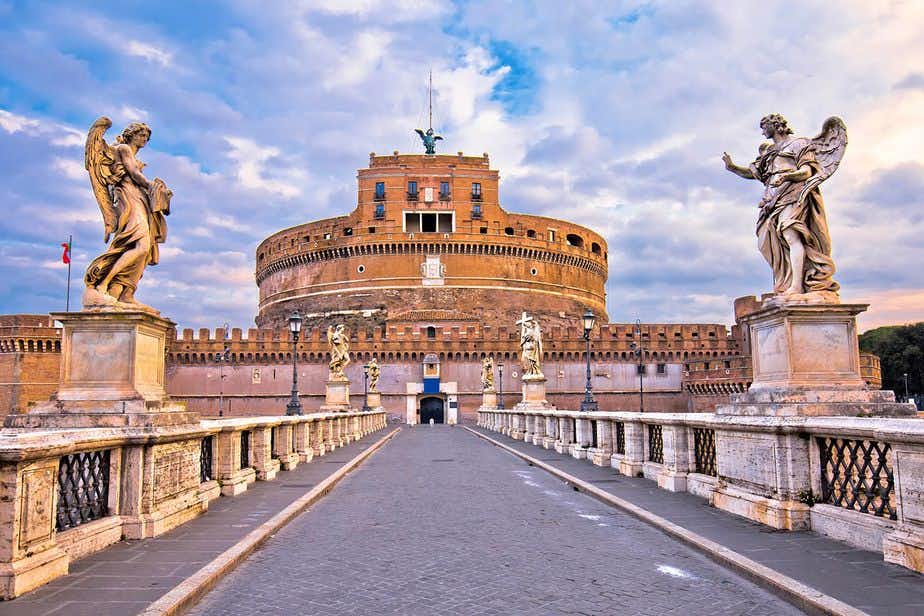 Originally the Castel Sant’Angelo (also known as Castle of the Holy Angel) was commissioned by the Roman Emperor Hadrian as a mausoleum for him and his family. It was once the tallest building in Rome.

It was built as a mausoleum , but it has also served as a prison and a refuge for popes. The museum has 58 rooms taking you right back into the past. Once it was the tallest building in Rome, so climb to the terrace for a great view of Rome.

At the beginning of the 14th century, the popes converted the building into a fortress. The building was connected to St Peter’s Basilica with a secret passageway. Later on, it was also used as a prison. Nowadays it is a museum.

The Ponte Sant’Angelo was built at the same time as the mausoleum. On both sides of the bridge, you will find 10 angels sculptured by Gian Lorenzo Bernini. These statues were added in 1669 during reconstruction. Each of them bears an item referring to the Passion of Christ.

One of the best views of Rome

Are you not afraid of heights? Then visit the terrace for a surprising view of Rome.

Read My Tips
Garda by Bike

Garda by Bike
Garda by Bike is a new cycle path along Lake Garda in Italy. It will open after the summer of 2021 as the last parts of the cycle route are currently being completed. The most special part is where the path lingers as wooden pieces along the rocks. Here you have the feeling of the path floats in the air.
Read more
Gargano National Park

Lake Iseo
Lake Iseo in Italy is very popular with Italians. Lake Iseo is 25 kilometers long and more than 4 kilometers wide. It is not nearly as touristy as the other large lakes, and it is typically Italian. South of Lake Iseo is a well-known wine region: Franciacorta. The island of Monte Isola is also special, which is the largest island in a lake in Italy. You can easily explore the lake, villages and mountains.
Read more
Pantheon in Rome

Pantheon in Rome
The Pantheon is one of the must-visits in the center of Rome. It has the largest unreinforced concrete dome in the world. And with a central opening (oculus) with a diameter of 8.7 meters to the sky, which is its only light source.
Read more
Siena

Siena
Siena is a medieval town in Tuscany. On its main square, the Piazza del Campo, there are famous horse races twice a year, on July 2nd and August 16th. But every other day of the year you can enjoy la dolce vita (the good life) here on one of its many terraces.
Read more
Sky Pool: unique infinity pool in the Dolomites

all 25 articles on Italy