Possibly the most beautiful castle in Germany 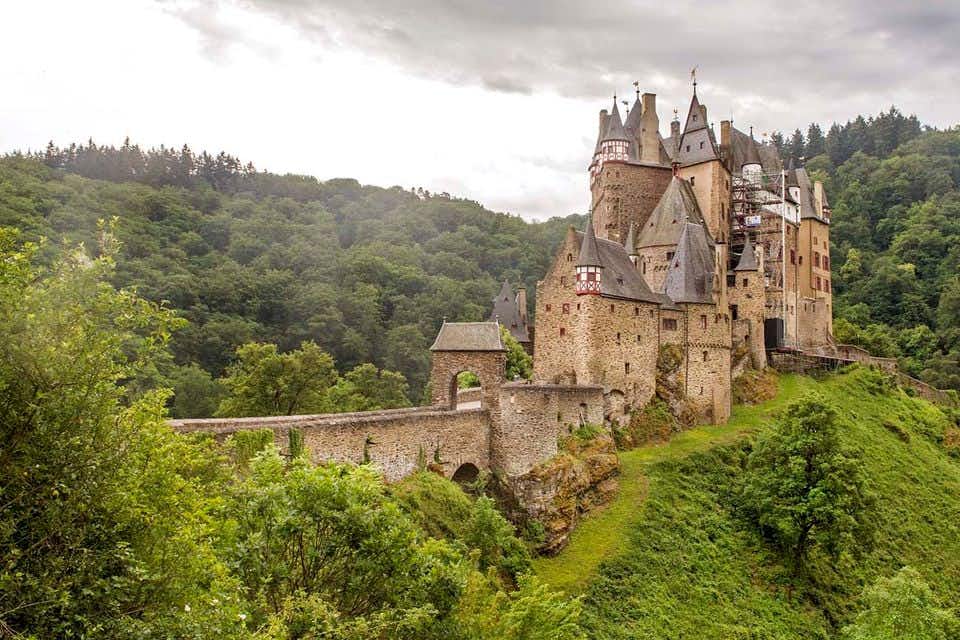 Eltz Castle, is also locally known as Burg Eltz, is a famous castle in Germany. It is a typical German knight’s castle, which is in a remarkably good condition. Eltz Castle is located in Wierschem in a valley in the Moselle.

Social media has increased Eltz Castle’s popularity. However, it has been famous since the Middle Ages. The eight residential towers give the castle a fairytale character.

The castle is divided into three parts. As three families once lived here. Today, a count and countess still live in a section of the castle. Eltz Castle is private property, and not all sections can be visited. However, there are guided tours to some of the most interesting rooms.

Eltz Castle is located on a rock in the middle of a valley. The rock itself is about 70 meters high. It is relatively steep, which made the castle exceptionally difficult to attack. The Elzbach river flows around it. The uniqueness of the castle is that it endured all wars. As a result of which the architecture has remained the same. Which is quite unique in Western Europe. These are the best attractions of Eltz Castle.

Bridge to the castle

The bridge to the castle is a popular photo and video stop. You can take perfect photos from this point. When you walk up you can see the bridge from afar. The cobble stones on the bridge are very smooth. It is good to stop for a moment to take photos.

The inside of Burg Eltz.

The Rübenach House dates from 1472. It is finished in a late Gothic style, which makes it very striking. The entrance is now the Armoury.

The Armoury is remarkably large, and has numerous weapons from different decades. These have been used to protect the castle. Weapons used for stabbing, but also percussion weapons and rifles dating back to the 14th to the 17th century. Some objects were for decoration. The castle claims to have the oldest cannons in the world.

The Rübenacher Lower Hall served as a living space for the Eltz-Rübenach family. It was built in 1311 and is still in good condition. On the wall, you can see the famous painting of Madonna with child and wine grapes, a masterpiece by Lucas Cranach the Elder.

The Rübenacher Bed Chamber has a Burgundian appearance. Especially through the murals. Take note of the Gothic chapel and the colourful stained glass windows. The celestial scenery is beautiful, which is why it was also called the bedroom.

The Knights Hall was like a living room for all the residents. As three different families lived in their part of the castle, it was the Knights Hall where they gathered for festivities and discussions. With a heavy oak ceiling and friezes from the 16th century. Here you also see various suits of knights, hence the name.

The Flag Room is very impressive. It dates from 1480 and has numerous vaults. This is made in late Gothic construction. He also served as a chapel, but also as a living room. And later again as a dining room. The colour green predominates here.

According to experts, the Armoury and Treasury is the crown jewel of Eltz Castle. Here you will find more than 500 museum pieces from the 800-year history of the castle. With a lot of German art made of gold, but also of silver. Many pieces come from Augsburg and Nuremberg.

In addition, you will find countless processed jewellery, but also top quality glass and porcelain. Note the so-called show weapons. Which are functional, but not very handy. You can visit this room independently. You do not need a tour for this. Your admission ticket is sufficient.

The entrance of Eltz Castle.

During a tour of Eltz Castle, you will explore most rooms. These all have a past, which the guide explains to you. The entrance fee includes the tour. As well as a visit to the Treasury. The tour lasts between 30 minutes and 45 minutes. It is often busy at Eltz Castle as well as on the tour. You don’t get too much time.

From the parking lot, you can choose: Walking to the castle or go by taxi by road. I went for a walk through the forest. You can also walk via the road but I wanted to see how the castle is located in its surroundings. The walk by road is shorter; only 800 meters and take about 10 minutes.

But the footpath through the forest is much more interesting. This is 1.3 kilometers long and departs from the parking lot. You walk through the forest until suddenly the castle appears between the trees. Which is perfect for photos.

The famous Eltz Castle Panorama hike is perfect for active people. It takes about four hours. This walk starts at the village house of Wierschem. You will see the famous Moselle plateau and walk slowly uphill. Soon the valley of Elbbachtal and another castle pass by. This is the medieval castle Pyrmont.

Then some rocks and the winding stream of Elzbach river follow. Until Eltz Castle shows up. You can visit this castle as well, after which the path goes back into the woods. The Ringelstein mill is worth a stop. You go up again with various views. Until you get back to the village. If you have the time, this is the best hike to do.

Burg Eltz has become very popular in recent years. Especially as this location has become very Instagrammable and popular on other social media platforms like Tiktok. This means that it can get very busy. It is best to avoid weekends and school holidays. But even then it can get busy. If you want to be sure of a quiet moment, you have to visit before 10h00.

Then you can also experience the morning mist hanging over the field and the trees. It is also good in the late afternoon. I chose the afternoon, even though I had to wait regularly for people to pass. So I could take a clean shot. Or go in the evening, although you can no longer do the tour. But for photos it is optimal.

According to archaeologists, a donjon, or a fortified residential tower, was built on this point in the 9th century. This was expanded and strengthened over the centuries. The castle was on a popular trade route between the Moselle and the Eifel region.

The castle was owned by the Eltz family. But in 1268, after years of struggle, the castle was divided among the family. Where the Kempenich family got a share, just like the Rodendorf and Rübenbach family. They lived separately, yet communally. And they worked together, especially on threats.

The Kempenisch family became the owner of the entire castle in 1815. Various restorations were made afterward. Although these are minimal compared to many other castles in Europe.

Alexanderplatz
The Alexanderplatz is a famous city square in Berlin, known by the locals as Alex. Where you can still see enough traces from the rich past. Including many from the Cold War, but also plenty of beautiful things you will find here.
Read more
Berlin