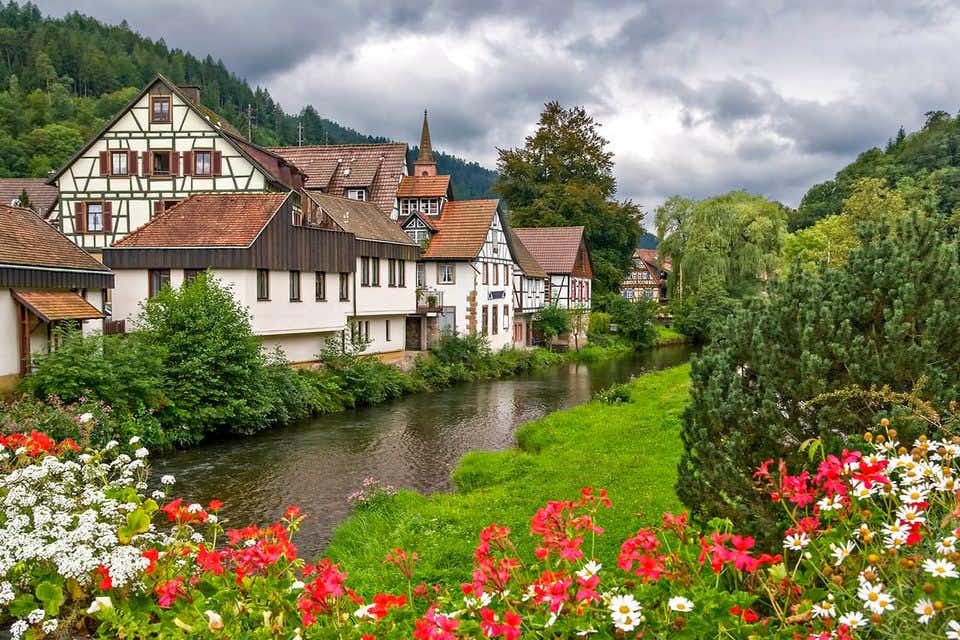 Most people would know the Black Forest in Germany as the setting of many fairy tales written by the Brothers Grimm, but these days it’s a much-loved destination for nature lovers, walkers and cyclists.

This region is also the source of the Danube, although it is not entirely clear where it begins exactly. As a result, there is still discussion about it. But you can discover this yourself, because this is an area with a striking amount of water.

The Black Forest is world famous; this nature reserve is ideal for walking, cycling or to enjoy nature. With mountains, rivers, waterfalls, gorges and much more. Oh and delicious Schwarzwalder Kirsch: a cherry pie with chocolate cake, whipped cream, cherries and Kirschwasser. These are the most beautiful sights for the Black Forest.

The Todtnau Waterfall is one of the most beautiful in Germany. The water falls 97 meters down. You can easily visit the waterfall. There and several hiking paths to follow the river.

The beauty of the Wutach Gorge. ©Corno van den Berg

The Wutach Gorge is Germany's largest gorge. The Wutach river has eroded the landscape for centuries. This natural gorge is a nice walking area with waterfalls and cliffs, and also perfect for photos. So take your time and enjoy some of the hiking paths.

The town of Schiltach in the Black Forest.

The town of Schiltach is very picturesque. It is a wonderful place to stroll through the historic center. Of course you can also spend the night and use this village as a base for your visit to the Black Forest. It is centrally located and you will also find many restaurants and bars here.

A few of the most impressive half-timbered houses are the Town Hall and the Market Square. The bridge over the Schiltach river is also beautiful.

The highest peak in the Black Forest is Feldberg with a height of 1,493 meters. The top of the mountain has no trees and is ideal for hiking. According to several scientists, the rainwater on the mountain is the real source of the Danube.

The Feldsee is a mountain lake in the Black Forest. ©Corno van den Berg

Halfway up the mountain is the Feldsee, which collects water from the mountain. You can easily walk to it. Ask on the spot how from the Feldberg to the Feldsee. This is a wonderful walk, and you can even swim in it if you want. The water might be a bit chilly, but in summer it is very pleasant.

The immense Saint Blaise Abbey is the highlight of St. Blasien. This former church has an impressive facade. It is also one of the largest domes in Europe.

The stunning Triberg Waterfalls in the Black Forest.

The Triberg Waterfalls are among the highest in Germany. The waterfall is 163 meter high and has 7 drops. According to many visitors, the third drop is the most impressive, while the fourth is the most beautiful. But you can decide for yourself which one you like best.

You can enjoy a 2.5 kilometre Hiking path. You'll cross the most beautiful parts. The most striking are the granite cliffs where the water falls in between. The water comes from the nearby Gutach river.

It is also home to the Black Forest Museum. You can learn everything about the forest area, the wildlife and more. The Waterfalls are in the village of Triberg in the southern part of the Black Forest.

Largest cuckoo clock in the world

The largest cuckoo clock in the world is also located in Triberg. Much of a cuckoo clock has been recreated here on a scale of 60: 1. Making it the largest in the world. Which you can view. In the park you can see even more, including the smallest. This one is only 13.5 centimeters and still works.

The traditional houses in Gengenbach

Gengenbach is one of the most pleasant towns in the Black Forest. Here you will find numerous half-timbered houses in the historic old town. You can also visit the Narrenmuseum Niggelturm. Where you can learn everything about the jesters you see here with names around Fastnacht.

Fastnacht: The Carnival of the Black Forest

People dressed up for Fastnacht.

The annual Black Forest carnival is called Fastnacht. And it is slightly different from the carnival here. The residents walk around in a parade like witches, jesters or animals from the forest. While calling Narri Narro. So you have to respond with Narro.

Although it is becoming more and more common to simply dress up lavishly. The parade is interesting to watch. There is also a city festival with performances and music. As it should be, it is organised in February.

In 2014, a large part of the area was declared a national park. Giving it extra protection. This means, among other things, that hunting is prohibited in some areas. While in other places the construction of houses is limited. Just like logging, for example.

A striking number of special wild animals such as wolf, fox, wild boar, wild cats and European lynx live in this nature reserve. This makes it an important nature reserve for Europe. However, wolf, wild cat and lynx are rarely seen. The fox and wild boar are more common, as are roe deer.

It is now mainly a place for hikers, nature lovers and cyclists. The immense nature reserve is located in the southwest of Germany, in the state of Baden-Württemberg, on the Rhine and the French border.

Eltz Castle
Eltz Castle, is also locally known as Burg Eltz, is a famous castle in Germany. It is a typical German knight’s castle, which is in a remarkably good condition. Eltz Castle is located in Wierschem in a valley in the Moselle.
Read more
Pergamon Museum