Berlin Cathedral: Tips for the most beautiful church in Berlin

One of the most important churches in Berlin 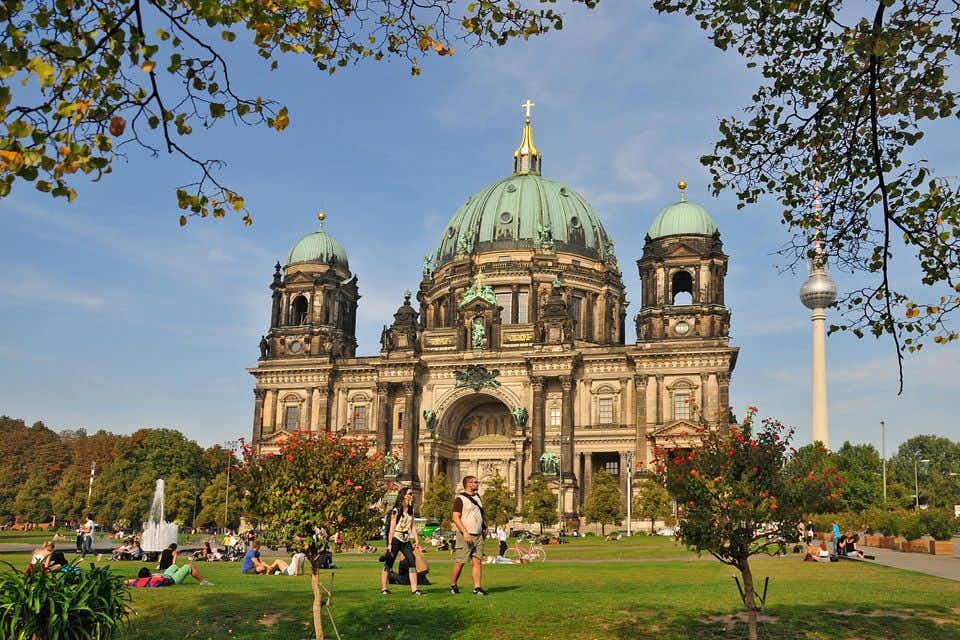 The Berlin Cathedral with its famous Sauer organ is one of the most important churches of Berlin. It’s beautifully positioned along Unter den Linden, with a large grassy field at its feet where you spend a lazy afternoon on a sunny day.

History of the Berlin Cathedral

The current Berliner Dom is not the original church. There used to be a baroque cathedral from 1747, but this was destroyed on command of emperor Wilhelm II. The current cathedral was built between 1895 and 1905, and was heavily damaged during the second world war.

Reconstruction started in 1975 and the church officially re-opened in 1992. During its restoration, the decision was made to make the church simpler and less high. The architect, Julius Raschdorff, decided on a baroque structure with renaissance influences. He did make sure that the interior of the church was decorated with rich mosaics.

Its organ, known as the Sauerorgel, or Hauptorgel Berliner Dom, is world famous. It has 113 stops, including three ranks of 32′ pipes on the pedal division.

The church is also famous for its crypt, which holds many sarcophagi. Members of the House of Hohenzollern are buried here, a dynasty of former princes, electors, kings and emperors that used to use this church as their royal church. King Frederic I and his wife Charlotte, amongst others, are in sarcophagi here.

How do I get there?

The Berlin Cathedral is located at the Museumsingel, across from the former Palast der Republik, near the street called Unter den Linden.

Bastei Bridge
The Bastei Bridge in Germany is more than 200 years old. The bridge is very popular with photographers and hikers. What you will notice for yourself when you get there. This is a very photogenic place and well worth the hike.
Read more
Berlin

Berlin
Berlin has a wonderfully relaxed atmosphere. It's typically German, but not always. You can easily discover the city on your own. There are plenty of museums, restaurants and bars to try.
Read more
Eltz Castle

Eltz Castle
Eltz Castle, is also locally known as Burg Eltz, is a famous castle in Germany. It is a typical German knight’s castle, which is in a remarkably good condition. Eltz Castle is located in Wierschem in a valley in the Moselle.
Read more
Geierlay Suspension Bridge

Geierlay Suspension Bridge
The Geierlay in Germany is a pedestrian bridge that spans 360 metres between the hills of the Hunsrück mountains. It’s about 100 metres above the ground, and was opened in 2015 and has become very popular since then.
Read more
Pergamon Museum