Hunting tour with the San people or Bushmen - AmazingPlaces.com

Hunt with the San people (Bushmen)

Unique and raw experience in the Kalahari 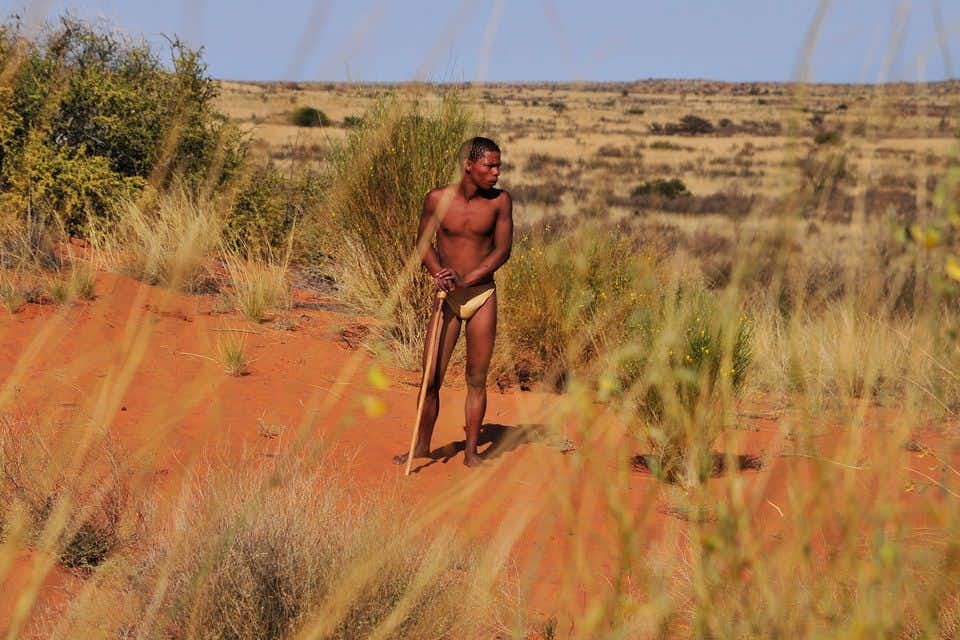 The San people are believed to be the ancestors of all humans. Once upon a time these hunters lived all throughout the south of Africa, but now they mostly live in the Kalahari Desert. Unfortunately, much of their culture has been lost.

The San people (also known as Bushmen) are considered to be the oldest of all humankind. Scientists believe that there were humanoids who lived in this area of Africa around 500.000 years ago. Their descendants, the San people, have lived here for around 25.000 years.

Home of the San in the Kalahari. ©Corno van den Berg

Not an every day trip

This is not a tourist day trip. But if you want to join the San people (also known as Bushmen) for a hunting trip, you can. In the early morning they head off into the Kalahari and demonstrate their knowledge of the animal kingdom. It can be rather confronting, as they catch the animals that we go on safari to see.

Heading out with the San. ©Corno van den Berg

They mainly live off hunting with bow and arrow, of which they dip the tip into poison. They also gather fruits, tubers and roots of specific plants. They knowledge of the area, the seasons, the plants and the animal behaviour is unrivalled. The arrival of white settlers had a devastating effect on the San, as they brought European diseases into Africa which had serious effects on the San people’s health.

The settlers displaced the San people, taking the land on which they had been living for centuries. And they introduced the San to alcohol. Their numbers have dwindled substantially, there are only a few groups left.

The Central Kalahari Game Reserve is one of the few places where the San people can still live. But many have been driven out by the government. Their hunting licences have been withdrawn and water pumps have been destroyed. This has happened under the pretence that the government wants a better lifestyle for the San people, forcing the semi-nomadic people to live in villages with water and electricity.

Human rights activists believe the San are being displaced not to improve their lifestyle, but due to the interest in mining on their ancestral lands. The area is particularly rich in diamonds.

You can meet the San in several locations, but one of the best places is the bij Xaus Lodge in the South-African part of the Kalahari. So why not go on an adventure with the San and make up your own mind.