Manta Ray: Best places to see this animal in the wild - AmazingPlaces.com

These large rays are called butterfly of the sea 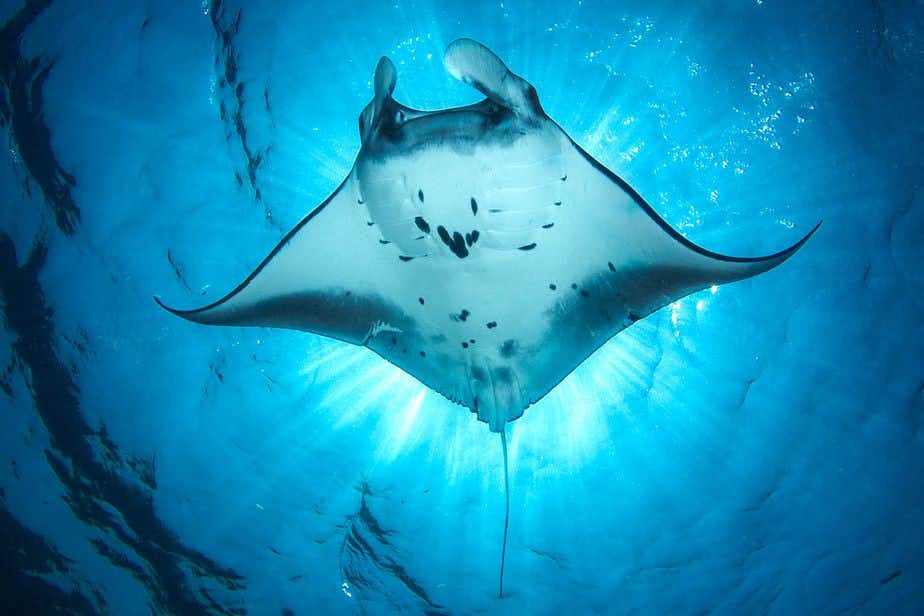 The manta ray is an imposing appearance in the water. These graceful animals can grow up to seven meters long and almost fly through the water. Manta rays are at the top of the wish list of many divers and snorkelers, along with the whale shark.

The manta ray is the largest ray in the world. The animal is also called manta ray. Which, including tail, can reach more than 7 meters in length and more than three meters wide. These animals fly like birds, but underwater. Which makes a meeting special. And especially beautiful, when you realise that it is a special way of moving. The Latin name is manta birostris.

What does a manta ray eat?

Those animals are remarkably large, but their food is not. The menu consists mainly of tiny plankton, but also small fish. Which they fish for while swimming. Usually they do this with their mouths open.

You have two options for seeing manta rays. This can be done on a diving or snorkeling excursion where you have to be lucky. Although there are plenty of places where you have a good chance.

Special excursions are organised at various places to spot manta rays. I saw them in Hawaii on a special evening excursion. Where they gracefully make circles to bring in as much plankton as possible.

Scientists now know that there are various types of manta rays. Who also exhibit different behaviour. And also, for example, traveling around a lot, or not. But further research is needed.

Belize Barrier Reef
The Belize Barrier Reef is Belize's crown jewel. This vast coral reef is simply beautiful, with crystal clear waters and an incredibly rich marine life. You can visit it on different tours or on you own.
Read more
Bora Bora

Bora Bora
Bora Bora, one of the islands of French Polynesia, is for many the ultimate paradise. The island is very green, has golden beaches and crystal clear waters. It’s an ideal destination for sunbathing, but also for snorkeling and diving. Guaranteed you will have shark, ray and turtle encounters.
Read more
Cozumel

Cozumel
The island of Cozumel is off the coast of Mexico. It's a much-loved destination for sun lovers, divers and snorkel lovers. Besides its many beaches and coral reefs, you'll also find historic sites of the Maya and Toltec peoples.
Read more
Galápagos Islands

Galápagos Islands
The Galapagos Islands in Ecuador is a must if you're a nature lover. Just as natural scientist Charles Darwin did centuries ago, which led him to his famous theory of evolution. Darwin put the special volcanic islands on the map. Nowadays remarkable animals keep on doing it.
Read more
Great Barrier Reef

Great Barrier Reef
The Great Barrier Reef in Australia is unique in the world. Scientists affectionately call it the largest organism on Earth. This immense coral reef is perfect for snorkelling and diving tours, with an unprecedented number of animals that you can encounter. It is 2,300 km long and 500,000 years old. Where also countless islands can be found.
Read more
Hanifaru Bay