It’s the largest organism on the planet 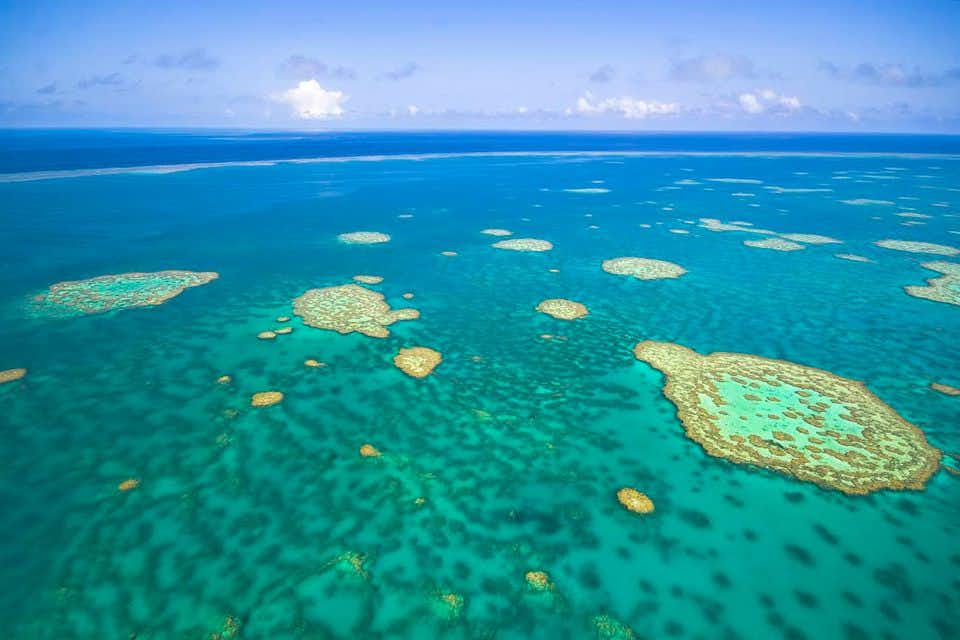 The Great Barrier Reef in Australia is unique in the world. Scientists affectionately call it the largest organism on Earth. This immense coral reef is perfect for snorkelling and diving tours, with an unprecedented number of animals that you can encounter. It is 2,300 km long and 500,000 years old. Where also countless islands can be found.

The bright colours of this more than 2,300 kilometers long coral reef are even seen by astronauts from the moon. The corals, sand and clear water create an unparalleled play of colours.

It starts along the south of the Queensland coast in Australia, and stretches all the way to the southernmost tip of Papua New Guinea. With plenty of islands and atolls (ring-shaped island of coral with water in the middle). Some island are inhabited.

To date, scientists have discovered more than 1.900 kinds of fish around this huge coral reef, but they are only the tip of the iceberg. The number of molluscs is even greater, around 4.000. Sea turtles are spotted regularly on the reef, six out of the seven kinds in the world are sighted here by tourists. Coral reefs are also loved by dolphins, and sharks can be seen around reefs as well. Even whales have been known to migrate along the reef sometimes.

Marine flora, such as algae, is the main food source for many creatures that live around the reef. There are around 600 kinds of algae around the Great Barrier Reef, though you wouldn’t be able to spot them easily with the naked eye. There are also 14 kinds of seagrass here, two of which are only found here. Seagrass is a relatively young species compared to algae: according to scientists seagrass has been around for about 70 million years, whereas algae has been around for two billion years.

One of the beaches of the Great Barrier Reef.

Snorkelling on the Great Barrier Reef

Many visitors come to the coral reef for a day. Which is actually a shame. You only get a glimpse of all the natural beauty. Most tours depart from Cairns or Port Douglas. The latter is better regarded because of the greater diversity of what you get to see.
You depart from the ports for a day with various stops along the way. You also have to sail, so you have a chance of seeing dolphins and other animals. The downside is that you are with a lot of other people, and even though there are several places to snorkel it feels crowded.
It is better to take several days for the largest coral reef in the world. You can spend the night on various islands and make excursions from there. Where you can draw your own plan much more. You can also walk on beaches and more.

Snorkelling on the Great Barrier Reef.

Diving at the Great Barrier Reef

Divers sometimes opt for just a day on this coral reef. Better to book several days. For example, where you spend the night on the boat. Liveaboard diving is very popular. And rightly so, because each place is known for its own species that you can see. Where you can spot sharks, rays and countless special fish in a week.

For most people, coral reefs are all equal. But an experienced diver or a nature lover knows the differences. For example, the Great Barrier Reef has four types of dive sites:

A diver at the Great Barrier Reef.

Most diving operators offer night dives on the reef. Besides the different light by which you’ll dive, you’ll also see different kinds of creatures.If you’ve got a diving course that goes for several days you’ll likely go on a night dive, but you can also book them separately.

Watch the reproduction of coral

The third week of November (or thereabouts) an extraordinary thing happens at the Great Barrier Reef: if the conditions are right the coral reproduces en masse with a huge explosion as a result. Because there is no set date, it’s best to have a bit of margin in your travel itinerary, and you should be up for night diving.

The view from the helicopter on the Great Barrier Reef.

You can take a flight in a helicopter to see the Great Barrier Reef. Only from the air you can see how unprecedentedly large the coral reef is. It's an expensive excursion, but totally worth it. You can book this excursion in Port Douglas and also in Cairns.

Sleep on a boat or ship at sea

Have you ever wanted to sleep over the Great Barrier Reef? That can be done in different ways. Stay overnight on a sailing boat or a catamaran, where you have the coral reef to yourself. When all the tourists are gone; peace returns. What could be better than watching the setting sun play with the elements in a colour battle? These excursions are very suitable for a (guided) diving or snorkelling trip in the dark as well. Ideal for those who want to snorkel or dive for several days.

Spend the night on an island

Sailing tours around the Great Barrier Reef with island stays are very popular, and there are several options. You can take a nice cruisy sail to a guest house on a remote island, for example. Or a tour where you can pitch your tent on a small island. Beautiful sunrises and sunsets are always included in all tours! There are twenty islands with different kinds of accommodation, so there’s something for everyone.

You’ll go about a metre under water in a kind of submarine, with a perfect view through special glass. It’s like a nature documentary, but in real life. There is also a platform out on the ocean with a glass bottom where you can see to the bottom of the ocean and see the divers go past. Perfect for those who cannot, or don’t want to, get wet.

Explore the shallow reef at night

If you prefer not to dive or snorkel at night, you can walk along the shallow reef. One of the most famous places to do this is on Lady Musgrave Island, which is easily reached from a town with the remarkable name of 1770. At night you can put on some special shoes, grab a torch and follow a guide. You’ll see sea cucumbers, and possibly young sharks enjoying the shelter of the bay, after which you can curl up in your tent for the night.

Kayak along the reef

You might not see a lot of the underwater world in a kayak, but you’ll be able to explore everything around it, such as several islands and different animals such as whales, sea turtles and eagles.

People used to think a coral reef was made up out of water plants, but now it’s known that a coral reef is like a giant underwater zoo. Most common are polyps, which in turn are made up out of thousands of tiny animals. They make up the largest part of the reef.

More than 350 kinds of coral have been found along the Great Barrier Reef, an extraordinary amount. The tiny coral creatures have an intimate relationship with the sun. The creatures (that make up a polyp) feed on plankton and algae which like to live in warm, clear and salt water.

It might sound strange, but a coral reef is actually also a giant cemetery. It’s built on the skeletons of thousands of sea creatures, and on top of these remains live other creatures. According to marine biologists the first coral reefs were formed about 500 million years ago.

The predecessor of what we now call coral was formed in the south of Europe around 230 million years ago. The Great Barrier Reef, with its calculated age of 500.000 years is relatively young in comparison. And the oldest coral that can currently be found there is only about 8.000 years old.

How does the coral propagate?

Coral can reproduce in two ways: some coral splits into two to form two separate entities, while other kinds create both sperm and eggs once a year. These float to the surface where the actual fertilisation takes place, after which they are carried away and set down in another location where they attach themselves and grow.