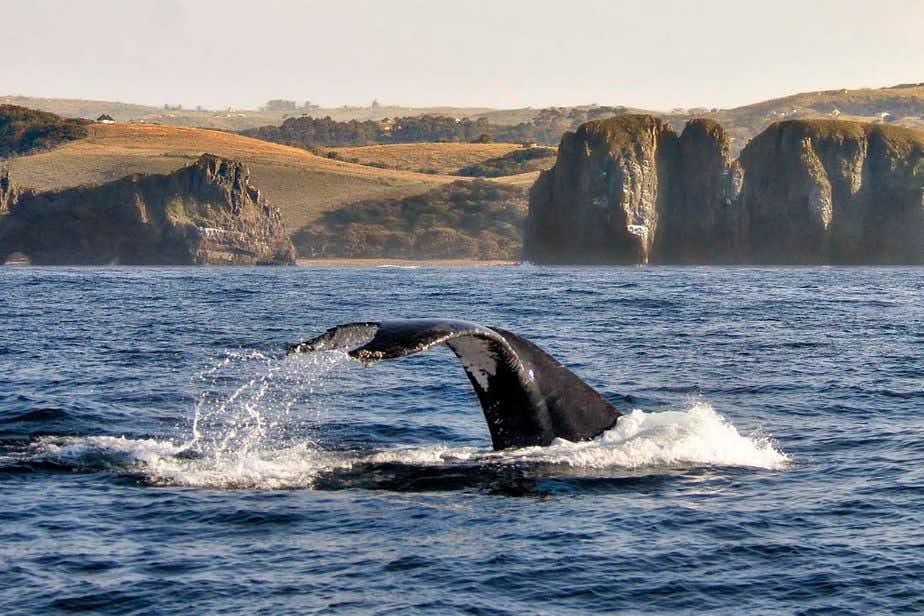 The humpback whale is found in all oceans. And so, with a bit of luck, can be seen all year round. It can be done from the coast, but also during a whale safari. This can be done in various places, usually with success.

These animals can be seen on a whale safari all over the planet. Humpbacks are usually not shy, so you can view them often up close.

How do I recognise a humpback whale?

These animals are easily recognisable by the hump on their back when they dive under water. This is remarkably visible. That is why it used to be called the humpback whale from the whalers. Its stocky build and dark colour are also often striking.

The Latin name is megaptera novaeangliae, which you often hear when you go on a whale safari.

How do I get the best photo of a humpback?

Taking a picture of a humpback whale is not easy. The animals suddenly disappear under water and otherwise come up again. This can take minutes, but also a few seconds. It is best to wait for the animal to dive underwater. Then his tail (almost always) comes completely above the water. And so you can make the famous tail photo.

It is more difficult to zoom in. Better you can set your camera to widescreen and then zoom in on your photo later on the computer. Then you have a great chance to capture the animal. You can shoot in automatic mode, but you can also set your aperture as low as possible and your ISO up. So that you can capture every movement razor-sharp.

Best tips for a whale safari

If you are on a whale safari the guide will give you lots of tips. About where the animal may surface again, so keep your camera at hand. He knows the behaviour of the animals, so he often knows when he dives under water. So that you can proudly show your tail at home.

Azores
The Azores are nine inhabited and eight uninhabited islands that belong to Portugal. They are remote islands, created in the distant past by volcanic activity. In the Azores, you will find a total of 1,766 volcanoes, nine of which are still active. It is a playground for nature lovers.
Read more
Hermanus Whale Watching

Hermanus Whale Watching
Hermanus in South Africa is one of the best places to spot whales. They come here annually in June to rest. You can see them from the coast, or head out on a boat tour.
Read more
Lofoten

Lofoten
The Lofoten in Norway are often voted one of the most beautiful places on earth. National Geographic recently voted it the third most beautiful. When you walk around these islands, you'll understand why.
Read more
Sardine Run on the Wild Coast

Sardine Run on the Wild Coast

Sardine Run on the Wild Coast
The Sardine Run in South Africa is one of the greatest natural spectacles on Earth, But it is relatively unknown. You can witness it on a snorkeling or diving tour. But you need the help of an animal; the dolphin.
Read more
Whale watching around Greenland