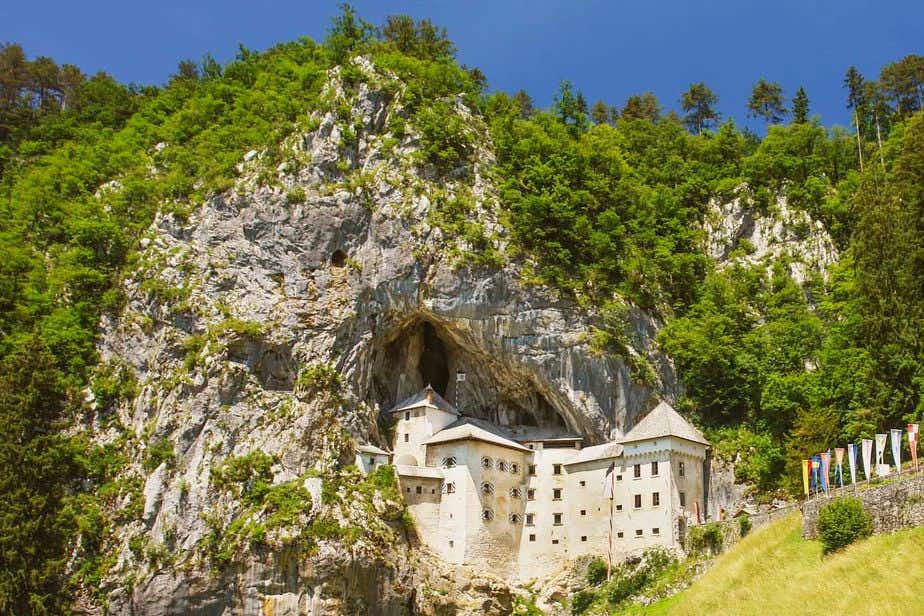 Predjama Castle is a castle built in a cave. The official name is Grad Predjama. It is located near the town of Postojna in the southwest of Slovenia. These are the best tips to visit Predjama Castle.

When you arrive at the castle, it's an imposing sight. A striking white castle is visible in a rock. It seems to have been built both in and in front of the rock. The castle was built in the 12th century. According to scientists, the cave has been inhabited for much longer, possibly even in the Stone Age. The entrance is located at an altitude of 123 meters in the rocks.

On the way to Predjama Castle.

Today, the Castle of Predjama is a museum. It is promoted as the only cave castle in the world that is still fully operational. It is also known as the largest castle in a cave in the world.

You can take a tour, where you get a lot of information about the history. And especially about the people who have lived here. But also about how it was defended when it was attacked.

In addition, you will hear about the colony of bats that live in the cave under the castle that come out in the evenings. Which makes the whole thing even more sinister.

History of Castle of Predjama

The interior of Predjama Castle.

The Knight Erazem is the main character in the stories about Predjama Castle. He is also called the Robin Hood of Slovenia. His full name is Erazem Lueger and he stole from the rich to give it to the poor. But after accidentally killing an employee of the Vienna Court of Justice, he fled to the Castle of Predjama.

But the castle could not be conquered, so it was decided to starve Erazem and his companions. This took over a year. Because under the cave there were countless corridors through which food could be smuggled. But, to date these secret corridors have not been found.

During the tour you will hear how Erazem came to his end. The outdoor toilet was the weakest place of the entire castle. When he was sitting on the toilet, it was bombed, possibly by the betrayal of one of his loved ones. At least according to legend, there are plenty of other stories of how he met his fate.

Guided tour of the Castle

A close look at the Castle of Predjama.

You can order an entrance ticket online for a guided tour. Where you will visit both the castle and the caves. And of course listen to the stories about Erazem, but also get to hear about the last private owners. The Windisch-Graetz family got their hands on it in 1846. After the Second World War, it was nationalized and became a museum.

Combination with Caves of Postojna

You can combine a visit well with the nearby Caves of Postojna. You can buy an entrance ticket for both, online. This is a lot cheaper than single tickets.

Lake Bled
Lake Bled is one of the absolute attractions of Slovenia. Even in bad weather, it's like a postcard. The lake is 2,120 m long and 1,380 m wide, it has a maximum depth of 30.6 m. Lake Bled is surrounded by hills and the Julian Alps.
Read more
Show all articles