Until recently a remarkable hole in the limestone cliffs of Malta 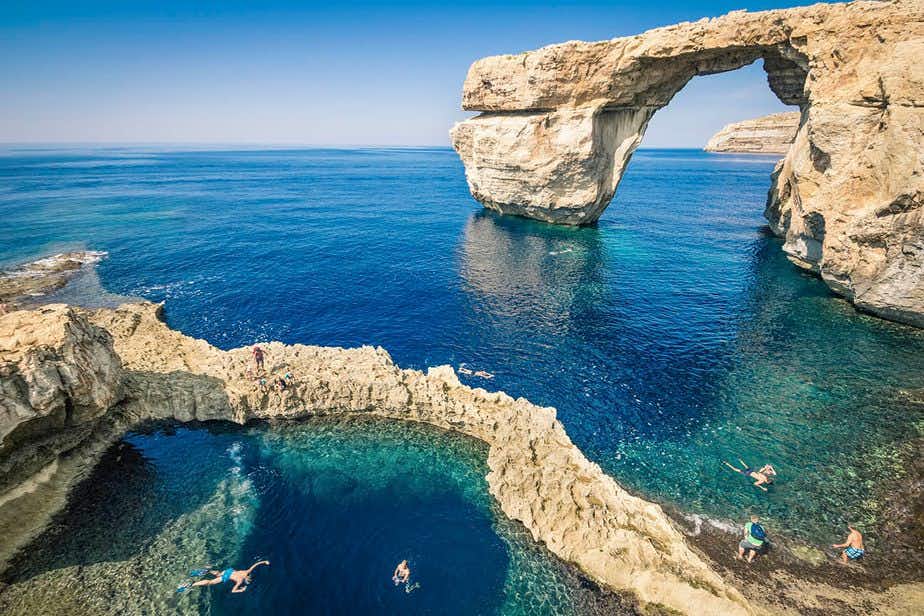 The Azure Window was a natural arch in the limestone cliffs on the island of Gozo, next to the main island of Malta. It was about fifty metres high and the hole had been getting bigger due to erosion by weather and sea, and in March 2017 the arch collapse during a heavy storm.

The Azure Window was a remarkable rock formation off the Maltese coast. Weather and water had created a hole in the rock that was a beautiful feature of the cliffs, especially surrounded by the bright blue water. Unfortunately, not much of it remains.

You can easily walk to where the arch stood, there are many fossils (such as sea stars) in the rocks below, and you can swim in a protected rock pool nearby, but be prepared to clamber across some sharp rocks.

The hole of the Azure Window had been getting bigger in recent years, so it was imminent that one day it would fall down. Once upon a time you could walk across it, but that was a few years ago.

The Azure Window collapsed in the early hours of March 8 in 2017 during a heavy storm. When locals went to check during the day, there was very little left of it.

This is probably the last video of the arch

The first local people filmed after the storm

Swimming in the Blue Hole

The natural masterpiece was found on the island of Gozo at Dwejra Bay in Malta. Now you can only find the remains there. You can still swim in the Blue Hole, which is right in front of the Azure Window.

Blue Lagoon on Comino
Blue Lagoon is very popular and rightly so. As this lagoon in Malta is one of the most beautiful bays in the entire Mediterranean. But if you go exploring this island offers many more beautiful bays. You can also swim and relax at these bays.
Read more
Gozo

Gozo
Gozo is a mystical island of Malta. It’s quiet and open, and there is a temple complex that is known to be one of the oldest free-standing structures in the world. But this island has more to offer, much more.
Read more
Show all articles