See the cherry blossom in Japan

A Colourful Spectacle, Visible all over the Country 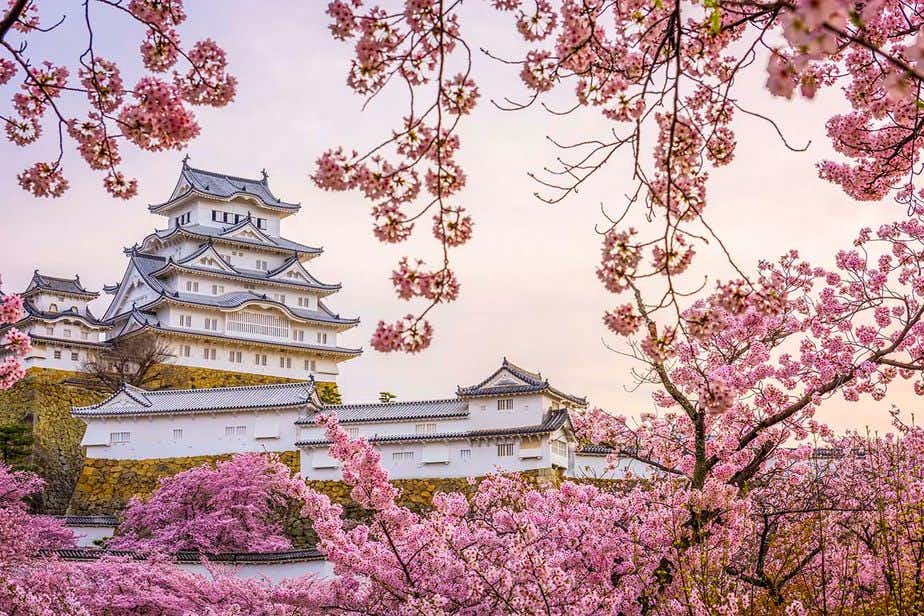 The annual cherry blossom bloom in Japan is an unprecedented color spectacle. You can see it in various places. These are the best locations.

Japan is famous for its colourful spring. From March to the beginning of May the cherry trees blossom, and the country is full of white, red, apricot, purple trees. Is it truly spectacular to see. There are many places where you can see the blossom. Most important is to be there at the right time.

Sakura is the Japanese word for cherry blossom. Every year between March and May the fruit trees bloom, creating a magical, colourful spectacle across the country. Blossom season has become more famous outside of Japan in the past years.

Through social media, many colourful pictures are posted making the rest of the world aware of this phenomenon. But there is an optimal time to see the blossom. These are the 10 best places to see the Sakura in Japan.

The famous cherry blossom can be found in red and white, which incidentally comes in different varieties. One of the most beautiful is East Asian Cherry, just like the Yoshino Cherry. Many other fruit trees are also very worthwhile.

Such as the flowering apricot and the flowering plum trees are doing well. You can not only see various types of trees, but also all kinds of variations. Take a good look at the flowers.

The Meguro river in Tokyo.

When Do the Trees Blossom?

Spring starts in March and ends in May. During this period the fruit trees will bloom. The start of the blossom season depends on the weather conditions of the winter period. Temperature, wind, rainfall, snowfall all have a strong influence on the process of the season.

One of the famous parks in Tokyo is Ueno Park, where many activities are organised around the Sakura. There are approximately 1,200 cherry trees in the park, resulting in spectacular sights when they blossom. There is also a zoo and Tokyo National Museum in Ueno Park. This park gets the busiest of all of Japan in cherry blossom season, so be warned. A good alternative is to go to Shinjuku Gyoen Park in Tokyo.

Maruyama Park is the largest park in Kyoto. The rather big cherry trees in the park are lit up during the night, giving it a whole different dimension. The famous Philosopher’s Walk is the route from the Ginkaku-ji Temple to the Wakaoji-jinja Shrine where you walk through the blossoming trees.

Japan Mint is the area alongside the old Odo river in Osaka. Many blossom trees grow here, resulting in a colourful explosion.

A couple of deer on Nara.

Mount Yoshino is famous for its hills with cherry blossom mixed with other trees. In total there are over 30,0000 cherry trees, reaching from the bottom of the hill (for instance at Shimo-senbon) up to the top of the hills (at oku-senbon). It is a great place to stroll through the hills and enjoy the Sakura. Keep an eye out, you could meet some deer here…

Hirosaki Castle Park in Hirosaki is a great place to see both Japanese architecture and the famous blossom. It’s a great park for strolling around and soaking in these two icons of Japan. There are over 2,600 trees, some of which are over 200 years old.

Best time: late April to the end of May

The old Samuari houses in Kakunodate are the perfect punctuation in the blossom scenery. There are ‘only’ 150 trees here, nonetheless a picture-perfect.

Best time: late April to the end end of May

There are many locations where you can see the trees in full blossom. At the foot of Mount Fuji is also a famous spot. But if you travel through the country will see an abundance of them.

The Nagoya Castle in Aichi is one of the most beautiful castles in Japan. Especially during Sakura, the castle is surrounded by colourful, blossoming trees.

The plum and cherry trees bloom almost at the same time here. Goryokaku is famous for its Hokkaido fortress, one of the biggest fortresses in Japan. There are plenty of fruit trees around the fortress, which bloom every year.

If you want to avoid the busy Ueno Park, the Inokashira Park is good alternative to see the cherry blossom. You can also rent a boat and paddle along the blossoming trees.

Many travellers think the walk from the Daigo-Ji Temple in Kyoto to the top of the hill is the most beautiful one during the cherry blossom. Besides an island full of trees in bloom, there is a nice waterfall.

As Sakura is getting more famous across the globe, it also means more tourist travel to Japan to experience this colourful phenomenon. So it is wise to plan your trip in advance. So you can be sure you have a hotel room of hostel to sleep in.

Eat sushi and sashimi in Japan

Shibuya is the world’s busiest intersection

Shibuya is the world’s busiest intersection
Shibuya is a popular location in Tokyo where there are five zebra crossings that cross from one footpath to another, but also diagonally across the entire road.
Read more
Shirakawa-gō en Gokayama

Shirakawa-gō en Gokayama
The towns of Shirakawa-gō and Gokayama in Japan are famous for their authentic Japanese architecture. It's famous for wintersport, but also for Japanese blossoms in spring.
Read more
The Snow Monsters of Mount Zao

The Snow Monsters of Mount Zao

The Snow Monsters of Mount Zao
Each year a rare natural phenomenon invades the slopes of Mount Zao in Japan. From January till March the trees change into natural sculptures. Snow monsters or Juhyo, like the Japanese, call them. Immense giants due to a large amount of snow.
Read more
Tokyo

Tokyo
Tokyo in Japan It's an intriguing insight on the Japanese take on a metropolis, despite the city's relatively recent re-establishment after it was destroyed by an earthquake.
Read more

all 12 articles on Japan