Eat sushi and sashimi in Japan 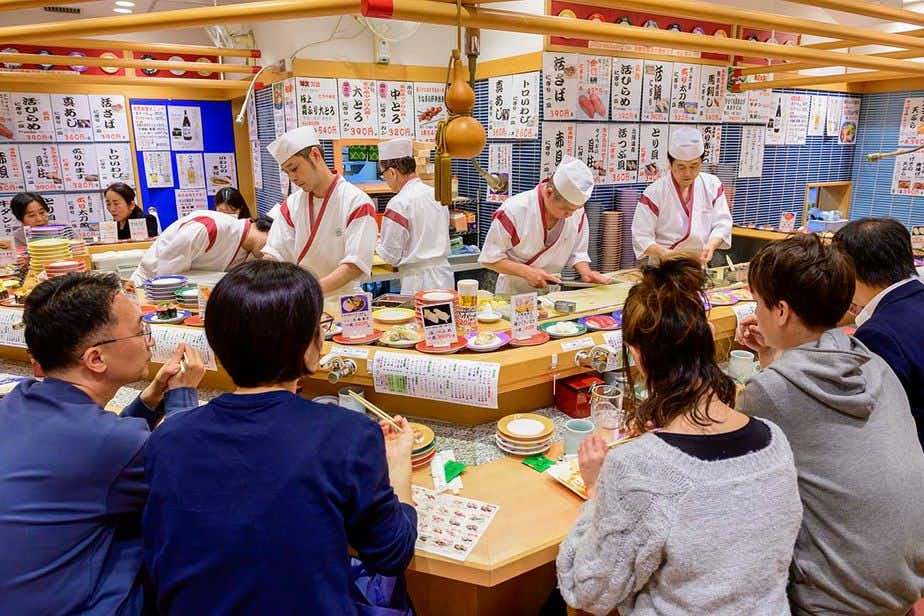 You can get sushi and sashimi in many forms in Japan. Think of special fast food sushi restaurants, but also in luxury tents. And everything in between.

Sushi has become popular throughout the western world. So if you're heading to Japan, make sure you try this traditional food: either in a food hall, a small stall or restaurant, or a fancy restaurant. Or all of those! It's fresh, flavoursome and very diverse. And it's likely that it will be very different from how you know it.

Most people around the world have heard of sushi, and probably even heard of sashimi. You can really go to town on these Japanese delicacies in all of Japan, and especially Tokyo. You can even have sashimi for breakfast, if you like!

Sushi is vinegared rice topped with other ingredients (mostly raw fish), or shaped into rolls, often with nori (seaweed) or thin omelet on the outside or inside.

You have all kinds of shapes and therefore also various flavours. Fish is very popular, but also often vegetables. In Japan you can taste many varieties. And then see what your favourites are.

I discovered during my visit that I have way too many favourites. Which is also nice for the diversity. It means you can eat for days in Japan.

In many restaurants in Japan, these are the most popular way sushi dishes are made.

Sashimi is mainly raw fish, which is often sliced very thin. But there are hundreds of variants. Sashimi is very popular in Japanese cuisine.

A delicious plate of sashimi in Japan.

Real wasabi or not?

Whoever orders sushi or sashimi will usually be served with various side dishes. Such as the powerful wasabi, the plant's official name of which is Wasabia Japonica. But also ginger, radish, rice vinegar, soy sauce and often other sauces.

But, if you are in a good sushi restaurant you get real wasabi. Otherwise you get horseradish with mustard. Oh, and a green dye, because of course it has to look like wasabi.

The Japanese term Omakase means that the chef of the restaurant can decide what to eat. Omakase pretty much means 'I'll leave it to you'. It's common in Japan to say this in a restaurant. Many even have a special omakase chef. This way of dining is certainly different from the Chef's Menu or a surprise menu.

With the dishes served, the omakase chef will respond to: what is fresh and in stock that day, but also how you react to the dishes and what your feedback is. The first dish is light and diverse, so the chef can find out what you like. After which he will make the next dish with your input. So it is a personal experience. Ask if Omakase is an option at the restaurant you're visiting.

Etiquette for eating sushi and sashimi

There has been a true sushi revolution in recent years. Countless variations have been made on the standard sushi dishes. You can also taste these in Japan, although it is, for example, with far fewer sauces than, for example, in America or Europe. Taste it for yourself; also order something you do not know or have never tasted.

Eating sushi also has a specific etiquette. Especially in Japan. Japanese don't mix their soy sauce with wasabi like many Europeans do. And they don't "dip" their sushi roll in the soy sauce, for example. In fact, this is rude. It is best to first observe how the Japanese eat themselves in a restaurant. Which is a pretty sight anyway.

Peter Arkle, a New York designer designed this infographic explaining the do's and don'ts. It is up to you how you want to eat sushi, but it is neat to adhere to the rules in Japan itself.

Etiquette for eating sushi and sashimi in Japan.

In Japan you will find many fast food restaurants, also for sushi and sashimi. They have a special way to serve the small snacks. A conveyor belt brings all the snacks to you.

You sit down and countless dishes pass by on plates. A color indicates the price range of the dish. You take the dish and afterwards you pay for the plates you have taken. I mixed familiar with totally unknown dishes, which was a delicious lunch for example.

In the evening I went to a well known restaurant. Sashimi in particular is much more diverse in Japan, and therefore mostly much more expensive. But to be fair, both restaurants are an experience. And very delicious.

In Japan you can also eat sushi that is not made from fish. But for example from raw chicken or raw horse meat. Which does not always serve a Western stomach.

Bathe in wine at the Yunessun Spa Resort

Bathe in wine at the Yunessun Spa Resort
Yunessun Spa Resort in Hakone in Japan is different. It is a large resort with hot springs, but the park has several unique themes. You can bathe in red wine or coffee, as well as green tea and sake.
Read more
Shibuya is the world’s busiest intersection

Shibuya is the world’s busiest intersection

Shibuya is the world’s busiest intersection
Shibuya is a popular location in Tokyo where there are five zebra crossings that cross from one footpath to another, but also diagonally across the entire road.
Read more
Shirakawa-gō en Gokayama

Shirakawa-gō en Gokayama
The towns of Shirakawa-gō and Gokayama in Japan are famous for their authentic Japanese architecture. It's famous for wintersport, but also for Japanese blossoms in spring.
Read more
The Snow Monsters of Mount Zao

The Snow Monsters of Mount Zao

The Snow Monsters of Mount Zao
Each year a rare natural phenomenon invades the slopes of Mount Zao in Japan. From January till March the trees change into natural sculptures. Snow monsters or Juhyo, like the Japanese, call them. Immense giants due to a large amount of snow.
Read more
Tokyo

Tokyo
Tokyo in Japan It's an intriguing insight on the Japanese take on a metropolis, despite the city's relatively recent re-establishment after it was destroyed by an earthquake.
Read more

all 12 articles on Japan