Walk through an ancient cloud forest full of wildlife 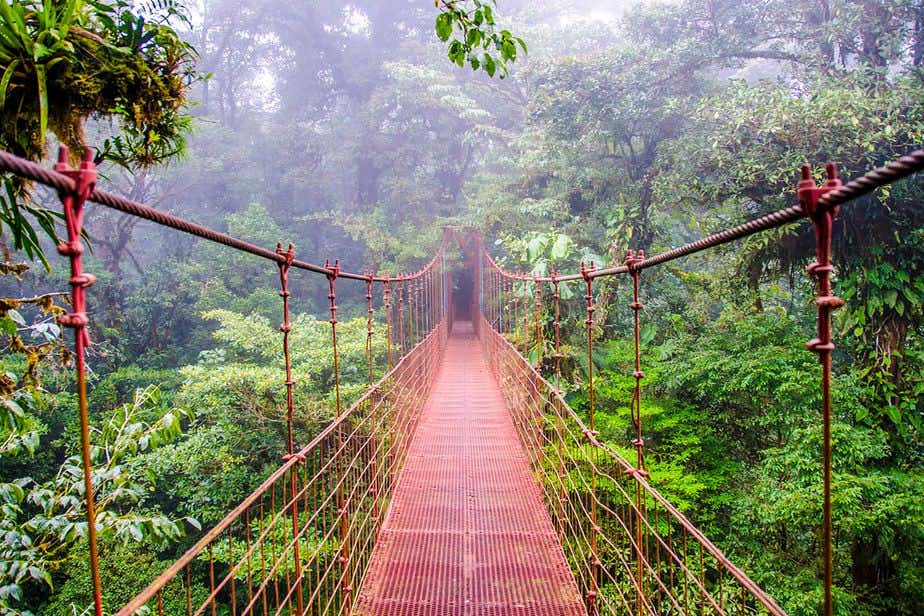 The cloud forest of Monteverde in Costa Rica is full of animals and plants, including 420 species of orchids. Hiking is exceptional. And make sure you go on the Sky Walk suspension walkway in the canopy of the cloud forest.

In the middle of Costa Rica, at around 1,400-meters altitude, are the dense rain- and cloud forests of Monteverde. Home to 1,500 kinds of plant species and 400 different bird species.  Including the quetzal, which many believe to be the most beautiful bird in the world.

Surprisingly, Monteverde Cloud Forest Reserve is a privately owned nature reserve, founded by Quakers. The Quakers were believers who had renounced the church and wanted to start their own life in this part of the world. They also wanted to protect the area where they lived. Making Monteverde one of the oldest private nature parks in the world.

The green hermit is a large hummingbird in Monteverde. ©Corno van den Berg

Monteverde is one of the first places where climate change became visible. In 1989, the golden toad, once abundant in Monteverde, got extinct. Researchers still do not know exactly why, but they assume it was caused by climate change.

This cloud forest is located high in the mountains, where it is always humid. It is home to one of the most beautiful birds in the world: the quetzal.

The area is made up os several well protected reserves. These are the must-see highlights of Monteverde Cloud Forest Reserve.

Exploring the Monteverde cloud forest on foot is a must. There are countless trails you can discover for yourself. The best time to go is early in the morning when many animals are still active. Most commonly spotted are agoutis, quetzals, toucans and coatis.

It is also possible to as canopy tour, where you move from treetop to treetop via hanging bridges. A good way to see many bromeliads and other plants that grow high up in the canopy. It is also a perfect place for bird watching, including the arassaris, family of the toucans.

The Santa Elena Nature reserve is comparable to Monteverde but is cheaper in terms of the entrance fee and much quieter. You can explore the reserve by walking along marked trails and you will come across various viewpoints and rivers that you can cross via bridges.

Santa Elena is a little more to the north of the city of Monteverde. At the entrance/visitor centre you will receive a map with all hiking routes. Keep in mind that you can easily do it in one day. The routes are not difficult, but you do have to climb and descend occasionally.

The Children’s Eternal Rainforest or Bosque Eterno de Los Niños is a unique project. It was set up by a group of Swedish children who wanted to protect parts of the rainforest. It is now 23,000 hectares in size, making it the largest private nature reserve in Costa Rica.

This immense nature reserve is perfect for hiking. It is also known for the Pocosol waterfall. This nature park is less popular than Monteverde and a good alternative, especially in high season.

An owl during the night safari in El Bosque. ©Corno van den Berg

El Bosque is one of the lesser-known nature reserves around Monteverde. And also a lot smaller. Here you will also find a lodge, various hiking trails and you can do tours with a guide. Also, explore the forest itself. The night safaris of El Bosque, in particular, are praised for the number of (nocturnal) animals you will see.

Hiking in the cloud forest

Almost all the tourists come here to hike through the rain forest of Monteverde. This is possible both in Monteverde itself, but also in the Santa Elena Nature Reserve or the Children’s Eternal Rainforest. The reserves are comparable as the cloud forest is the same, just like the wildlife that live in it. Monteverde is busier than the others but also offers more facilities.

Hiking with a guide

One of the best excursions is to go out with a guide. Many people have trouble spotting animals in this wall of greens, but the guides know exactly where to look. And they have knowledge of the behaviour of animals so that you have a bigger chance to spot for example the quetzal.

You can go on a night walk with a guide. During a night walk, you will find that the cloud forest offers a unique world at night. You have the opportunity to see snakes, large tarantulas, countless insects such as walking branches, but also sleeping birds and bats. And with a bit of luck, nocturnal animals such as kinkajous, opossums and possibly a predator such as an ocelot.

The quetzal is praised as one of the most beautiful birds in the world. At least the males are, with his brightly coloured feathers and long, curled tail feathers. In the mating season, the tail feathers of the males grow up to 80 centimetres long.

These birds are only found in Central America. And Monteverde is one of the best places to see this bird. Set off early in the morning to increase your chances. And go with a guide, who knows in which trees the bird likes to be as they like to eat fruits like wild avocados.

The wildlife of Monteverde

The dense vegetation, the many fruits and flowers, in turn, attract many birds, monkeys and other animals. The cloud forest is home to around 130 kinds of different mammals, 500 different kinds of birds, 120 reptiles and amphibians, many of which are only found here. The number of hummingbirds here is remarkable, there are more than 14 different kinds in Monteverde.

Difference between rainforest and cloud forest

The cloud forest of Monteverde lies in the central highlands of Costa Rica, the Cordillera de Tilarán. In contrast to rainforests, cloud forests grow on mountain slopes, generally between 1,500 and 3,000 meters altitude.

And, as the name suggests, they are often cloaked in mist, caused by the warm air coming from the lower areas that rises along the slopes of the mountain, condensing as it gets higher and forming the clouds.

This type of forest has a very unique flora thanks to the high humidity. Trees are slightly smaller than in rainforests, and their branches and trunks are covered in ferns, lichen, usnea, bromeliads and orchids. They fight for every little bit of space. Especially the forest floor is densely covered.

So far about 2,500 kinds of plant species have been counted, including around 420 kinds of orchids. Remarkable are the fig trees, including the Banyan tree that eventually kills its host tree. The dense forest with its many fruits and flowers attracts a lot of birds, monkeys and other animals.

Monteverde means green mountain in Spanish, and the nature reserve was founded by American religious society the Quakers. They headed into the forest at the start of the 20th century, looking for peace and unspoilt nature. They wanted to preserve God’s nature and bought the park in 1972. These days it’s a shining example of modern preservation, and it’s still privately owned.

In the dry season – December to late May – the park is busiest. The quetzal’s breeding season, which is the best time to spot them, falls exactly in peak season.

Birds are most active in April, May and June as it is their breeding season.

As the name already suggests, it can be very wet. With up to 4 meters of rainfall per year, make sure you visit well prepared. Rainfall, and therefore slippery paths, are commonplace here, and so is a brisk wind.

Manuel Antonio National Park
Manuel Antonio is one of the gems of Costa Rica. You are guaranteed to encounter many wild animals, including slow moving sloths and various types of playful monkeys.
Read more
Overnight in a Boeing 727 in the jungle

Overnight in a Boeing 727 in the jungle

Overnight in a Boeing 727 in the jungle
It’s one of the most unique accommodations in the world: an old Boeing 727 has been placed in the middle of the famous rainforest of Costa Rica. You can spend the night, complete with a wooden deck and all the amenities.
Read more
Pan-American Highway

Pan-American Highway
The Pan-American Highway is the longest road in the world. This road is more than 25,000 kilometers long. You can drive parts of the world famous road. These are the best tips for your trip.
Read more
See turtles lay eggs in Tortuguero

Volunteer in an animal shelter for 900 dogs

Volunteer in an animal shelter for 900 dogs
The Territorio de Zaguates shelter in Costa Rica is a paradise for stray dogs. The famous shelter has a no-kill policy and you can help as a volunteer.
Read more

all 10 articles on Costa Rica