Also known as the zoo of Costa Rica; where jungle meets golden beaches 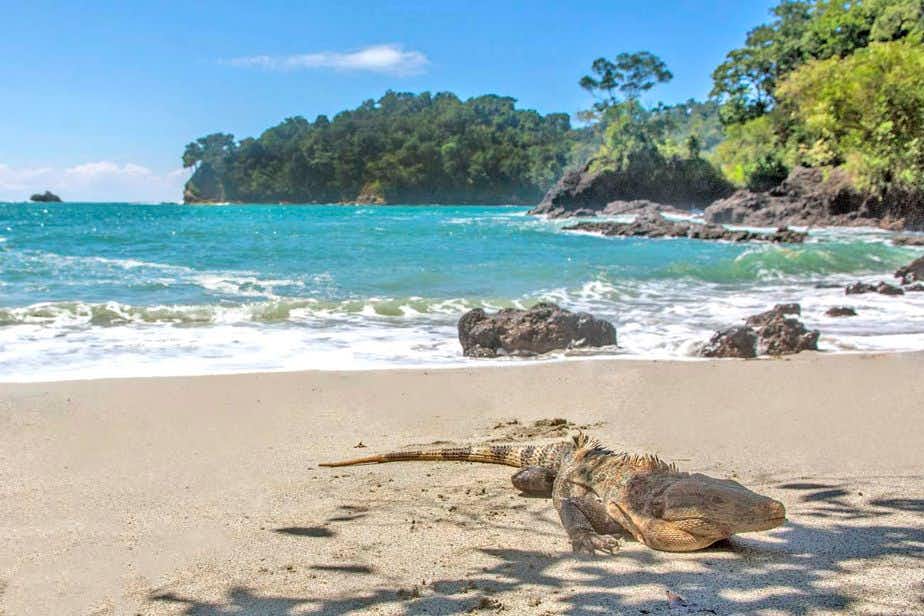 Manuel Antonio is one of the gems of Costa Rica. You are guaranteed to encounter many wild animals, including slow moving sloths and various types of playful monkeys.

The famous Manuel Antonio National Park is on the coast along the Pacific Ocean. It is home to 352 species of birds, 109 species of mammals and 346 plants species. This park is known for squirrel monkeys and sloths, which hang from the trees along the beach.

Toucans and green kingfishers are also often often spotted. The nature reserve is synonymous with golden beaches and a jungle full of wildlife. Discover the best things to see and do in Manuel Antonio National Park.

Most people visit Manuel Antonio to see wildlife. You can find three types of monkeys in the reserve: the howler monkey, which you can hear when you walk around. The capuchin monkey also shows itself often along the trails. This is the white-faced capuchin monkey, one of the species of capuchin monkeys that exist.

You can also easily spot the squirrel monkey; the most special monkey in the park as it only lives in Manuel Antonio and Corcovado National Park. It is almost extinct in Costa Rica.

Also, visitors are hoping to encounter sloths; two-toed or three-toed. They tend to hang in the trees, usually high up so quite hard to spot.

Other animals that you can (and probably will) see are agouti, raccoon, black spiny-tailed iguana, green iguana, lots of crabs and countless birds. Including macaws.

After entering the park, you can walk along the Mangrove Boardwalk. As the name indicates you will walk between a mangrove forest. You can find brightly coloured crabs, as well as various iguanas along the boardwalk.

The beaches of Manuel Antonio are world-famous. When entering the park you can easily access them and go for a long stroll as they are lengthy. There are also smaller beaches that you can access from the various hiking trails throughout the rainforest. Amongst them is Cemelas Beach, which is a wonderful place for a stop to have a picnic for example.

Manuel Antonio has many hiking trails to explore. A great way to see a lot of wildlife. And as most tourists head straight for the beach, also less crowded.

The first hiking route you pass is the Sendero Catarata or the waterfall route. The trail runs straight through the rainforest to a waterfall, at least in the rainy season. Unfortunately, the waterfall is not visible in the dry season. It will more appear like a heavy rain shower. Nonetheless, the trail is worth exploring.

The Playa Espadillo Sur hiking route runs along the famous lengthy beach of Manuel Antonio. It is one of the best places to look for sloths hanging in the trees. It is also an ideal place to lie on the beach and swim in the sea as the water has a pleasant temperature.

The Punta Catedral trail brings you to the far end of the nature park. Along the trail, you will pass three viewpoints overlooking the cliffs and the sea. This trail is more remote so you will encounter fewer tourists here.

The Playa Manuel Antonio Trail runs along the small Manuel Antonio beach. It is also a path that leads to the eastern part of the park. Here you can continue your hike on the Puerto Escondido Trail and the Miradores Trail.

The Puerto Escondido Trail is one of the least popular hiking routes. This is because it is at the end of the park. This route ends at a viewpoint. Along the trail, you can spot howler monkeys. They often sleep on the branches, or you will hear them howling.

The Miradores Trail is a remote route that is usually remarkably quiet. You will come across various viewpoints, which are perfect for photos. As it is more remote, you also have a greater chance to see wildlife.

How to avoid the tourist crowds?

Manuel Antonio is very popular amongst tourists. But also local people tend to spend time on the beaches during the weekend. To protect the fragile nature, the park only allows a maximum of 1,600 visitors per day and 600 at the same time.

It can be rather busy at the entrance and along the beaches, as most people tend to go there. It is quieter along the trails, especially the once going deeper into the park.

Early in the morning, the park is still quiet and the beaches are practically deserted. Apart from wildlife. Including the sloths, monkeys, and agoutis.

It is also a lot quieter in the afternoon. The park closes at four o’clock, so you have little time to explore the different hiking trails. Also, the number of visitors allowed for that day might already been exceeded. Which means you are not allowed to enter.

Manuel Antonio National Park is located between villages. The main access road is at Quepos, where you can also find hotels, bed & breakfasts and restaurants. It is convenient to spend the night here so that you can enter the park early in the morning.

Monteverde Cloud Forest Reserve
The cloud forest of Monteverde in Costa Rica is full of animals and plants, including 420 species of orchids. Hiking is exceptional. And make sure you go on the Sky Walk suspension walkway in the canopy of the cloud forest.
Read more
Overnight in a Boeing 727 in the jungle

Overnight in a Boeing 727 in the jungle

Overnight in a Boeing 727 in the jungle
It’s one of the most unique accommodations in the world: an old Boeing 727 has been placed in the middle of the famous rainforest of Costa Rica. You can spend the night, complete with a wooden deck and all the amenities.
Read more
Pan-American Highway

Pan-American Highway
The Pan-American Highway is the longest road in the world. This road is more than 25,000 kilometers long. You can drive parts of the world famous road. These are the best tips for your trip.
Read more
See turtles lay eggs in Tortuguero

Volunteer in an animal shelter for 900 dogs

Volunteer in an animal shelter for 900 dogs
The Territorio de Zaguates shelter in Costa Rica is a paradise for stray dogs. The famous shelter has a no-kill policy and you can help as a volunteer.
Read more

all 10 articles on Costa Rica