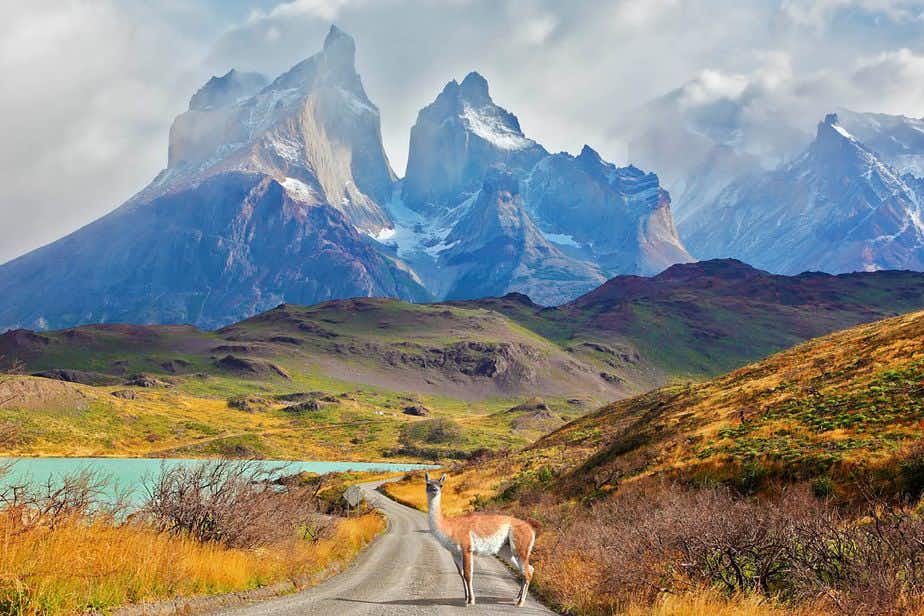 The mountains of the Andes collide with the ruggedness of Patagonia. This is Torres del Paine, perhaps the 'most beautiful' wildlife area in the world. Amazingly, with sheep as its founders.

The background of the Torres del Paine National Park consists of a massive block of granite mountains, pushed up by the nearby Patagonian ice cap. The life line nourishes rugged rivers, robust icebergs, wild waterfalls and bright blue lakes. There is a rich fauna and flora. The absolute pride is the Andean condor, the largest bird in the world. Man is a guest in these surroundings.

These are big names: Patagonia and the Andes mountains. They meet each other in their crown jewel: Torres del Paine. This is nature at its absolute best. It is one of the most rugged territories in the world. The elements wreak havoc on a daily basis. One day, snow storms may sweep through the mountains, while the valley basks in the sun. Four seasons in one day is quite normal in Torres del Paine National Park.

The vast Campo de Hielo Sur, the southern Patagonian ice field, is the largest ice field in the southern hemisphere. This massive stretch of ice measures 14,000 km2 in size and has 48 large and over 100 smaller glaciers. Four of these glaciers end up in Torres del Paine: the Grey Glacier, the Dickson Glacier, the Zapata Glacier and the Tyndall Glacier. They are the beating heart of this territory. The ice is extremely powerful, the glaciers push the mountains upward and feed the wilderness with water, while the cold winds of the ice fields control the climate. This is a sinister place, unmatched in its beauty.

The Lago Grey Glacier is by far the easiest of all four glaciers to reach at Torres del Paine. You can take a boat to the ice and sit back. In the meantime, the landscape continuously changes and chunks of ice float by constantly. In the end, the enormous ice mass of the Campo de Hielo Sur emerges. Just wait for the sound of the ice crumbling away.

Enjoy the ice of the Grey Glacier

With crampons, you can climb the Grey Glacier for an hour, half a day or a whole day. You'll see the forces of nature at work. The enormous mass of ice determines the climate of the entire region.

You can go by boat to the foot of the glacier and from there you can get on the ice. If you go with a guide, you will learn a lot the ever changing ice. For instance about climate change. And the consequences of this, which are measured constantly.

Kayak past the ice bergs of Campo de Hielo Sur

The Tyndall and Serrano River are ideal to explore by kayak. You will come across well-proportioned ice bergs and a very few other tourists. Eventually, you will have a view of the Tyndall glacier. The majestic ice mass and the start of the enormous Campo de Hielo Sur. This trip is also possible in a zodiac.

Hike to the Zapata Glacier

There is no doubt about it. In Torres del Paine you must hike for at least half a day (but actually a minimum of three days). Only then will you be able to appreciate the immensity of this unique park.

There is a large choice of hiking trails, as these amount to over 250 kilometers in total. The hike to the stunning Zapata Glacier is one of the most popular one. You may also decide to walk parts of several longer walks in the park.

Los Cuernos are the most photographed mountains in Torres del Paine. To be fair, they are unbelievably beautiful. The steep mountains have different colours due to the different sediment. They are regularly covered with snow. You'll find them next to the main road so you cannot miss them.

Torres del Paine is well-suited for horseback riding. It is a natural way to see a lot of the area. The horses feel absolutely at home in this setting. You can go out for a few hours, but also go on a trip for a couple of days.

The guide will ensure your safety and prevent you from getting lost. The various hotels, of which Explora Lodge is the famous, provide the service of renting horses. Make sure you can understand your guide, so you may learn a lot from him about the area and everything there is to see.

Search for the elusive cougar (or mountain lion)

Torres del Paine is one of the best places to spot a cougar (or mountain lion). With a renowned biologist and a tracker you can hit the trails during the day (and at night!) to find these animals. The search takes mostly place in the eastern part of the park, where these elusive animals are regularly spotted.

There are no guarantees, but your chances of an encounter are increased considerably. Besides, the information from both the biologist and the tracker will be more than worth your while.

At the beginning of the 20th century, the area was used to keep cattle and for logging. The land had been occupied for use by English and German farmers. In the fifties of the previous century, the government claimed back the land. Although not many tourists see it, the landscape underwent dramatic changes because of the thousands of sheep that lived for a long time. The farmers burnt much of the land, after which the new grass could be consumed by grass eaters.

Actually, the most rugged parts are still intact, simply because neither people nor animals could reach them. It wasn’t until 1930 that the last bits of this remote territory were placed on the map. Because of its beauty, the area surrounding the lakes and the glacier was declared a national park in 1959, which brought about a change in the manner how this territory was perceived. Nowadays, an increasing portion of the area is protected and the park now covers 1,810 km2. It is interesting to see how the vegetation (and the animals) recovered from massive overgrazing and forest fires, except for a few species such as the Taruca, or north Andean deer, which is still threatened with extinction.

Despite human intervention, scientists consider Torres del Paine as a relatively untouched territory where various eco-systems come together, where the air and the water are still clean and vital parts of the eco-system have been preserved. In other words, all the animals and plants for which this territory is a natural habitat, are still present. In the park, 24 species of mammals and 105 species of birds were counted. The wildlife has adapted to the rugged circumstances. Almost all of them are used to people.

Erosion is all around

The territory is relatively young. According to scientists, the Paine-massif is about 12 million years old, a baby compared to the Alps in Europe or the Rocky Mountains in North America. The mountains are heavily eroded, resulting in three granite monoliths. These are the famous Cuernos del Paine (or Tres Torres), of which the Cerro Paine Grande is king, with its 3,050 meters. The peaks are a striking pinkish red in colour, edged with a rim of black slate.

The number of plants in the park is over 200, with seven species of orchids. They particularly grow in the alpine grasslands. The park has some large forests, which are dominated by the Antarctic beech. This species of beech has elegantly curling leaves. You also have the Chilean fire bush (with brightly coloured flowers), the wine palm and countless conifers, bromeliads, ferns, and bamboo. The wind plays a specific role, as it gives shape to most trees, some of which are completely horizontal.

Andes Mountains
The Andes is the largest mountain range in South America with mountains, glaciers, rainforest and countless other natural gems. This mountainous area is about 7,000 km long and 160 km wide in some places.
Read more
Hiking the W Circuit in Torres del Paine

Mirador las Torres
The hike to Mirador las Torres is a special excursion in Torres del Paine National Park. This route is not extremely difficult, although it can be a challenge due to the changing weather. But you'll be rewarded with one of the best views in the park.
Read more
Patagonia

Patagonia
Patagonia, a must-visit for every traveler. This southern region in South America stands for vast mountain ranges and glaciers but you can also find also many wild animals like the puma or penguin.
Read more
Spend the night in an Ecocamp

Spend the night in an Ecocamp

Spend the night in an Ecocamp
A night in EcoCamp Patagonia means sleeping in special domes in the famous Torres del Paine National Park. it is an ecological concept where you sleep in a kind of eco pod. These are special tents that stand out as little as possible in the impressive setting of the world-famous nature reserve.
Read more
Take a Road Trip through South America

Take a Road Trip through South America
You can easily travel from north to south, or vice versa. Or put popular countries like Peru and Bolivia together. Or take a tour of Patagonia. The fact remains that a tour of South America is one of the most diverse journeys on earth.
Read more

all 8 articles on Chile