Unique and Rugged Island in the Southern Part of Australia 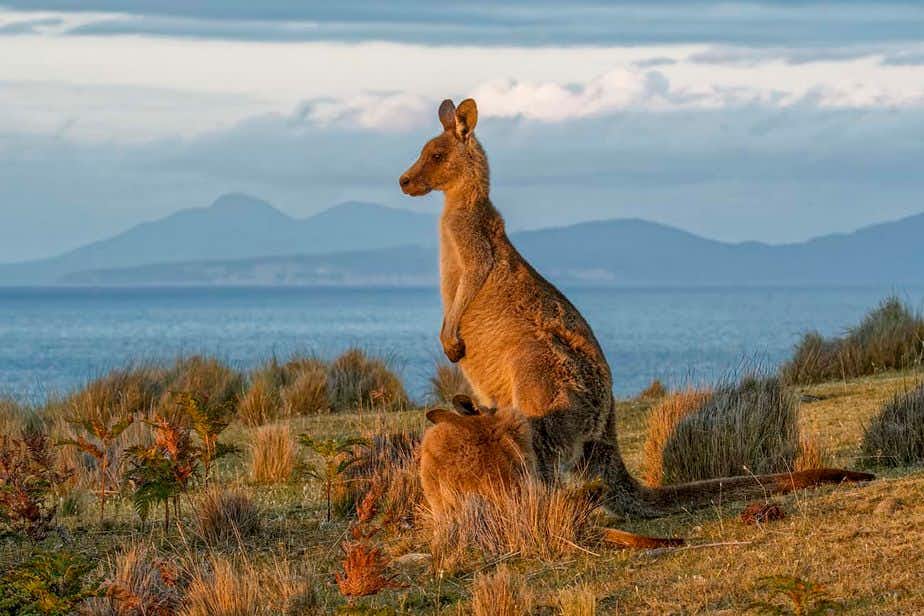 Tasmania is considered a natural wonder. Isolated from the mainland of Australia, the island has interesting and unique flora and fauna that cannot be found elsewhere. More than 37 percent of the island’s natural areas is protected. It’s an idea place to explore and watch wildlife.

The island was discovered by the Dutchman Abel Tasman, hence the name. Tasmania is home to many special animals, huge ancient trees and many endemic plants. And the Tasmanian devil is its most iconic creature. Tasmania is about 200 kilometres south of Australia’s mainland.

Cradle Mountain National Park is in my opinion the most beautiful part of the island. This nature reserve is ideal to see countless wombats in the wild, the animals often walk around the entrance of the park. You can also see other wildlife such as echidna and many birds. Drive slowly, because animals regularly cross the road.
You can make numerous walks in the park, including hiking along the mountain peaks. Don't forget to hike around the lake, with the characteristic boathouse. If you park by the lake, see countless trails for walking. Where you can just end up in the snow, like I did.

Bruny Island is located on the west coast of Tasmania. It is best known for the narrow strip of beach with the sea on both sides. Or rather the D’Entrecasteaux Channel on one side, and the Tasman Sea on the other. From a vantage point you have a wonderful view of the sand and the water.
You can also take a boat trip along the rugged coast, with many  special rocks. Where you can spot sea lions as well as countless sea birds, and with luck dolphins. This island is also known for its oysters. In fact, it even has an oyster drive-in. I've been there and immediately ordered six oysters. They were fresh and very delicious.

The view at sunset from Mount Wellington. ©Australia.com

Mount Wellington is a famous mountain in Tasmania. It is not that high, only 1,271 meters. But the view from the top is magical. There is a special vantage point that is very popular, especially around sunset. What is special is that the top is often covered with snow. Sometimes even in  summer. Mount Wellington is very close to Hobart.

A Tasmanian devil having a meal at Unzoo. ©Corno van den Berg

Unzoo; the name says it all. It is not a zoo, but a necessary evil. And that to save an iconic animal: the Tasmanian devil. This predator is almost extinct due to cancer. At Unzoo animals are bred and if possible released. You can hear all about the philosophy on the spot.
One of the best things is an excursion to the forest behind Unzoo. A guide takes you to check infrared cameras that record the animals. You will receive an explanation and see how the cameras capture the devils, in video, so you van hear their terrifying screams.

A kangaroo on a beach of Freycinet National Park. ©Corno van den Berg

Freycinet National Park is a famous nature reserve in southern Tasmania. This nature reserve has a lovely rugged coast, over beaches and through the eucalyptus forests. You are guaranteed to encounter a small kangaroo, also known as a wallaby. At nightfall they even walk on the beach.
You can visit some viewpoints for a good look over the landscape. Also keep your eyes on the sea, because I saw several whales pass by. I also saw several echidnas very close to the footpath.

In the Styx valley in the west of the island you can find the enormous eucalyptus regnans, also known as mountain ash or swamp gum. Take a walk or a four-wheel drive amongst these giants. In this area loggers and nature conservationists are fighting over the forests, and when you travel around the island you can clearly see the impact of the timber industry on the landscape.

The Overland Track on Tasmania.

It’s considered to be one of the most beautiful walking tracks in the world. The Overland Track runs from Cradle Mountain to Lake St Clair and is 65 kilometres in length. It runs straight through the wilderness of Tasmania and will take you six days.

You must make a booking, and there is are different fees depending on the season. You can spend the night in trekkers’ huts, or on campsites. Take a look around with your torch light at night time, you might spot a few local creatures out looking for food.

In Mole Creek Karst National Park you can see how erosion has shaped amazing caves (more than 300 of them) with stalagmites and stalactites. And you can see millions of glow worms in Marakoopa Cave. They are actually not worms, but the larvae of a local fly, which glow to attract prey. There are daily tours in the cave.

The Gordon River flows in Franklin-Gordon Wild Rivers National Park. Its location is one of the most beautiful excursions in Tasmania. Aboard a boat you can cruise past steep cliffs, dense forests and open plains. You can get off to take a walk around and explore the landscape with a guide. The best time to take this cruise is in the early morning or late afternoon, when there is a higher chance of spotting wildlife and light is better for photos.

You might have heard that the world looks entirely different in the dark. This is absolutely true in Tasmania. You can take a night walk in several of the national parks, guided by rangers or departing from different lodges such as the one in Cradle Mountain NP. Most animals are not scared off by torchlights and are not shy, so you can see them clearly. It’s highly likely you’ll see kangaroos (in all sizes), possums and other marsupials such as the sugar gliders. You can also take a night walk in the popular Bonorong Wildlife Sanctuary in Brighton.

The Tasmanian devil is unique in the world. This predator nearly died out due to a cancer, but seems to be slowly making its way back. Although he needs the help of man for that. The chances of you having this animal in the wild is minimal. But in Unzoo all the more, and you can learn how the animal is helped.

The platypus is a strange mix of a bird and a mammal. Tasmania is one of the best places to see this animal in the wild, although you have to be lucky. Usually it is spotted in small streams at sunset. It is also possible to encounter this animal early in the morning.

The common echidna is one of the nicest animals in the world. It resembles a hedgehog, but is extremely special as it lays eggs. Together with three types of fur hedgehogs, all of which are found in New Guinea, and the platypus, they are the only mammals that do not give birth to live young. Hikers regularly come across this roller, so look carefully at the ground and listen for a rustle.

The unusual wombat is a strange type of marsupial that is still very common in Tasmania. This mixture of a bear with a marmot grows to about 70 centimeters. The pouch is turned upside down so that the animal does not scoop sand into the pouch while digging.
It comes across as quite slow, but is remarkably fast. They eat roots, grass and tubers, among other things. They are seen both during the day and at night (when crossing the road), especially in the various national parks. You can just come across him. Usually these animals are calm and you can view and photograph them well.

The Discovery of Tasmania

The Dutch navigator and explorer Abel Janszoon Tasman discovered the island on November 24, 1642. He was looking for Australia and in particular Terra Australis, which was previously thought to be an undiscovered continent. As he continues his journey, he also discovers New Zealand, but not Terra Australis. As a result, the VOC labelled his journey as meaningless.

The island’s history is very special. Around 10.000 years ago it was still attached Australia’s mainland, but the last ice age caused the water level to rise, and flooded the land bridge connecting Tasmania to the rest of Australia.

The island has its own climate, with snowfall on the mountains in winter. There are several glacier lakes in Tasmania and so much wilderness, which has barely been touched by human presence.

It fauna is also unique, and you could say it’s home to Australia’s original animals.

The reason for this is quite simple, the dingo, a predator believed to be brought to Australia’s mainland from Asia, never made it to this island. Neither did the fox, which was also introduced on Australia’s mainland. You can find animals in Tasmania that can no longer be found in the rest of Australia, or are about to be extinct or only found in very small numbers.

The trees also adapted to their surroundings on this island. You can find the world’s highest deciduous tree in valleys in Tasmania’s west, some of which are located in the green heart of the island and its national parks. Parks such as Cradle Mountain – Lake St. Clair NP, Franklin-Gordon Wild Rivers NP, Southwest NP, Mount Field NP abd Hartz Mountains NP are all entirely conservation areas, but in areas such as the Styx valley conservationists and logging companies are still battling for these ancient forests.

The Unique Northern Part of the Island

Scientists are astounded by the some of the forests in the north of Tasmania, which include tree species that can live up to 10.000 years. They belong to the arctic flora, which literally comes from the ice ages, so these trees are some of the oldest in the world.

Peak season is in summer: December, January and February. Spring can have volatile weather, so if you’re short on time and want guaranteed pleasant weather, it’s best to avoid coming in September and October. March is considered to be a quiet month, and can have nice late summer weather and few tourists.

Red crab migration on Christmas Island
On Christmas Island in Australia one of the largest migrations in the animal kingdom can be watched. Every year around 150 million red crabs head out in the wet season. They make their way from the forest to the beach to mate and lay eggs.
Read more
Visit the Flying Doctors

Visit the Flying Doctors
The Flying doctors are known in all of Australia. You can visit this special aid organisation. And learn everything about how they help people who need it with small planes. You will also hear about the many heroic deeds they have performed. And of course you can support them financially.
Read more
Whitehaven Beach