This Unique Star Wars City was built in the Desert 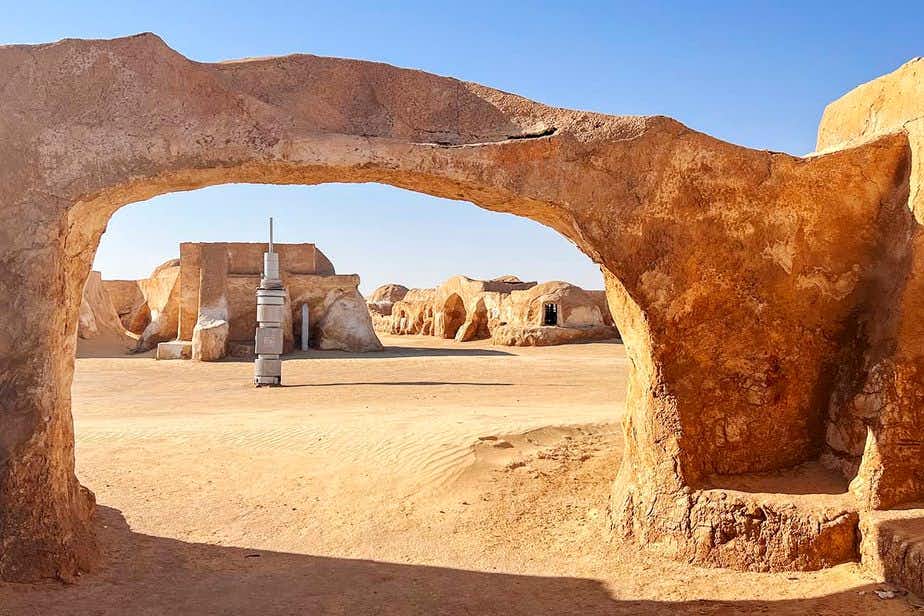 Mos Espa is a famous Star Wars filming location in Tunisia. This fictional city is located in the middle of the Sahara desert near Tozeur and Nefta, on the edge of mighty dunes. It is one of the most important movie sets for Star Wars fans to visit on their tour of the country. To see how director George Lucas created a Space Port from scratch here, which was featured in the blockbusters The Phantom Menace and Episode II Attack of the Clones. These are the best tips for your visit, also to avoid the other tourists.

Mos Espa is a fictional city built for two well-known Star Wars movies, which made it very popular. Mos Espa plays an important role in the films. That's how Anakin Skywalker was born in the town. This slave boy eventually becomes the Jedi's worst enemy: Darth Vader. In Mos Espa you can still see a large part of the film set used, which is recognizable to everyone. And that lies idyllically in the desert of Tunisia. Take your time for a visit, there is more to see than just the Space Port, or the space station from the movies.

As soon as you enter the city you get that special Star Wars feeling. As if you are literally in the movie, or actually on the movie set. According to experts, Mos Espa is one of the most recognizable locations of all films. Makes sense because it was built for the movies, but it also shows how much attention was paid to details.

Even if it was just an appearance, of course. You can visit the various houses, and see that it is all fake. As soon as you walk into a house or other building, you see the wood and the putty. That's the magic of Hollywood isn't it?

You can clearly see that the film set is fake. ©Corno van den Berg

What is striking is that these kinds of unique places are not or hardly protected in Tunisia. Numerous parts of the city have already 'disappeared' or been destroyed. Which is a shame, because the decay is clearly visible. Yet it also has its charm, because it has certainly not been exploited commercially. A middle way would be nice, but also difficult I realise when I walk around here.

You should also explore the surrounding desert, where countless shots have been made of the endless sand and rocks in the desert. It gives you a sense of the desolate Star Wars world. You can walk around in this endless sandbox yourself, but you can also take a camel ride. You can arrange this on the spot. Do negotiate the price, as with everything here. I set out on foot, but before the sun got too hot. So keep that in mind.

Don't forget the view from the dunes of the city. This is very nice, especially because of the long shadows. And you can recognise it from the movies. Make sure to hit the dunes before visiting the city. Or, if you go at the end of the day, the other way around. Then you see how the last sunlight falls on Mos Espa.

Read my article on all Star Wars Locations in Tunisia

This is what the round houses of Mos Espa look like. ©Corno van den Berg

It can get very busy here, so I got here already at sunrise. I was the only tourist at the moment and the sunlight was soft. All in all, it was perfect for photos and videos. Around half past nine, the first groups of tourists arrived and the magic was gone. At least for me.

Star Wars Locations
Star Wars movies are incredibly popular. Did you know that a large part of the scenes in countless films was shot in Tunisia? I went to look at various locations in the country and especially search for film locations. It is certain that these sights are not all easy to find. You don't have to pay an entrance fee anywhere, the location can be visited for free. Though there are plans to change this. The money could then be used to maintain the location better.
Read more