These adorable creatures can be easily spotted 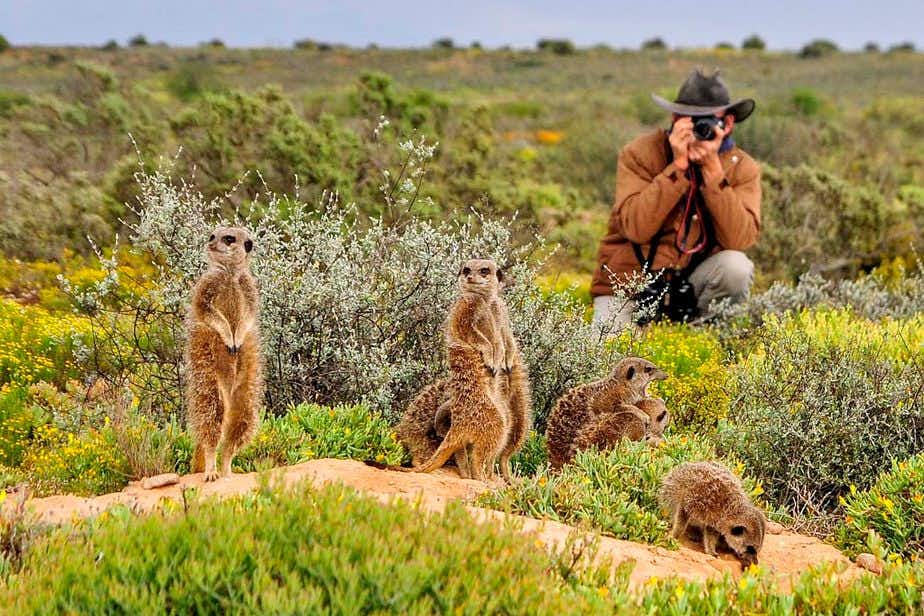 Meerkat are a popular tour in Oudtshoorn in South Africa. The vast plains around this city are one of the best places to see the playful meerkats in the wold. It’s a wonderful excursion to do.

Meerkats are cheerful carnivores that are part of the mongoose family. They’re well known for their characteristic stance: standing on their hind legs, they constantly turn their heads from left to right to see if there are any predators coming.

They live in very social groups. The members of the groups take turns to stand guard, mainly to keep watch for birds of prey, but also to keep an eye on the location of rival groups of meerkats. Other jobs within the group are to hunt, or to mind the babies. Only the leader holds its position for a longer time.

Their nest, or rather underground burrow, comprises sleeping chambers, nurseries and even toilets. You can find meerkats throughout the Kalahari, but interestingly not outside it. They are known to be some of the most social animals in the world.

Thanks to the documentary series Meerkat Manor, meerkats have become very popular. The animals themselves are curious and like to come closer to investigate, and the entire family takes part. They stand guard in tall places, playfully gather food, look after their young – they get a lot done.

Meerkats like to warm themselves in the morning sun, so it pays to head out early to see them outside of their burrow. You can watch them interact with other animals, react to the wind any everything else in their world.

Early in the morning a guide takes you to one of the burrows. This is just before the sun comes out. You can wait a few minutes for the meerkats to wake up and come out of the den. They yawn, play and bask in the sun. They even look at you every now and then. This is an amazing experience.

On safari in South Africa
Going on safari is a popular activity. And South Africa is one of the best places to do this. In most national parks, you can spot wildlife from your own (rental) car. Or you can book a guided safari tour. There are many national parks and private game reserves to choose from. Some a very luxurious, other offer just a basic experience.
Read more
Penguins at Boulders Beach

Robben Island
Robben Island is off the coast of Cape Town, most know it because it was the island where Nelson Mandela was imprisoned. It’s an intriguing place to visit.
Read more