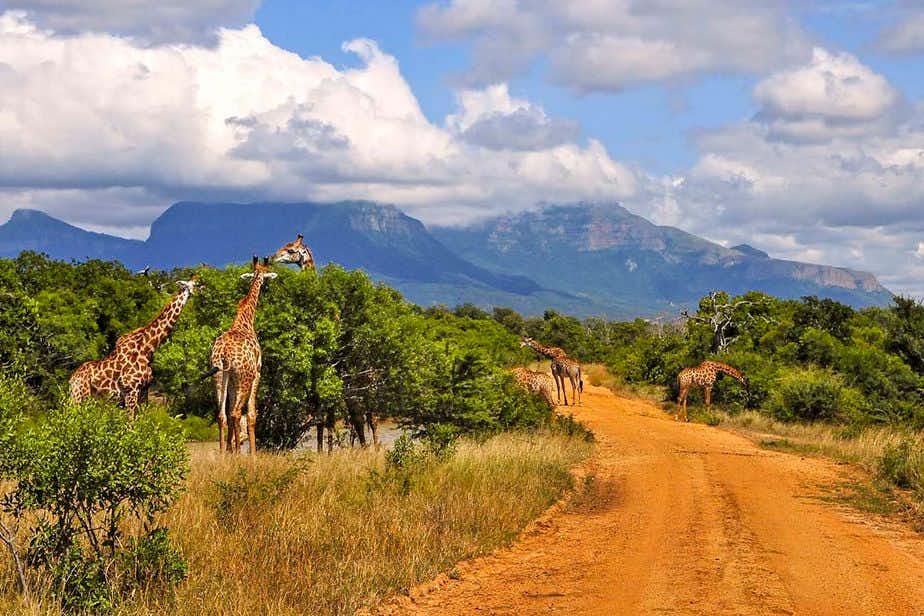 Kruger National Park in South Africa is perhaps the most famous nature reserve  in the world. It is an ideal place for safaris, including spotting the Big Five. You can explore this national park in a private vehicle, too. Nowadays tourist shot with their camera. And their money helps to sustain this natural jewel.

Kruger National Park is one of the best-known safari locations in the world. It has been a protected area as far back as 1898. The reason; all the white rhinos had been shot, as had many other species.

The Big Five is what most visitors want to see. These are the large animals that used to be hunted. Including the elephant, buffalo, rhino (both the black and white rhino), lion and leopard. So it's not about size, because then, for example, the hippopotamus would have been on the list. Or a giraffe.

Kruger is known for being able to see the Big Five in one day (with any luck). The leopard is the biggest challenge. Just like the rhinoceros because of the constant hunt for this animal's horn. But if you stay here for several days, it should work.

The ultimate way to experience these kinds of wildlife areas is on foot. Following the guide and a park ranger, you will experience nature much better than any other way. You’ll follow paths used primarily by animals, and encounters are quite common. Maybe with elephants and zebras, or even with lions. There are various trails that take from one day to several days to complete. You’ll spend the night in lodges, where you will be able to freshen up.

These walking safaris are very popular, so you need to book as far as a year in advance. But there are also are several privately owned nature reserves where you can book walking safaris.

During most safaris you are driven around by a driver and/or guide. However, you can also get behind the wheel yourself, determine your route, and stop for as long as you wish when you meet a herd of elephants, for example.

The chances are that you may miss some animals, because you don’t have the trained eye of a guide, but the sense of freedom is greater.

There are various options, including a rental car to travel from one lodge to the other. You can arrange this yourself or have someone arrange it for you. Be aware that close encounters with animals are common in Kruger National Park.

Timbavati Game Reserve is part of Kruger NP and it is the only place in the world where you find white lions in the wild. These are not albino lions – they miss a gene, which causes their skin to be white. There are only a few of them alive, so people come here from all over the world to see these wonderful animals.

Kruger NP is world famous for camping. There are numerous possibilities, like pitching your own tent at one of the various campsites, but you can also spend the night in more permanent tented camps, which provide a lot more luxury. These camps vary from basic to 5-stars.

It may be an idea to combine the different sleeping arrangements on a multiple-day visit, so one night you’ll sleep among the animals and hear their sounds in a tent,  and switch to a nice comfortable bed, where you can enjoy magnificent views the next night. The options for accommodation are many.

When the evening falls, the diurnal (daytime) animals retire and the nocturnal animals become active. The darkness makes this an entirely different experience. From a jeep, a spotter use light to spot the reflection of an animal eyes, or maybe a silhouette, or movement.

Anything could cross your path here, from an elephant to an elephant shrew (a kind of mouse). You can also encounter more typical nocturnals such as the aardwolf and the common genet.

Ask if you can have a try at spotting. You’ll get the light to search for animals. Soon you realise how difficult it is. When you book your trip with safaris make sure your itinerary includes night safaris. These are not allowed in the park, so they take place in the surrounding private reserves.

Base your route on earlier sightings

The guide (or you yourself if you doing a self-drive) will have to choose what route to take. It can depend on the number of days you are there, on the weather and perhaps also on sightings of animals the day before, for instance wild dogs, lions, rhinos, leopards and cheetahs.

If you want to learn more, ask your guide what he bases his choice on. Or have a look at the maps at the rest camps for recent sightings. You will see that a safari mostly depends on luck, but that you can often help luck happen just a little. Besides this, you can point out that you wish to go in search of cheetahs or that you want to see many elephants, for example.

If you go on safari for the first time, you will want to see the Big Five (lion, leopard, elephant, buffalo & rhino). But even if you have been on safari before, these five remain popular. But there are also the ‘Little Five’, closely connected with their bigger counterparts.

They are the ant lion, leopard tortoise, elephant shrew, buffalo weaver and the rhinoceros beetle. You probably won’t see them all, but it is interesting to search for these animals as well.

The list of animals you can see here is incredibly long. This is truly one of the best places in the world to go on safari. You will be amazed every time you go out.

Other wildlife in Kruger

The number of species of animals in Kruger National Park is large. When you go on safari you have a great chance to see many animals. Such as African elephant, giraffe, hippo, white rhino, black rhino, zebra, eland, kudu, impala, baboon and many more.

Bird watchers come to Kruger for these birds: Pel's fishing owl, white-headed vulture, saddle-billed stork, southern hornbill and game eagle. For the rest, you are likely to see colorful bee-eaters and kingfishers, as well as the lilac-breasted roller, which is considered the most beautiful bird in the savannah.

Dutchman Francois de Cuiper was the first white man to visit this area. Later on, hunting brought mass slaughter, but also ensured the establishment of the park. As far back as 1898.

The park is covered in bushveld, as far as the eyes can see. This is a dense overgrowth of brushes and trees, with some open plains here and there, which are better known as savannahs. Only the silhouettes of various animals may be visible on the horizon.

Hunting was the key for protection

This is exactly what Francois de Cuiper saw back in 1725. The Dutch explorer was the first European to arrive here. He was on an expedition for the Dutch East India Company, to explore new territories. At Gomondwane, De Cuiper and his men were attacked and chased away by the local people and the region was left in peace for decades afterwards.

Hunters heard the stories of the many animals and made their way into the African inland. Over one hundred years ago, the situation changed drastically. Weapons became sophisticated and killing animals became easy. The slaughter of hundreds of animals was quite common in this part of Africa. The plains became increasingly devoid of life and at the end of the nineteenth century, the need arose to protect the environment, even if the purpose was to preserve the hunt at first.

The people’s council of the South African Republic prohibited hunting in crucial parts of the park. Nature was left alone between the Sabie River and Crocodile River. Paul Kruger, who was president of the ZAR at the time, established the Sabie Wildlife Reserve.

The year was 1898, a time when nature protection was non-existent in many countries. Despite the regulations, the project failed. Especially when the Second Boer War broke out in 1899. This lasted until 1902, after which this part of South Africa became a British colony.

British Chief James Stevenson-Hamilton was appointed to be the first park ranger of the area. This nature lover managed to increase the protected area. He also made sure that the rules were strictly complied with. Which made it possible for nature to slowly recover.

The British built a railway line in 1916 that made it possible for the public to visit the park. The concept of ‘going on safari’ was born. In 1926, the area received the status of a national park, the first in South Africa. The park was named after one of its founders: Paul Kruger.

Nowadays, there are extensive plans to expand the park across the South African border and join with other national parks in Zimbabwe and Mozambique. It will be the largest national park in the world; Great Limpopo Transfrontier Park. Kruger is truly a groundbreaking nature reserves.

The region Kruger NP is in has two seasons. The dry season starts in May and goes until early October. In this period, the vegetation will be limited and many animals will be near the waterholes, so it’s easier to spot them.

However, this season also has its charm, with its thunder clouds and the births of many baby animals. Make sure you are properly informed and well prepared for your trip.

Many tourists don’t know Kruger is in malaria territory. Check with a doctor beforehand whether you need malaria pills.

In the past couple of years, there have been several incidents with tourists who had gotten out of their car to take photographs or make a video-recording. This has led to some serious injuries. Never leave your vehicle without the approval of a guide when you are on safari. If you are on a hiking safari, be sure to listen to the instructions of the park rangers.

There are various ways to get to Kruger NP. You can get there from Johannesburg, but also from the Victoria Falls in Zambia. From Johannesburg it is at least a 400-kilometer drive to the Kruger National Park. However, some of the park entrances are at over 600 kilometers from the city.

Many of the more expensive lodges have landing strips and direct connections with the Johannesburg, and flying will enable you to have an extraordinary view of the landscape when you arrive and depart. It in will also save you a lot of time. Enquire about your options when making reservations.

Meerkat tour in Oudtshoorn
Meerkat are a popular tour in Oudtshoorn in South Africa. The vast plains around this city are one of the best places to see the playful meerkats in the wold. It’s a wonderful excursion to do.
Read more
Nelson Mandela Capture Site in Howick

On safari in South Africa
Going on safari is a popular activity. And South Africa is one of the best places to do this. In most national parks, you can spot wildlife from your own (rental) car. Or you can book a guided safari tour. There are many national parks and private game reserves to choose from. Some a very luxurious, other offer just a basic experience.
Read more
Robben Island

Robben Island
Robben Island is off the coast of Cape Town, most know it because it was the island where Nelson Mandela was imprisoned. It’s an intriguing place to visit.
Read more