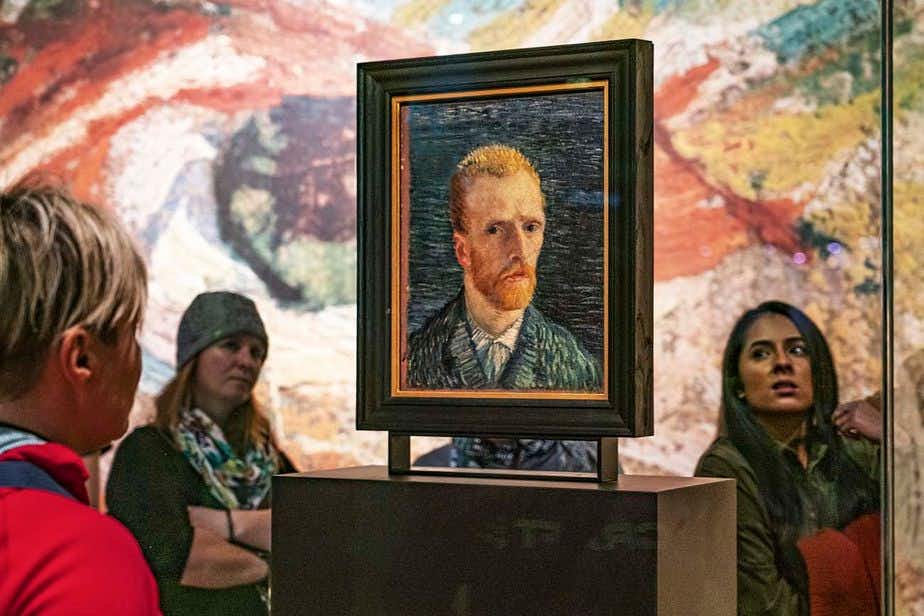 The Van Gogh Museum in Amsterdam is world-famous as it has the largest collection of Vincent van Gogh’s paintings in the world. This museum also has his student’s paintings. You will find about 200 paintings by the master.

The most famous works of art include The Potato Eaters, Bedroom in Arles, and one of three sunflower paintings. Vincent was born on 30 March 1853 in Zundert in the southern part of the Netherlands. He did not live in Amsterdam for long, as he was not accepted to study theology at the University of Amsterdam.

Only in 1879, when Van Gogh moved to Belgium did he decide to paint. Even though Van Gogh led a complicated life he still traveled. His travels included Paris, Arles, Saint-Rémy-de-Provence, and Auvers-sur-Oise in France.

The history of the collection is special, as Vincent van Gogh had little success during his lifetime. The income from the only two paintings that he sold was barely enough for him to survive. After Vincent’s death, his many surviving works went to his brother Theo van Gogh. After the death of Theo, the collection passed into the hands of his widow Jo van Gogh-Bonger.

When she died the paintings were passed to Vincent Willem van Gogh, who founded the Vincent van Gogh Foundation in 1960. Interest in the artwork grew slowly. In 1962 the family received 15 million guilders for the collection. This consisted of 200 paintings by Van Gogh and Paul Gauguin, as well as 400 drawings and 700 letters from Vincent.

The family’s condition was that the collection is to be placed in a museum. The museum opened its doors in 1973. It quickly gained fame in the Netherlands. In the meantime, paintings by Van Gogh were occasionally put up for sale at auctions. These generated millions, which increased interest worldwide. The Van Gogh Museum is now on the list of the most prestigious museums in the world. These are some of the famous paintings in the Van Gogh Museum.

The Potato Eaters is one of the most famous works of art by Van Gogh. He painted this in Neunen and dates back to 1885. This painting depicts the hard life of a farming family, with rough faces and boney hands. Van Gogh often used the colours of potatoes, as he thought the message was more important than the anatomy. The painting was received moderately, as it was too dark and full of anatomical errors. However, it is now world-famous and is considered to be one of the most revered masterpieces.

Some of Vincent’s most famous work was his sunflowers series. He used only three colours to paint the sunflowers. All date back between 1888 – 1889 when he spent time in Arles, France. In his letters, he explained sunflowers were significant to him as it represented gratitude. The painting in this museum is one of his last sunflower paintings.

Self-Portrait with a Gray Felt Hat

The Self-Portrait with a Gray Felt Hat is iconic for Van Gogh’s work. This was painted in Paris in 1887, it portrays himself as a man of the city in his suit and hat. According to enthusiasts, this is a daring, but very successful color experiment. In which he made an unprecedented strong painting with stripes of paint. Notice the dashes around his head, it looks like a kind of halo.

The Yellow House (The Street)

Van Gogh’s masterpiece, The Yellow House is also known as The Street was painted in 1888 in Arles. The painting shows Place Lamartine, including the house where he lived, the one with the green shutters. On the left you see the restaurant where he regularly went to eat. He invited like-minded painters to work together.

The bedroom in Arles

Vincent made this world-famous painting of his bedroom in Arles. It was a simple room with a bed, a chair, a table, and his own work hanging on the wall. The back wall appears to be skewed, which was actually the case. What’s remarkable about this painting is that there are no shadows. Vincent’s intention was to make it look like the old Japanese prints. He later said that this is one of his most beautiful works.

Self-portrait as a painter

Self-portrait as a painter. ©Jim Forest

Another famous self-portrait of Vincent is that of him as a painter. He painted this in 1888 when he lived in Paris. Vincent has a palette with brushes in his hand with the easel in front of him. The bright colours he uses are striking, which was modern at the time. He put the colours side by side so that they would enhance each other. He painted his beard a striking orange color. This was his last painting in Paris

On a walk in Arles in 1888, Vincent came across a sower, whom he painted. This artwork is one of his many drawings and paintings of sowers. The painting is striking with the sky green-yellow and the field purple. Van Gogh deliberately placed the sun behind the man, so that it depicts him as saintly.

Van Gogh painted Wheatfield under Thunderclouds in July 1890 in Auvers-sur-Oise. This painting is of a vast field under a dark sky. An image that is grand and, according to Van Gogh, radiated extreme loneliness.

Look at the architecture when you arrive at the building, as it was designed by the famous architect Gerrit Rietveld.

To avoid the queues it is best to buy your ticket online. Tickets are also cheaper online. On weekends in the summer the museum gets very busy.

The museum is located on the Paulus Potterstraat and the Museumplein in Amsterdam.

Rijksmuseum
The Rijksmuseum in Amsterdam should be visited at least once. In fact, maybe three or four times as it is the most famous museum in the Netherlands. The idea behind the museum is to relate the story of the Netherlands through art from the rich Middle Ages to the present.
Read more
Street Art Museum Amsterdam