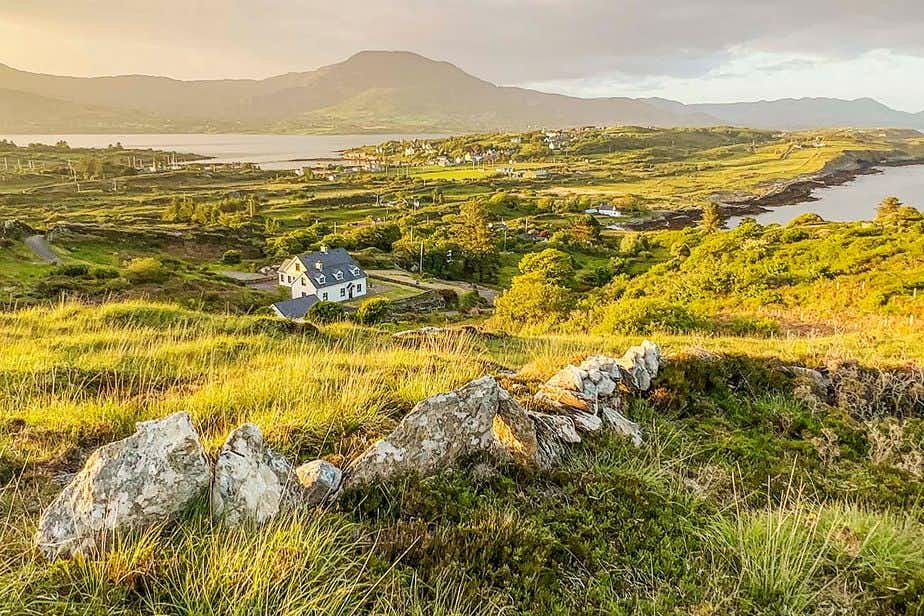 The Beara Way is a famous hiking route in Ireland. The official length is 206 kilometres, although it is also referred to as 185 kilometres. It runs across the Beara Peninsula in County Cork in the south of the country. Along the route, you will encounter numerous sights, such as waterfalls, ancient stone circles and special islands.

Beara is one of the five peninsulas in Ireland. The other peninsulas are Dingle and Kerry, but also Mizen (including Mizen Head) and Sheep's Head. I went hiking in different places, in the woods, along the coast and more.

The Beara Way is a National Irish Trail that runs from Glengariff to Kenmare, mainly following the coast. The trail is easy to average, you have a maximum height difference of 600 meters per part to bridge. The Beara Way is well marked, you can simply follow the green posts. These are some of the peninsula's highlights, which you can see on the Beara Way hiking route.

Healy Pass is popular with cars and motorcyclists. A little less with hikers, although I've seen them here. This famous road winds through the mountains of Ireland on the Beara Peninsula and offers pure driving pleasure. The road is officially called R574 and runs from the town of Adrigole in County Cork to Lauragh. It is a wonderful road to drive with your own car or rental car, although you can also do it on foot of course. Along the way, you will encounter several waterfalls. And many sheep.

Read my article on Healy Pass.

Bull Rock is a rock with a unique history in the Cork region of the west of Ireland. Bull Rock Island is considered by some to be the gateway to the underworld. This rock along the Wild Atlantic Way is located off the famous Dursey Island. The rock in the sea can only be reached by boat from Garnish Point. I did the Bull Rock excursion with a zodiac in good weather and a relatively calm sea.

Read my article on Bull Rock.

The cable car to Dursey Island before the renovation. ©Corno van den Berg

The Isle of Dursey is located on the far western tip of Cork. It is popular with hikers, who love the views over the Atlantic Ocean. Where you can sometimes spot dolphins and whales. The island is especially famous for the cable car that takes you to the island. It is Ireland's only funicular. You can travel over the sea at a height of 250 meters with the historic cable car. In the past, sheep were also transported this way. Check whether the cable car is open. Sometimes it is closed due to too much wind or repairs. You will find the cable car at Inchinaleega.

Glengarriff Woods Nature Reserve is located next to the town of Glengarriff. This is at the beginning of the peninsula and is a good starting point. I went for a lovely hike in the forest, where you hike to a lookout point, among other things. The landscape is somewhat different because of the forests and therefore a pleasant addition.

Garinish Island, less known to us, is known by the Irish as a flower island. With a small ferry, you can visit the island with various gardens, such as the Italian and Greek gardens. These are located in the sheltered harbour of Glengarriff in Bantry Bay. You can take a tour of the many flowers and plants with a guide. Although you can also explore the island with the Ilnacullin garden and the Bryce House. It was merchant Annan Bryce who had the various gardens laid out in 1911.

Just outside the town of Allihies you will find one of the most beautiful beaches in the country. It is a striking golden-yellow sandy beach, surrounded by a lot of greenery. You will automatically see Allihies Beach on the northern side of the Beara peninsula. There is a camping site that is often used by hikers. So you can see the sunset and the sunrise (with some luck). I was very lucky with 25 degrees, sun and no wind. On hot days you will find many swimmers here.

Located off the coast, this island is an oasis of tranquility. Bere Island is ideal if you like hiking. I took a walk past the Ardnakinna Lighthouse, the lighthouse on the western part. I also visited the defense tower in the middle of the island. You will find two beaches, although they are pebble beaches. Also special is the Lonehort Battery, an old fortress of the English.

Kayaking with Seals at Adrigole

An excursion I can recommend is kayaking with seals in the bay of Adrigole. The animals live in this bay and are very curious. As soon as I got out on the water, they came closer to look at that weirdo in a kayak. They kept their distance, even if it was only 10 meters. You can decide for yourself how long you want to kayak, ask locally about the possibilities and costs of the excursion.

The towns of Casteltownbere, Allihies and Glengarriff are perfect for stocking up on food, drink and the like. You can also visit Adrigole and Garinish. You will also come across some bars and restaurants along the way. But keep in mind that this part of Ireland has few people and therefore few buildings. So make sure you are well prepared for your trip.

You can spend the night in B&Bs, hotels and campsites. These are located in the towns and villages as well as outside. I slept in small B&Bs as well as some stately mansions.

Bull Rock
Bull Rock is a rocky island with a unique history in the west of Ireland. It is located off the famous Dursey Island on the Wild Atlantic Way. This rock in the sea can only be reached by boat. I did the Bull Rock Island excursion with a zodiac in good weather and a relatively calm sea. The rock is 93 meters high, 228 meters long and 164 meters wide. These are the best tips, the highlights and stops of this adventurous tour.
Read more
Dunlough Castle

Dunlough Castle
Dunlough Castle is not one of the most famous castles in Ireland. That is completely unjustified because this castle from 1207 is idyllically located on a lake and on the coast of the Atlantic Ocean. It can only be reached on foot, where you also have to climb a bit. But it is more than worth it if you ask me. These are the most beautiful sights of the Dunlough Fort as it is also called. You will also find information about the location and everything about the hike to the castle.
Read more
Healy Pass

Healy Pass
The Healy Pass in the Beara Peninsula is popular with car and motorcyclists. This road winds through the mountains of Ireland and offers pure driving pleasure. Its official name is R574 and runs from the town of Adrigole in County Cork to Lauragh. These are the best tips for driving this wonderful road with your own car or a rental car. With some highlights that you will encounter along the way.
Read more
Mizen Head

Mizen Head
Mizen Head is one of Ireland's five peninsulas in the Cork region. It is best known for the pedestrian bridge over the sea, the signal station and the lighthouse. You can enjoy walking, where you have a great chance to see various wild animals. Here are the best tips to see and do visiting Mizen Head. With the location, the best time and more information.
Read more
Nohoval Cove

Nohoval Cove
Nohoval Cove is a small but beautiful cove in Ireland's Cork County. It is near the village of Nohoval on the south side. This bay is a real eye-catcher because of its steep cliffs and some rocks that rise from the sea. In addition, you will find ruins of an old mine where slate was extracted. These are the best tips for visiting the unknown, but beautiful Nohoval Cove.
Read more
Ring of Kerry

Ring of Kerry
The Ring of Kerry is a well-known scenic drive in Ireland. Through typical Irish landscape; green valleys with sheep, stone houses and more. The route can be easily combined with various hikes.
Read more

all 14 articles on Ireland