Tiger: The best national parks to see a tiger - AmazingPlaces.com 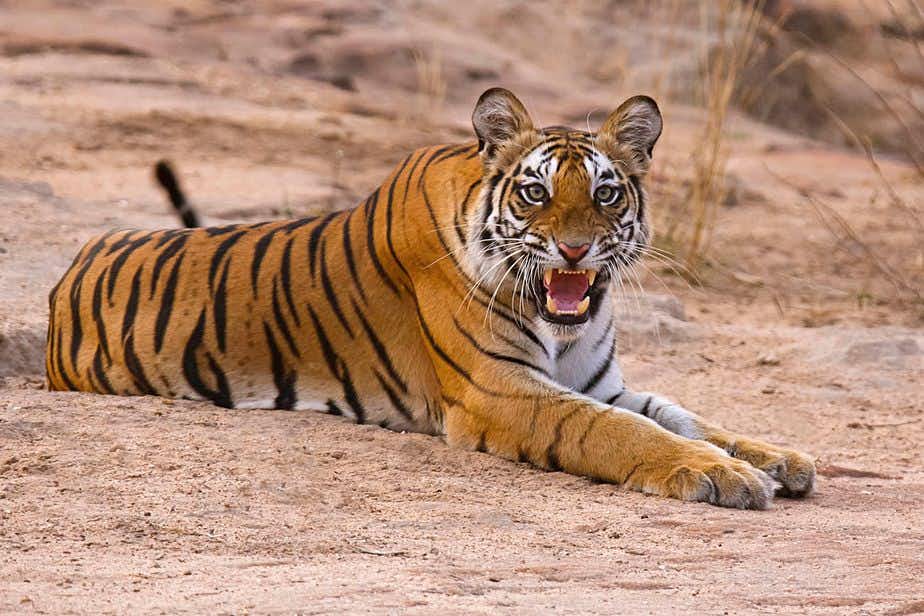 The tiger is an iconic animal. In Asia you can come across this animal when you go on safari. You can have a unique encounter with this predator, sometimes they come remarkably close. It's more than impressive.

Seeing a tiger in the wild is unique. You can meet the predator in different national parks in Asia. Below you will find information about the tiger, the places where the predator lives and how to best see them. You can go on a tiger safari, for example. By far the best place is India, where you have several parks for a tiger safari. The Latin name of this feline is Panthera tigris.

What do tigers eat?

Tigers are carnivores. This means that they eat meat, and it has to be fresh. The predator hunts animals such as various types of deer. Tigers use their camouflage colours to approach their prey, and then surprise and kill them quickly with a bite in the neck. After which they immediately start eating. Unless the mother has young animals. Then she picks it up so that they too can eat.

A tiger safari is comparable to a safari in Africa. You set off with a jeep and driver early in the morning. You'll accompanied usually with a ranger who works for the park. He comes along to check whether everything is running according to the book. Depending on the park, the driver must drive a mandatory route or you can choose your own route.

The driver pays attention to the movement of other animals, but especially alarm calls from deer, monkeys and other animals. If you hear a call, it means a predator is nearby. Usually you wait for a moment where you have to look in the same direction as the deer and monkeys do. For example, this is how I spotted a tiger with a cub.

What also works it to look for fresh paw prints on the road. You're mostly driving on a dirt road, where you can clearly see the footprints of a tiger. The driver follows this trail in the hope of seeing the animal. If the tiger has gone into the bushes somewhere, they'll wait for a few minutes on the spot.

But, you have the greatest chance of seeing a tiger, which has been spotted by someone else. Most drivers are in contact with each other via walkie-talkies, and if a driver has spotted a tiger, he first takes pictures with his guests. Then he informs his colleagues. Which can lead to absolute chaos if everyone hears it. Especially if it is the first tiger of the day. Be prepared for that.

The chaos of Asia

It can happen that twenty cars are parked around a tiger. Often with a roaring engine and very noisy tourists. This is really different from Africa, although it can also get chaotic and busy there as well. I sometimes didn't like it. One car that is anti-social in front of another, while the animal becomes more and more restless.

Best tips to see a tiger in the wild

Most people book a morning or afternoon tiger safari. This way you certainly have a chance to see a tiger, but it is also not working. The nice thing is that you don't know, so the tension is great.

It is better to do two safaris in one day. So that you have a better chance. But it also let you see how the animals are active in the morning, and how they become active again in the afternoon when it cools down. Most national parks have enough accommodations to stay for lunch, for example.

It is even better to go on safari for several days to increase your chances. The big advantage is that you get to see many more types of animals. In addition to various types of deer, also monkeys, but also, for example, a gaur (kind of cow) and perhaps wild dogs. Or, like me, a sloth bear. I saw this animal twice in different parks in India.

In addition to the well-known parks in India, it is a smart idea to visit less well-known parks. These are less frequented, but mostly do have a good tiger population. They are not visited by most tourists.

The tiger, according to scientists, consists of only one species. And not from several as you often read about. These animals also live in Bangladesh, Nepal and Bhutan, as well as part of Russia. There are six subspecies, such as the Siberian tiger (which can become the largest) and the Sumatran tiger (the smallest). Adult tigers can weigh as much as 250 pounds.

It is estimated that around 100,000 tigers were still living in the wild in Asia by 1900. Including, for example, also in Bali. But a lot of the habitat of tigers has disappeared. In addition, the trade in tiger skins and later the bones of these animals became a lucrative market. Thousands of animals were shot for this.

A census in the early 1970s revealed only 1,800 tigers left in the wild in India, the most important country for this animal. The future of this animal is by no means certain. Hence, extra protection is necessary.

Project Tiger was started in India in 1973 to protect the national symbol's extinction. Numerous former hunting grounds of the maharajas (the former rulers in the various kingdoms) have been renamed national parks.

At the moment there are 27 parks where tigers live in India. At least on paper, because poaching is still a major problem. In China, the bones are used for medicinal purposes, while the fur is a status symbol for many Asians.

For many travellers, the tiger is one of the Top Ten animals to see in the wild. The largest feline in the world now attracts many nature lovers, especially to India. A close second is Nepal, although the chance is significantly smaller there.

The money from the tourists is used to maintain the parks. As well as to fund anti-poaching patrols. Various nature organisations such as WWF, EIA, Save the Tiger Fund, are now also committed to preserving the largest cat in the world.

Best places to see a tiger in the wild

Sundarbans
The Sundarbans is the largest mangrove forest in the world. It's an area that includes the delta of the Ganges river, and is home to man eating tigers.
Read more