Largest cave in the world is located in Vietnam 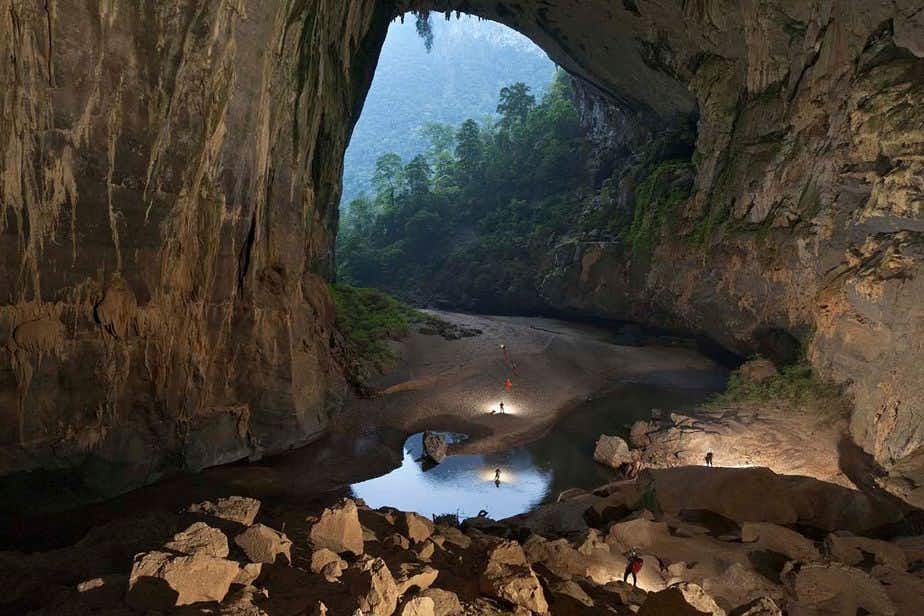 Since 2009 the Hang Son Doong Cave in Vietnam is known as the largest cave in the world. Visiting the cave is a multi-day adventurous excursion.

The Hang Son Doong Cave is the largest cave in the world. It opened to tourism in 2014. When you see footage of this remarkable natural phenomenon, you’ll quickly add it to your bucket list.

The cave became famous in 2009 when it was declared the largest cave in the world. It is five kilometres deep and 150 metres wide and up to 200 metres high. A river flows through the cave, and there is even a tropical rainforest. The plants and trees can grow thanks to the sunlight that shines through the sinkholes along the cave ceiling.

A visit to the Hang Son Doong Cave. ©Carsten Peter

New research in 2019 revealed: Hang Son Doong is even bigger

In May 2019, three British divers went on an expedition into the cave. They investigated the waterways and promptly found a new underwater tunnel. They found that one of the underwater tunnels connects Son Doong to another cave; Hang Thung. This means the cave is even bigger.

Son Doong means mountain river cave, obviously named after the river that runs through the cave. The river created this cave around 2,5 million years ago. The water slowly eroded the lime stone surface, which sometimes caused the top of the cave to collapse.

These sink holes are especially interesting as they create an environment for lush vegetation to grow inside the cave. Another remarkable thing in Son Doong are the so-called cave pearls, perfectly formed spheres created by concretion of calcium salts that form layers around a grain of sand, for example.

You can see incredibly far in the cave. ©Carsten Peter

Access to the cave is difficult. It can only be reached by taking a multi-day camping expedition with a guide. It’s very pricy (around 5000 US dollar) and gets booked out quickly. There is a waiting list of several months, because the trip is so popular.

Halong Bay
Halong Bay is one of the most beautiful places in Vietnam. And this nature reserve certainly belongs on your list. But it is also very touristy. But with these tips you get the best out of your trip.
Read more
Show all articles