Wieliczka Salt Mine in Poland: 10 Reasons Why You Should Visit

Mine with Underground Cathedral and Chapels 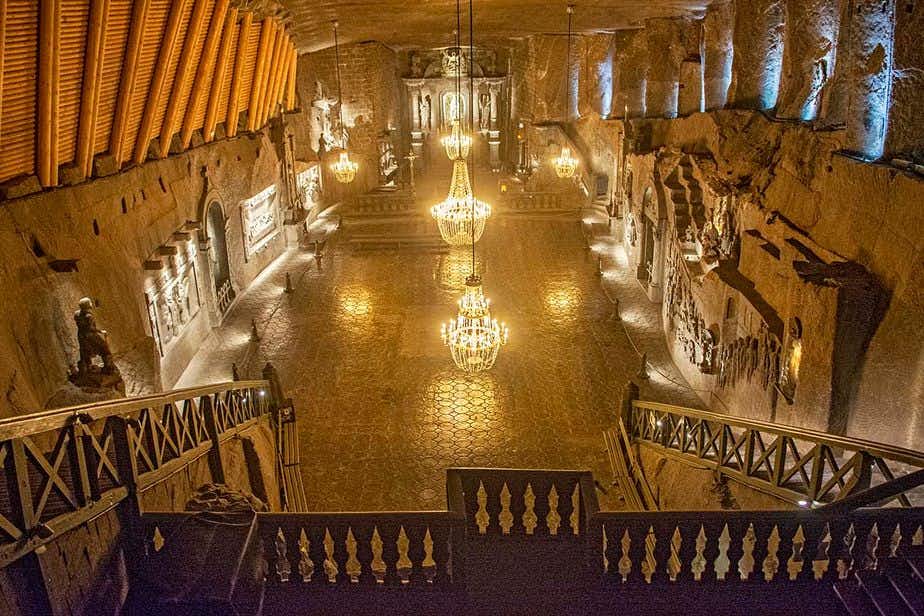 The Wieliczka Salt Mine gives a glimpse into the wonderful underground world of Poland. After the heavy work, many miners stayed overnight. In their spare time, they turned the mine into a true work of art. With a cathedral, chapels and mosaics. There is also a spa and a hotel to spend the night underground. These are the sights and best tips for visiting the Wieliczka Salt Mine.

This salt mine is more than just a big mountain of salt under the ground. It is because of its history that this mine is worth a visit. The mine shafts run from over a hundred meters to 327 meters deep. The mine is no less than 300 kilometres (!) long. Only a small part is open to the public. The first mention of the extraction of salt dates back to 1044. Salt used to be worth a lot of money, especially among the wealthy. The extraction lasted until 1992.

Tourists have been coming to Wieliczka for centuries. As early as the 15th century, people came to see salt. Some of the famous visitors include Nicolaus Copernicus (mathematician and astronomer), Johann Wolfgang von Goethe (poet), Alexander von Humboldt (explorer), Robert Baden-Powell (founder of the scouting) and Karol Wojtyła, who later became Pope John Paul II. became. Emperor Franz Joseph of Austria-Hungary and Prince Harry of England also visited this mine.

Impression of the Tour

With a guide, you can take a tour of the salt mine. This is done in a group. During which you descend to a depth of 135 meters. You enter the corridors through special fire doors. You soon notice how big it is. Corridor after corridor passes by. You can see the salt on the wooden posts, it turns white.

The route is 3.5 kilometres long with several steps down. Along the way, you will get more information from the guide about the various attractions. Because of the many groups, you have little extra time, since the next group is coming. A visit takes about an hour and a half. The route is not difficult. At the end, you go up again with an elevator. This makes this excursion also suitable for children.

Art Work at Wieliczka Salt Mine

A mural in the salt. ©Corno van den Berg

The workers who kept mining the salt did not always want to walk up and down the stairs. So they stayed during the week. The miners built numerous underground works of art, including statues of historical and mythical figures. But you also see countless murals in the salty rocks. Until eventually the extraction became too expensive and the miners disappeared. After which the artworks were left behind.

An image of Christ made of salt. ©Corno van den Berg

The most famous work of art is the Wieliczka Cathedral. Officially it is called the Chapel of St. Cunegonda of Poland. You can reach the cathedral via a staircase, but first take a leisurely look from above at the immense building with the striking chandeliers.

One of the chapels in the Wieliczka Salt Mine. ©Corno van den Berg

During the tour you will pass various chapels, which the miners use to pray. They are usually built with a striking amount of wood. That after hundreds of years is still well preserved. Some chapels are small, others impressive.

A lake in the Wieliczka Salt Mine in Poland. ©Corno van den Berg

One of the most unique attractions is the underground lake. It is filled with green water. At least so it seems. But it is the lack of sunlight that gives it a green glow. This is one of the most photographed spots of the Wieliczka Salt Mine.

This Salt Mine has been placed on the first list of World Heritage by UNESCO. This already happened in 1978, along with iconic places such as Yellowstone National Park (US) and the Galapagos Islands (Ecuador). Between 1989 and 1998 it was on the list of World Heritage Endangered due to moisture problems. A thorough renovation has solved this problem.

Location of Wieliczka Salt Mine

The mine is located in the middle of the town of Wieliczka. The distance to Krakow is only 15 kilometers, or half an hour away by car. When you arrive you are actually above the mine. There is nothing to show that there is a world beneath your feet. At the main entrance you will see a tower with a shaft, which indicates the mine.

The Bochnia Salt Mine is a similar mine and has been a UNESCO World Heritage Site since 2013. This is one of the oldest salt mines in the world. Salt has been mined at this location since the 12th century. Until its closure in the 1990s, it was the oldest European salt mine in operation. This mine is located about 40 kilometres from Krakow and can also be visited. The location is in the town of Bochnia, half an hour's drive from the Wieliczka Salt Mine.

Dunajec River Rafting
You can take a trip on an ancient wooden boat through the rugged Pieniny National Park in Poland. This excursion is called Dunajec River Rafting where you go out on the water with a unique boat. It's very different from whitewater rafting, but just as much fun. I got on board and rafted down the river.
Read more
Krakow

Krakow
Krakow has been a popular city for a city trip for years. With good reason, because the historic centre of Krakow is on the World Heritage List by UNESCO. If you walk around here you will quickly understand why. The past is literally still visible.
Read more
Tatra Mountains