A unique lake with hundreds of thousands harmless jellyfish 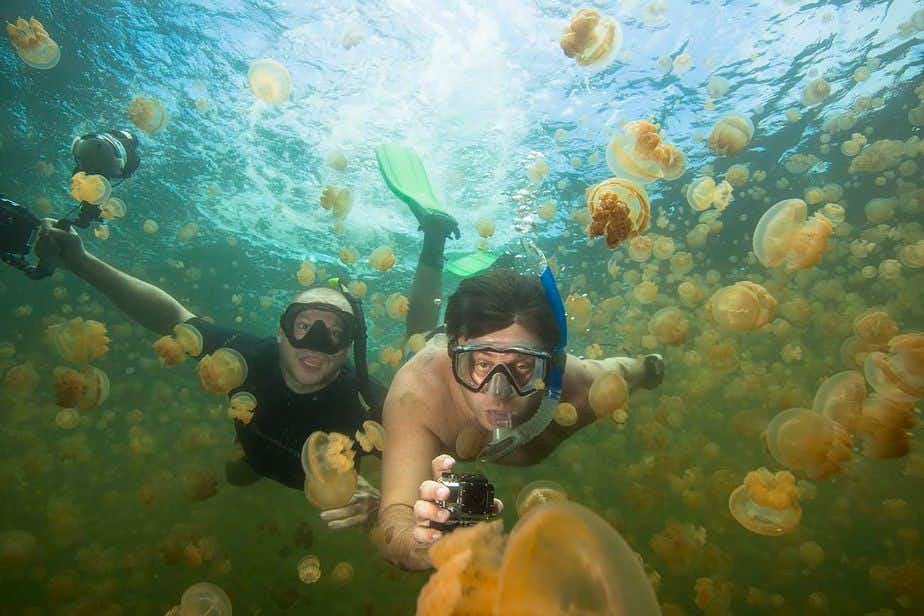 The famous Jellyfish Lake in Palau is full of well, jellyfish. Really, really, full of them. They enter the lake via a small passage between the ocean and the lake, but they can’t go back that way, so they get trapped in the lake. And you swim with them.

The locals call it Lake Ongeim’l Tketau, which is not easy to pronounce. While the English name is Jellyfish Lake. Most tour operators use this name for their excursions to the lake. You can also visit the lake yourself. The jellyfish lake is located near Koror on the island of Eil Malk, which is one of the many islands that belong to Palau.

What is so special about Jellyfish Lake

The photos (and videos) are famous on social media. Yes, you have to dare to go into the water. As soon as you arrive you see the animals. Hundreds, no thousands of jellyfish. Swimming with these animals is not something that makes sense, right?

Swimming in the Jellyfish Lake in Palau.

There is nothing like it anywhere else in the world. And you soon realise the absolute beauty of it once you’re immersed in Jellyfish Lake. It’s an amazing experience to swim between these graceful creatures.

The jellyfish are non-poisonous and completely harmless, so it’s safe to touch them. And it’s not really as if you could avoid doing that, because the lake is absolutely teeming with them.

Why was the jellyfish lake in Palau closed?

The lake was closed at the end of 2017, because the jellyfish died en masse. At one point, 8 million of these harmless animals swam around, but fewer and fewer. The reason was not entirely clear, but a human cause could not be ruled out. Sunburn, for example, could harm the delicate creatures.
Numerous scientists are now researching the phenomenon. That also happened at the end of the nineties. Even then they kept on dying, but a breeding program brought a solution. That also happened now. According to the government, there are now enough. And the animals can be visited again.

In November 2018, the government banned all sunscreens that are harmful to the coral and other animals. This makes it the first country to prohibit this. When you enter the country, you must sign that you will handle the nature of the country with care. In addition, everything is monitored. To prevent the jellyfish from dying en masse again.