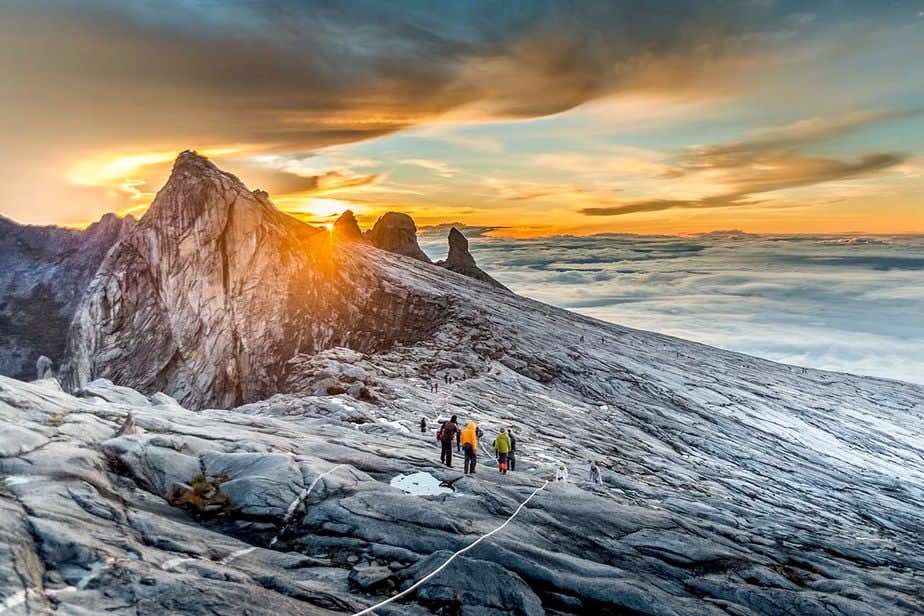 Mount Kinabalu is the highest mountain in Malaysia at 4,095 meters. It rises high above the Bornean rainforest. And you can climb this mountain for a perfect sunrise.

Kinabalu is an impressive mountain, it is part of the Crocker mountain range in Borneo and the local people refer to it as Gunung Kinabalu. It’s a weird lump in the undulating landscape, reaching high above the metres-high rainforest of Borneo. It’s beloved by tourists, not just because you can climb it, but because of its awesome surroundings.

Constant erosion from mist and rain have turned the top of Mount Kinabalu into a rough rocky area. You can climb Mount Kinabalu, even if you’re not an experienced mountain climber. The Mount Kinabalu Summit Trail is a challenging two-day hike that needs to be planned well in advance. But once you reach the top, you’ll be rewarded with spectacular views, especially at sunrise.

What does the ascent of Mount Kinabalu look like?

Walking around this area will amaze you, you walk out of the jungle and past the tree line to see the granite in all its glory, and if you’re here in the early morning, you could be lucky enough to watch the sunrise from the mountain top.

Mount Kinabalu is a ‘tourist mountain’ which means you can reach its peak without having any climbing experience, but this doesn’t mean it’s an easy ascent. It takes two days to rise up around 2.200 metres (and back), come rain or shine – or both.

The first day you'll start from 1.866 metres altitude.  It’s a trail comprising wooden bridges, hewn staircases and steep tracks. Most people take four to six hours to complete it. Of course it also depends on your fitness levels and how long you pause to take photos of the many orchids, pitcher plants and animals along the way.

Accommodation and meals at Laban Rata

At Laban Rata, you'll find a few mountain huts at 3.272 metres altitude. You'll probably arrive at your cabin while there is still daylight. It is wonderful to explore the rugged area. You'll see how porters bring food and drink up on foot. You also have an unparalleled view of the tree line.

In the mountain hut you will receive a hot meal and various drinks. including tea, coffee and soft drinks you can buy. You can also rest on a bed for a few hours. I didn't really sleep because of the adrenaline. But also because I didn't want to miss the alarm for the last part.

The final climb to the top

After a few hours’ rest and a meal you head off again around 3 in the morning. The goal is the mountain top, known as Low’s Peak. It’s at 4.095 metres and you can watch the sunrise around 6 am, weather permitting.

When you’ve seen the first rays of sun you return to have some breakfast in the mountain hut. The big question is: how fit are you? Because the record for the round trip (yes, both ways!) is two hours and forty-five minutes, and the oldest person to have ever done the trek was a ninety-two-year-old woman.

If you’re fit and have good stamina you can do it, and you’ll enjoy it. Make sure you bring a head torch or hand torch. For many people this is the highlight of their trip to Borneo.

Heading back down in the early morning. ©Corno van den Berg

Mount Kinabalu, Kinabalu for short, is the only mountain between the Himalayas and the volcanoes of Java and Papua New Guinea. It’s a special place with numerous interesting plants, including large carnivorous pitcher plants, as well as the rafflesia, the largest flower in the world. You can climb Mount Kinabalu, even if you’re not an experienced mountain climber.

The locals think that Kinabalu is the highest mountain in South-East Asia, but it’s not. That’s the Hkakabo Razi in Myanmar, which is much taller with 5.881 metres. There are actually many peaks higher than Kinabalu in the Himalayas, but Malaysians don’t consider Myanmar to be part of South-East Asia, though officially it is.

The wonderful nature of Mount Kinabalu

Due to its location there are different kinds of climates on the mountain, accomodating a huge variety of plants. Botanists have counted more than 4.000 plant species here, to date. These include many orchids, and dozens of carnivorous pitcher plants, which are endemic (only grow here), as are many other plants here.

Kinabalu and its surrounding mountain range is one of the richest natural areas in the world, boasting 326 kinds of birds and more than 100 mammals call this place home. It’s an incredible wealth that belongs to a natural treasure such as Borneo.

Is it a volcano?

For a long time people believe that Mount Kinabalu was an extinguished volcano, but recent research has disproven this. The mountain is made up of granite, formed by the solidifying of magma about 15 million years ago. The force of the magma created the granite and pushed the whole mountain up, there was no volcanic eruption or activity.

The lovely view on Mount Kinabalu.

The best time here is when it’s driest in Asia, generally between January to late April. The average rainfall is around 100 mm then, though you can still get drenched any time of the year.

Some tourists underestimate the climb to the peak of Mount Kinabalu, please keep in mind that lots of climbing and clambering is required.

Make sure you bring warm clothes and a torch for when you head off on the second day in the dark. Food is provided in lunch boxes, and hot food is served in the mountain huts. Some say that Laban Rata Resthouse is the best.

You can suffer from altitude sickness from 3.000 metres, so it’s possible to experience it on this hike. If you get a headache, head back down and see if you improve. If not, you might need medical assistance or medication.

Danum Valley
Danum Valley is a world-famous nature reserve in Malaysia. It is part of the immense rainforest in the heart of Borneo. This valley is home to a huge variety of animals.
Read more
Kinabatangan River

Kuala Lumpur
Kuala Lumpur is for many the first introduction to Malaysia. This city is very worthwhile. Because of the delicious Malaysian cuisine, the chaos and much more.
Read more
Malaysian Borneo