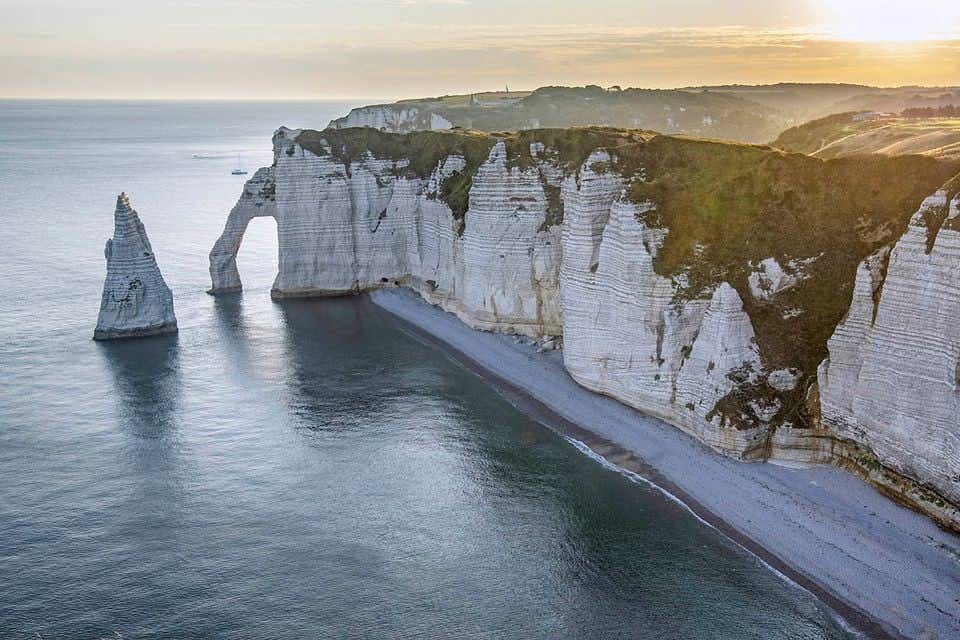 Étretat is a series of chalk cliffs in France. Erosion has created three natural arches, which can be viewed from both sides. The light falls differently at any time of the day, perfect for photos.

This area is best known for L'Aiguille (or The Needle), a pointed formation just off the coast which rises 70 metres above the sea. The cliffs are remarkably steep. You can easily hike the cliffs and the surrounding  beaches.

Most famous is the cave in the rocks on the coast. This can be reached on foot at low tide. In this part, you can enjoy a walk between the cliffs that have been created by erosion.

The Chapel of Notre Dame de la Garde at Étretat

The Chapel of Notre Dame de la Garde is a special chapel near Étretat. It lies along the coast with a good view of the cliffs. You can easily walk to the church and have a rest. Be aware, it can get busy.

The Chapel of Notre Dame de la Garde at Étretat.

The legend of the fisherman

Locals can tell you the story of the Swedish fisherman. In 1792, he was the only crew member who survived a storm. The fishing boat ran aground and the rest of the crew did not survive.

According to the story, the local residents went to check on the ship the next morning. They found the Swedish fisherman in a cave. As they thought he was dead, they brought him to the cemetery. However, arriving at the cemetery, the fisherman opened his eyes and turned out to be alive. Ever since the cave has a special meaning to the residents.