Diving or snorkelling in the Red Sea

Unique aquarium between Africa and the Middle East 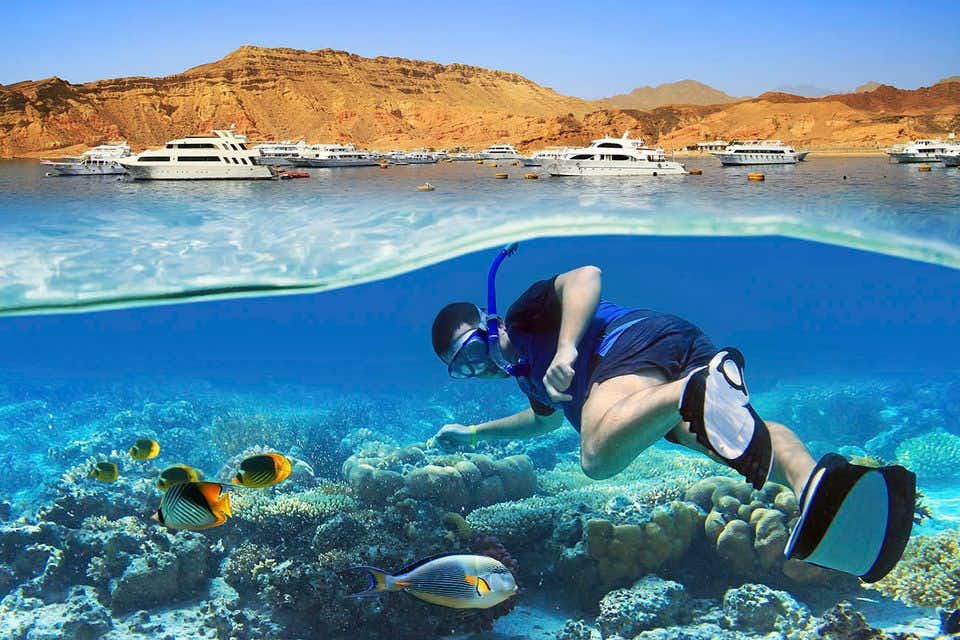 The Red Sea is one of the best snorkelling and diving locations on Earth. Where you can meet unique fish like the Red Sea bannerfish. But also many sharks, sea turtles, dugongs and, sometimes, the whale shark.

You can dive or snorkel the waters of the Red Sea at numerous places. The best spots are Marsa Alam, Safaga, El Quseir, Makadi Bay and Dahab in Egypt. It is unique with its countless.

Sharks at Umm Qamar in Sudan.

The island of Umm Qamar in Sudan is famous for its sharks. You will regularly encounter them along the steep walls underwater. Various types can be seen. Another good spot for sharks is Big Brother and Little Brother. These seamounts attract a striking number of sharks. Including whale sharks, although the chance is small.

The disadvantage is that they are about 50 miles offshore, making it quite a long journey. But the chance that you will see a lot of animals (and few other tourists) is high. Whitetip reef sharks are known for their aggressive behaviour. So always keep a close eye on what is happening around you. And make sure you can tell the species apart.

Ras Mohammed National Park has about 20 different dive sites. With obvious names such as Shark Observatory, Stingray Station, and Eel Garden. Here you can dive for specific species. Like a dive to search sharks, rays and electric eels. The boat trip to the sight is also beautiful. In the clear water, you can already see the coral reefs from the deck.

Ras Mohammed National Park is not only an internationally recognised diving destination. You can also see here how the dry (semi) desert with its characteristic landscape slowly merges with the sea. This area gives a good impression of the natural wealth of the Red Sea as a complete ecosystem.

Wreck of the SS Thistlegorm

The trucks are still on the seabed. The soldiers’ boots are a reminder of the disaster that took place in 1940. German bombers sank the supply ship Thistlegorm to the bottom of the ocean. Much of the supplies are still intact, making a dive into this wreck an illustrious glimpse into the past. It is one of the most famous wrecks in the world and has been featured in numerous documentaries. The wreck is located in the Ras Mohammed National Park.

Several divers have lost their lives in the Blue Hole. But it does not deter the experienced (adventurous) boys. The Blue Hole at Dahab is notorious, but also very special. This hole in the reef is more than 60 meters deep. Most divers go up to 100 feet deep and can’t believe their eyes. The nearby Canyon is teeming with tunnels and caves. The walls are overgrown with hard and soft corals. In any case, it is wise to go here with a guide. For many divers, it is one of the highlights of the Red Sea.

It’s dark all around you. Every now and then you see some movement in the light of your lamp. You mainly see other animals then during the day. A night dive is an ultimate chance to get a complete picture of life on the reef. Octopuses and electric eels, for example, are easier to see. Most dive operators in the various seaside resorts organise these types of dives. Ask around.

Wildlife in the Red Sea

When you go diving or snorkelling, you have a good chance of encountering these special fish and sea creatures:

A dugong in the Red Sea.

The Indian sea cow or dugong is one of the most special inhabitants of the Red Sea. This animal is about 2.5 to almost 3.5 meters in size. This animal was once found all along the East African coast, Asia and Australia. The name comes from the Malay duyung, which means mermaid. These animals may be the cause of the legend. The populations here have also declined considerably, they are rarely seen in the Red Sea.

Spinner dolphins in the Red Sea.

A whale shark in the Red Sea.

This is the largest fish in the world. And not a whale, but a shark. These gentle giants (ranging in length from 8 to 15 meters) do not eat other animals, but plankton. With their special gills they sift them out of the water; a whale shark is often seen swimming with its mouth open. In the Red Sea, the animals are sporadically seen, but when it happens it is big news.

The blue-spotted stingray is a striking ray species. The animal (including tail) can reach a length of one meter. This stingray can be recognised by its bright blue dots on its skin. The color is indicative of its poisonous sting in its tail. This species is seen fairly often in the Red Sea, especially by divers.

The green turtle is a species that gets its name from its greatest threat. The animals are about 1 meter to 1.20 meters tall. They live in the water but come onto the beach to lay eggs. Where it is remarkably slow. Thousands of animals literally ended up on the stove. Females do not become fertile until after 20 (and sometimes as much as 50) years, so this species was almost extinct by the late 1960s. Numerous projects to protect eggs, in particular, are slowly bearing fruit. The rare green turtle is an absolute highlight for many divers and snorkelers. It is regularly seen in the Red Sea, especially around the coral reefs and seagrass fields.

Emperor angelfish are found on many coral reefs. It is remarkable that a youngster looks very different from its parents. They are coloured dark blue with striking white rings, while their parents have blue with yellow lines on their bodies. It takes about four years for the youngsters to lose their rings. Emperor angelfish are often seen around the coral in the Red Sea. Pay special attention to the youngsters, they are almost dazzling.

The royal angelfish is a striking fish on the reefs. They can be recognised by their white, orange and black stripes. These fish live on sponges and are often seen in pairs. Both snorkelers and divers have a good chance of seeing these fish in the Red Sea.

The bluecheek butterflyfish is one of the highlights of the Red Sea. This yellow fish is only found here and is easy to recognise by the dark mask around the eye. This colourful fish shows itself frequently. Sometimes in pairs, but usually in groups you can meet them. They grow about 23 inches long.

The Red Sea clownfish is only found in the Red Sea (and on Chagos, an archipelago in the Indian Ocean). These fish are known from television because they are not sensitive to the poisonous tentacles of the various types of anemones. The anemone benefits from the presence of the fish because through their movements they bring fresh water and therefore oxygen. You can see them on almost all reefs, although sometimes you have to look carefully. These colourful fish have the reputation of being the most photographed in the Red Sea.

The name Sergeant Major comes from the yellow and black stripes that soldiers often wear. These fish like to live in groups and grow to about 6 inches long. They are particularly known for their aggressive behaviour to protect their young. Sergeant majors are also often kept in aquariums.

The Red Sea bannerfish is easy to recognise by the impressive yellow pennant on the head. They usually swim in pairs, but sometimes also in larger groups. The Red Sea pennant is only found here (and in the Persian Gulf). That is why many divers and snorkelers are extra attentive to this species, which you can encounter on most coral reefs.

Like stonefish, lionfish are dangerous. But the chance that this fish will use one of its 18 spines on its back is very small. Unlike stonefish, lionfish is a swimmer, so you see it much faster. There are several species of lionfish in the world. This species is only found in the Red Sea and the Indian Ocean. The Indian lionfish is one of the most special fish in the Red Sea that you see remarkably often. For many it is one of the highlights of the holiday.

The long nosed hawkfish is one of the more striking fish species on the reef. Its typical shape and posture is very different from other fish. This striking red fish is most often seen on sponges and black coral, so look for it when you see these coral species.

Despite its name, the orange striped triggerfish can also be brown. More characteristic are the fine orange stripes on its body. This fish grows to about 30 cm. Its menu includes small fish, sponges and algae. In the Red Sea you can see the green triggerfish mainly on the side of the reef where it gets deeper.

The blue-spotted cornetfish is an elongated fish that is usually just below the water surface. The colour is usually green to silvery, depending on the (sun) light. Blue-spotted cornetfish usually live in groups that contain both younger and older animals. The maximum length is more than 1.5 meters. You will certainly encounter them in the Red Sea, they can be seen on every reef.

The bull-headed parrotfish is one of the many species of parrotfish in the world. The name comes from their strong mouth, with which they can even break coral. Something you can sometimes hear when they scrape the coral and spit it out again. This way they keep the coral young and new coral can grow. These fish can grow up to 40 cm long. Parrotfish are permanent residents of the reef and you will always see a few.

This parrotfish species (like many other species) comes in all kinds of color schemes. The remarkable thing is that the animals are born as females and eventually (after various stages) go through life as males. These fish can grow up to 90 cm. You often come across this species in the Red Sea. There is no real search, they will swim by.

Best time to snorkelling and diving in the Red Sea

Most tourists come here to enjoy the sun, others mainly to dive or snorkel. Nowadays it is mainly a mix between the two. The best time for the underwater world is spring, autumn, and winter. The water is then 22 degrees, so it is perfect for snorkelling.

In the summer (June to August) it can reach 40 degrees here. And the hotels are full of sun worshippers.