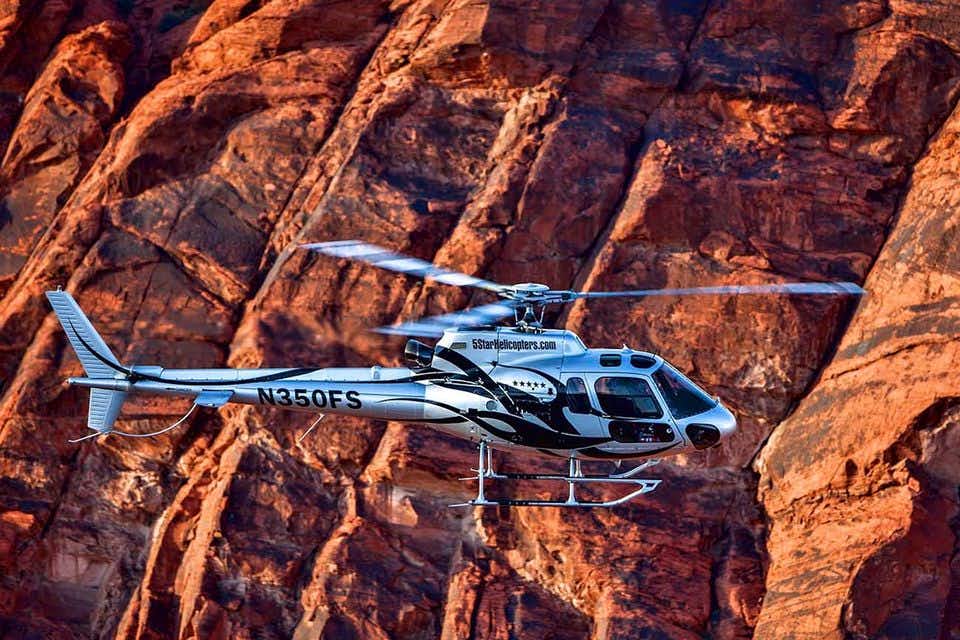 A helicopter flight over the Grand Canyon is a unique experience. Only then will the immense size of these natural phenomena be seen. It has been on my wish list for a long time.

When I got in on the outskirts of Las Vegas I was a bit nervous. But I found it mainly exciting, because what was I going to see?

From which locations can I take off?

You can depart from various locations. Including Las Vegas and Lake Powel, but also on the South Rim of the gorge you take a flight.

Differences between the various helicopter tours

Keep in mind that if you take off from Las Vegas, the flight is longer and therefore more expensive. The time that you are in the Grand Canyon is limited. That was the only thing that disappointed me a bit. Although I thought flying over the Lake Powel was very nice again. As a kind of extra.

The flight from the South Rim is actually the best choice. Especially when you consider the price-to-time ratio you get in the Grand Canyon.

What can I expect on the helicopter flight?

Keep in mind that much of the Grand Canyon is off-limits to helicopters. You won't see just about everything you see from the various vantage points from the helicopter.

But there are parts of this immense gorge where helicopters are allowed to fly. Among other things, they fly between the enormous walls, which is spectacular. They are also allowed to land in various places, so that you can actually stand in the Grand Canyon. And take pictures.

Best time for a helicopter flight in the Grand Canyon?

The best time for a helicopter flight is early in the morning and late afternoon. The light will be soft, creating the best circumstances for video and photos.

How much does a helicopter flight in the Grand Canyon cost?

It is not cheap, but very much. Take into account about $ 200 for the shortest flights, where you can also board for $ 500 for longer excursions. Or one with a champagne breakfast in the Grand Canyon for example.

Judge for yourself what suits you best. It doesn't hurt to compare prices. Sometimes there are special promotions, so you can negotiate a fair amount of money.

Show all Bucket List Tips on United States of America

Death Valley flowers in bloom
Flowers in full bloom in Death Valley National Park. It happens after a few rain showers, making one of the driest places in the world in bloom. An ocean of colours awaits you, what you might have seen on social media. But you can see it yourself in the United States with some good planning.
Read more
Niagara Falls

Niagara Falls
The Niagara Falls is a once in a lifetime experience. You must hear and feel the water, as well as experience its brute force. It is useful to prepare your visit in advance to get the optimal experience. And visit the waterfalls in Canada and in the United States. These are the best tips for Niagara Falls.
Read more
Pan-American Highway

Rocky Mountains
The Rocky Mountains are a mountain range in the United States and Canada. It is home to numerous famous national parks. But there is more to discover, much more. The rugged nature in particular appeals to many people. Which will quickly make you feel insignificant.
Read more
See snow in the Grand Canyon

See snow in the Grand Canyon

See snow in the Grand Canyon
See the Grand Canyon covered with snow. It is a unique phenomenon in winter: A snow shower in one of the most beautiful panoramas on earth. And you can experience it. Although you do need some luck. Or of course you travel there when it snows.
Read more
Watch Bubble-net feeding humpbacks

Watch Bubble-net feeding humpbacks
Whales hunt for fish using a specific tactic. It is called bubble-net feeding. This behaviour can be seen in particular in Alaska. But you always need some luck, no guarantees.
Read more

all 29 articles on United States of America