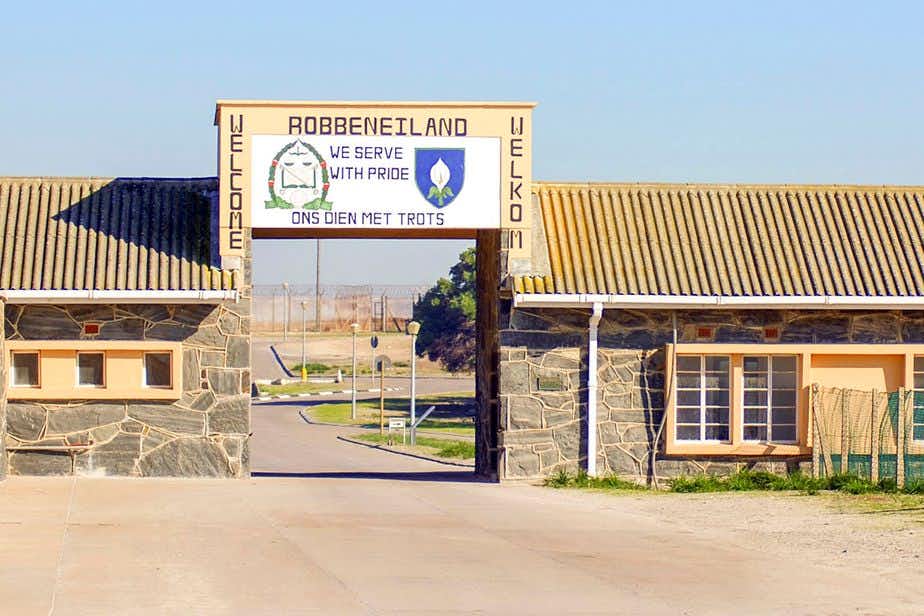 Robben Island is off the coast of Cape Town, most know it because it was the island where Nelson Mandela was imprisoned. It’s an intriguing place to visit.

This island is one of the most infamous islands in the world. It was a penitentiary for almost 400 years, to keep criminals and exiles. Not many people know that it was the VOC (the Dutch East India Company) who turned the island into a penal colony in the early 17th century.

It was particularly used to imprison unruly seamen. And between 1836 and 1931 it was used as leper colony. Then in 1959, the island was turned into a high-security prison by the apartheid regime in South Africa. A visit it will heighten your admiration for Mandela, who passed away in 2013.

Robben Island became world famous because of one particular inmate: Nelson Mandela, who was imprisoned here for 18 years. There is a limestone mine on the island, where the prisoners were made to work. The bright reflection of the white limestone and the fine dust permanently damaged the eyes of the prisoners, including those of Nelson Mandela.

Many prisoners have tried to escape by swimming towards the mainland, but only three (on record) made it ashore. The water around the island is ice cold because of the cold current coming from Antarctica.

The last political prisoners were released from the island in 1991, and the prison officially closed in 1996. Three years later it was added to the UNESCO World Heritage List.

Various ex-prisoners have given tours to tourists through the cells and the museum for a long time. That's how I experienced it. And it was more raw than expected. A visit to Robben Island is intense and it makes you realise how important Mandela's role was.

From the Waterfront in Cape Town, you can hop on a fast ferry to Robben Island. Make sure you have already bought a ticket online in advance. These excursions are popular and regularly sell out.

Meerkat tour in Oudtshoorn
Meerkat are a popular tour in Oudtshoorn in South Africa. The vast plains around this city are one of the best places to see the playful meerkats in the wold. It’s a wonderful excursion to do.
Read more
Nelson Mandela Capture Site in Howick

On safari in South Africa
Going on safari is a popular activity. And South Africa is one of the best places to do this. In most national parks, you can spot wildlife from your own (rental) car. Or you can book a guided safari tour. There are many national parks and private game reserves to choose from. Some a very luxurious, other offer just a basic experience.
Read more
Penguins at Boulders Beach