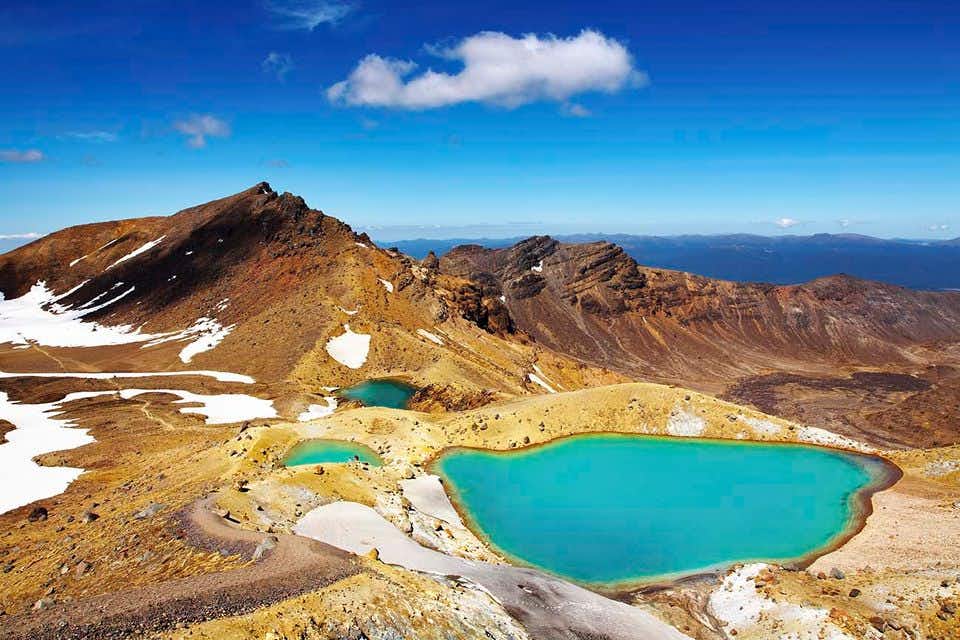 Tongariro National Park is a famous natural area in New Zealand's North Island. It is best known for its mountains with snowy peaks, bright blue lakes and three active volcanoes. You can go out on one of the most famous walking tracks of New Zealand, or simply admire the landscape.

The nature reserve is approximately 796 km² in size. Which is remarkably large. In 1887, chief Te Heuheu Tūkino IV gifted these volcanoes to the New Zealand government. That’s when the area was declared a national park. It is the first nature reserve to be declared a national park in New Zealand. In 1990 it was added to the UNESCO World Heritage List.

Tongariro National Park has three active volcanoes. They have wonderful names: Mount Ruapehu, Ngauruhoe and Mount Tongariro. Ngauruhoe was featured as Mount Doom in the Lord of the Ring movies, so you can have a guess at how amazing the landscape of Tongariro is.

The park is one of the best attractions ofNew Zealand. Yes, this is Lord of the Rings, but for real. It has numerous sights and highlights, and weird animals, including the brown kiwi.

In this article I have also listed the best excursions. Because in addition to hiking, you can also go mountain biking, kayaking and rafting. In winter you can go skiing. And the most beautiful walking routes, which differ greatly in length. So that you can also hit the road with less time.

The Tōngariro National Park Visitor Center is perfect to start your journey. You'll find all current information about the hiking routes, for example whether some hiking trails are closed. You can also get information about  the best locations to see wildlife. You can also get a lot of tips for campsites and other accommodations, although it is smart to arrange this in advance. The visitor center is located in Whakapapa Village.

Whakapapa Village is the starting point for most travellers. You will find hotels and other places to stay. Numerous organised excursions also depart from Whakapapa Village. And you will find countless shops for all your groceries, such as food and drinks. Logically there are also restaurants and cafes in the town.

The famous Mount Tongariro is a volcano of 1,978 meters. It has several craters on the top. The volcano is located 20 kilometers southwest of Lake Taupo.

Mount Ngauruhoe acted as Mount Doom in Lord of the Rings. When you see him you recognise him from the movies. It is 2,287 meters high and was very active until 1975. He is now calmer, although now and then he still shows a large ash cloud.

Mount Ruapehu is 2,797 meters high, making it the highest point on the North Island. This volcano has three peaks: Tahurangi (2,797 m), Te Heuheu (2,755 m) and Paretetaitonga (2,751 m). In the crater you will find a crater lake that often dries up in summer.

The famous Emerald Lakes in Tongariro.

The Emerald Lakes are the most famous place in Tongariro National Park. You can see these strikingly coloured lakes in many photos on social media. The lakes are full of minerals, hence the striking green or blue color. You will see the Emerald Lakes when you walk the Tongariro Alpine Crossing.

Tongariro is also the site of one of New Zealand's most famous hikes. The Tongariro Alpine Crossing is a one-day hike straight through the Tongariro National Park.
It takes most people about 7-8 hours. Start early in the day, because the hardest part is at the beginning. And so you have enough time for this ultimate hike.
The walk is considered one of the most spectacular walks on the North Island. It leads along mountains, lakes and offers unprecedented views. In which you walk along both Mount Tongariro and Mount Ngauruhoe, and view the Emerald Lakes. This is the hike if you want to see how beautiful Tongariro National Park is.

Tongariro National Park is located on the south side of Lake Taupo in New Zealand's North Island. From there it is still an hour's drive. There is good public transport available; buses run. From cities such as Auckland and Wellington it is a 4.5 drive to the national park.

Bungee jump in Queenstown
Bungee jumping became popular in Queenstown. This town in New Zealand had the first commercial bungee jump. Local businessman AJ Hackett began selling the first bungee jumping (locally spelled bungy jumping) experiences from the Kawarau Briddge in 1988. This drop is only 43 metres, but includes the famous dip in the river below
Read more
Fox Glacier

Fox Glacier
The Fox Glacier in New Zealand is one of the most accessible glaciers in the world. It has bright blue ice, which means it's very hard. You can take a walk up the glacier with a guide, which is an amazing experience. Especially when you walk in the middle of all that blue ice.
Read more
Glowworms of Waitomo

Glowworms of Waitomo
The glowworms of Waitomo in New Zealand are world famous. Have you ever seen glow worms in a cave? It's a unique, natural light spectacle fit for a fairytale. It's an amazing light show put on by mother nature, and Waitomo is one of the best places to see it.
Read more
Kayaking in Milford Sound

Kayaking in Milford Sound
A kayak trip in the world famous Milford Sound is unique. I went out with a guide and met several animals. And saw waterfalls in the rugged mountains of Fiordland National Park.
Read more
Redwoods Treewalk Rotorua

Redwoods Treewalk Rotorua
Redwoods Treewalk Rotorua is a unique hiking trail in New Zealand. It's a path through 115-year-old coastal redwood trees in the majestic Redwood Forest. The path through 22 burgen over a total length of 533 meters. In the evening, the trees are artistically illuminated. It gives a good indication of New Zealand's mystical power.
Read more
Te Anau

Te Anau
Te Anua is the base from which to head to Milford Sound. The town is small and shows how New Zealanders like to showcase its natural wonders: no big fanfare, and controlled tourism options.
Read more

all 13 articles on New Zealand